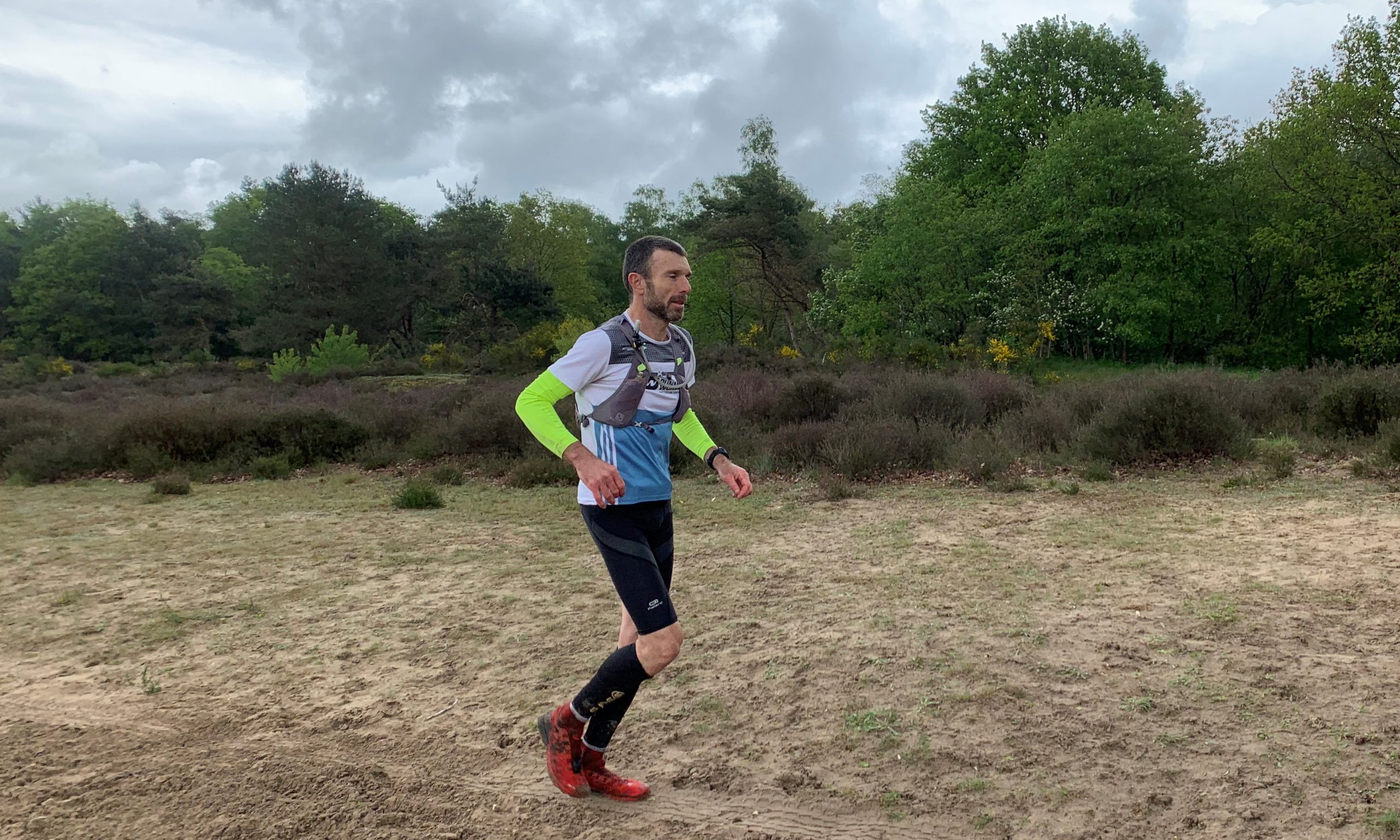 Two weeks ago, the Dutch media reported that Addie van der Vleuten from Best, the Netherlands ran the Pieterpad-trail in 78 hours and 10 minutes. That makes him the fastest ever!
The Pieterpad is the most famous long-distance trail in the Netherlands. The path leads from Pieterburen on the North Groningen Wadden coast to the Sint-Pietersberg in South Limburg. A distance of almost 500 km.

With his performance, Addie raised money for charity. His father died of leukaemia in 2019 and in tribute to him he raised money for KWF Kankerbestrijding (cancer fund). On Friday afternoon 14 May 2021 he left Pieterburen and on Monday evening he arrived at the Sint-Pietersberg in South Limburg. “It was very beautiful and heavy. I ran almost continuously and in the night I had a lot of rain. I’d run with rain pants, raincoat and gloves. That was a pity.” He was aided by a camper van in which he could sleep, shower and change clothes. On some stretches, other ultra-runners also ran along.

Following this impressive performance, we received the following email from another ultra-runner Alex Olieman:

“I have previously enjoyed applying the formulas from “The Secret of Running“. Last week the fastest time of the Pieterpad-trail was greatly improved and I hope that you can help me to go even faster and I have two questions about that:

Alex Olieman is an enthusiastic and talented ultrarunner. Alex ran the 120 km of the unofficial Netherlands Championship ultra-trail edition during the 2019 Indian Summer Trail in 11 hours 17 minutes. The 157 km of the May 1, 2021 UltraPad Netherlands (UPNL) went in 15 hours 24 minutes.

In this article, we answer Alex’s questions.

The energy balance of ultra-running

Earlier we wrote an article about ultra-running following the phenomenal performance of American Jim Walmsley, who ran the 100 km in a time of 6 hours 9 minutes and 25 seconds in Arizona on January 23, 2020. We summarize this article briefly below and subsequently we will discuss the energy balance of the Pieterpad-trail.

We wondered how it is possible to run for 6 hours at a speed of 16 km/h? What happens to the fuel supply (especially the carbohydrates/glycogen) in his muscles? For us ordinary people, the muscles are already empty after about 30 km and we are happy to make it to the end of the marathon.

The secret of the marathon and the ultraloop: the optimal fuel mix

In our books and also in several articles we published, we have previously inferred from biochemistry that the maximum energy production in the muscles of a trained top athlete (fat percentage only a few percent) from the aerobic conversion of glycogen is 7.76 Watts/kg.

The energy production from the aerobic conversion of fatty acids is much lower, namely only 2.36 Watts/kg. This difference is, as we know, the reason for ‘hitting the wall’: when the supply of glycogen has ran out, your muscles have to switch to fatty acids and that provides much less energy/power.

In an article we have already shown that you can easily calculate how fast you can run (v) with a certain power (P): v = P/1.04. For example, we calculate the maximum achievable speed if our muscles were to use glycogen and fatty acids for 100%.

The above clearly shows that the speed drops enormously as the muscles switch from glycogen to fatty acids!

In reality, your muscles never use either 100% glycogen or 100% fatty acids, but a mix of both. If you run slowly, the percentage of fatty acids is high and that of glycogen is low. If you start running faster, your body is forced to use a higher percentage of glycogen, otherwise you will not get the required power.

We have made a further analysis of the existing world records between 5 km and 100 km. For each distance, we know the total power that the world record holders needed to run their times. We then calculated at which fuel mix (percentage of glycogen and percentage of fatty acids) these power/speeds are possible. The result is shown in the table below.

During the Vienna Breaking2 marathon Kipchoge consumed about 1892 kcal of glycogen. In order to be able to deliver this, he has of course also taken maximum sports drink along the way. The maximum absorption of carbohydrates through the gastrointestinal tract during the marathon is often set at 40 grams/hour in the literature. During 2 hours this makes a contribution of 2*40*4 (kcal/g) = 320 kcal.

This means that the glycogen supply in Kipchoge’s body at the Vienna starting line for Breaking2 should therefore have been at least 1892-320 = 1572 kcal. This value corresponds well to literature data on glycogen supply in athletes.

For the 100 km we made the same calculations, whereby we have now equated the minimum available stock at the start line with the value of 1572 kcal. Subsequently, we calculated how much carbohydrate intake was needed to be able to supply the consumption. The result is an intake of sports drink/gels of 1059 kcal or 44 grams per hour. This value is therefore slightly higher than the generally applied maximum of 40 grams per hour.

To calculate what time is theoretically feasible for the Pieterpad-trail, we need to estimate how much time our runner will rest and sleep on the way. We use the example of Alex, who wants to rest for 5 minutes per hour and sleep 2.5 hours a day. This brings us to a distribution of 18% rest and 82% running. The theoretically best achievable performance on the Pieterpad will then be 500/12.26/0.82 = 49.72 hours.

Theoretically, based on the energy balance, it is therefore possible to run the Pieterpad-trail in rounded 50 hours. If we may extrapolate previous achievements of Alex Olieman to the 500 km of the Pieterpad, Alex’s record attempt does not seem to be without a chance.

Of course this is a theoretical calculation: Hans and Ron do not even think about trying this themselves…. 😀 We are already fully exhausted after the marathon and are certainly not able to run hundreds of kilometers with minimal rest and minimal sleep. We have great respect for ultra-runners who continue days in a row in weather and wind!