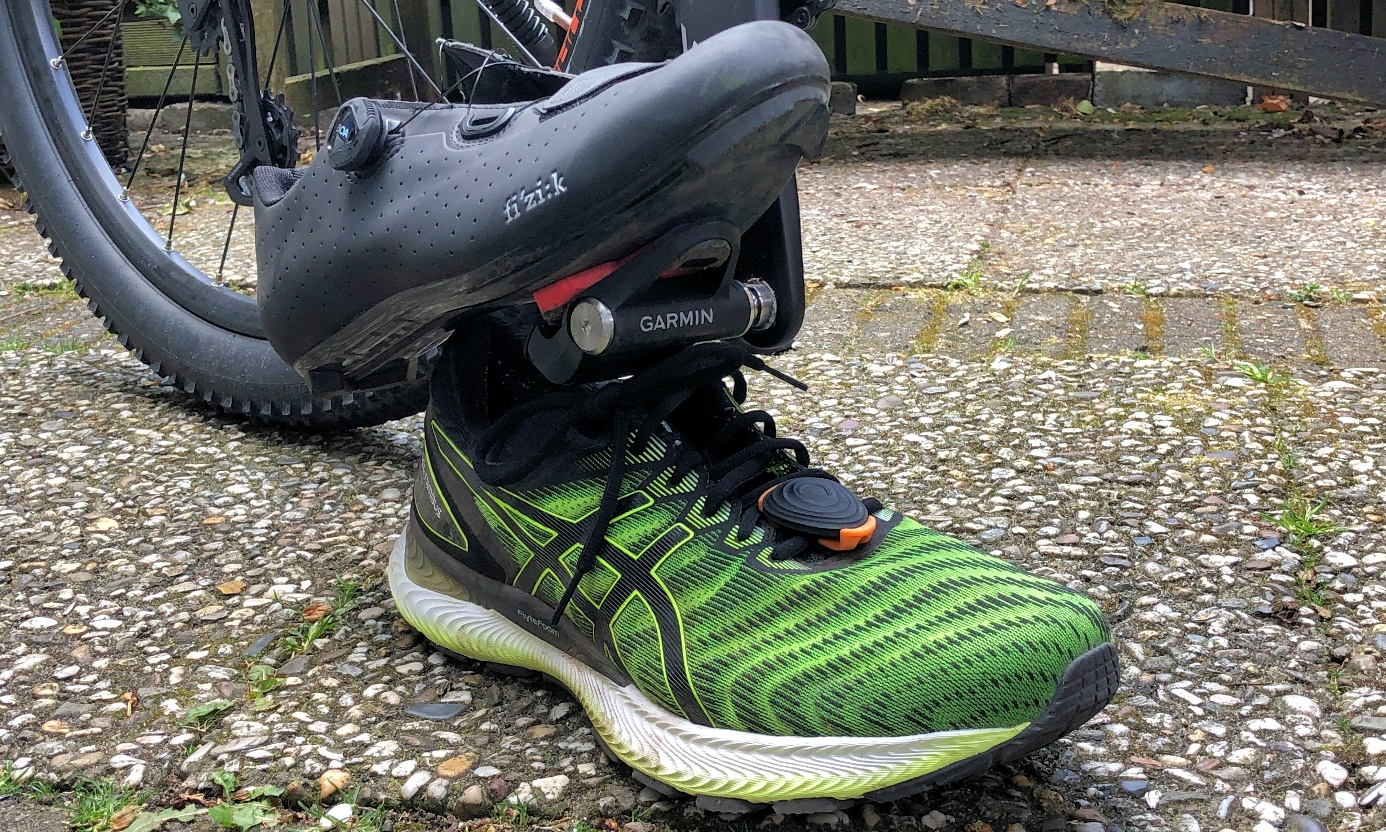 This article – just like last week’s – is about the experiences of author Hans van Dijk, who was confronted with a knee injury on May 4th 2019 and has since been forced to switch from running to cycling. Readers will know Hans as a lifelong runner and author of The Secret of Running. 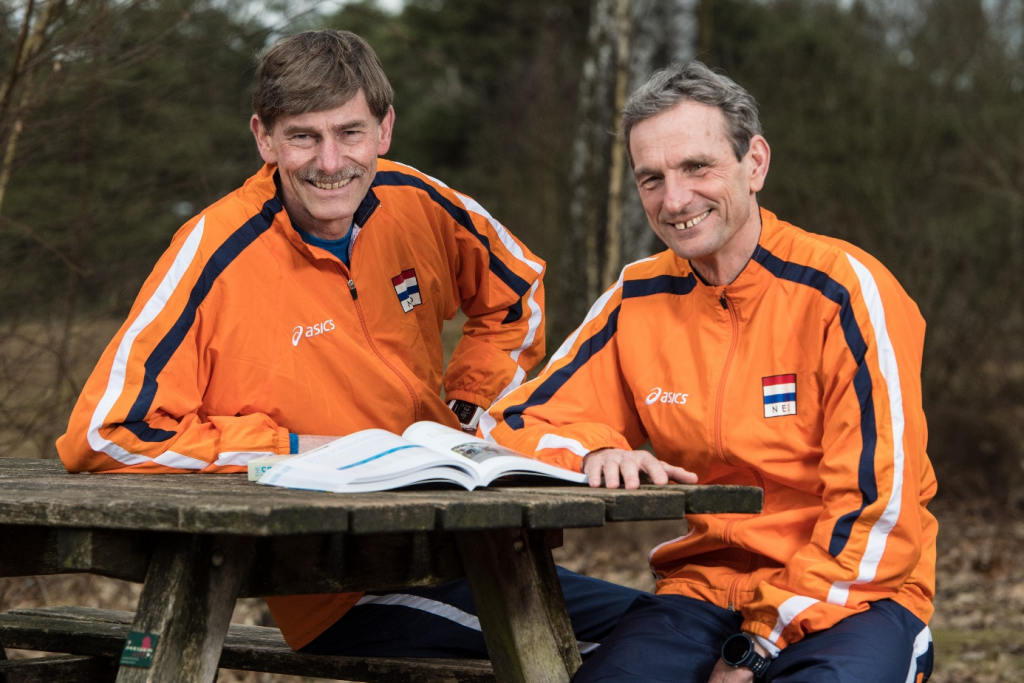 Ron van Megen and Hans van Dijk are well-known from their books on running and cycling. Hans and Ron use a Strydv3 footpod in running and a Garmin Vector 3 pedal power meter in biking.

Last week we discussed his experiences of the past year. From October 2019 Hans started cycling, first on his old grandpa bike (including the child seat for his granddaughter), but soon on an MTB with power meter. With that power meter, the running watch from Hans (the Garmin Forerunner 935) calculates his cycling VO2 max every day. His VO2 max continuously increased to a value of 61 ml/kg/min. Hans was pleasantly surprised, since it had been about 6 years since he reached such a high value in running. In addition, Hans has only been cycling for half a year and has run for 40 years. Would he actually be a better biker than a runner? Time will tell.

In the previous article, we discussed the significance of the VO2 max as a measure of the performance in running and cycling. In the current article, we will explain how to use power in Watts as measured by the Stryd when running and by power meters like the Garmin Vector 3 when cycling. We will show you how to calculate how fast you can run and bike with a certain power in Watts.

How fast can you run with your FTP?

In our book The Secret of Running you can read that your running speed is directly proportional to the specific power, which is the power in Watts divided by your body weight in kg.

Of course it is true that you can only maintain a certain power for a certain time. The longer the distance, the lower your power will be. To deal with this, we always calculate with the specific Functional Threshold Power (FTP), which is the specific power that you can maintain for 1 hour.

In our book we also showed that there is a relationship between FTP and VO2 max:

In practice, the weather conditions, the altitude and the course will also have an influence. All these factors are discussed in our books and on our calculators on our website. The race time at various classic distances is shown in the table below (which applies to ideal conditions). 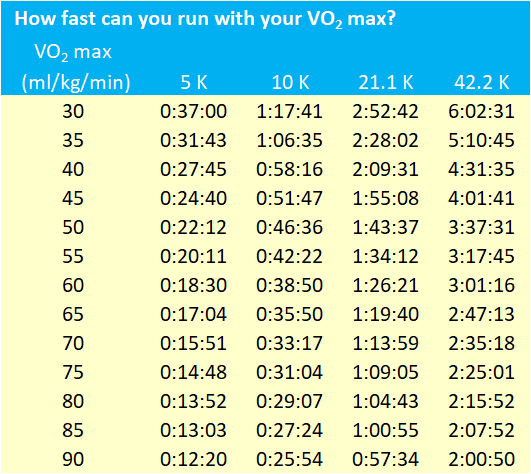 We will simplify this in this article to 250 Watt. This is the maximum power that Hans can maintain for 1 hour. In the training he naturally produces less power, often around 200 Watts.

How fast can you bike with your FTP?

Cycling is a bit more complicated and more factors play a role. Your bicycle to start with. On a race bike, both rolling resistance and air resistance are a lot lower, so you can bike much faster with the same power than with an MTB or a city bike.

With our cycling model based on the universal theory of sports (see also www.theSecretofCycling.com) we have made the table below, which shows how fast Hans can bike (in km/h) with different powers and with different bikes. The calculated speeds apply when he bikes alone, in a group you can go a lot faster because you benefit from lower air resistance in the pack. In the training Hans produces 150 Watts when he takes it easy, 200 Watts is a normal workout for him, for 250 Watts he needs to push hard and 300 Watts he can only maintain during short stretches. The speeds from the table match well with the experiences of Hans on his city bike and on his MTB. He has not yet used a race bike.

The wind also plays a much greater role than in running. For a headwind we made the table below, also with our model. 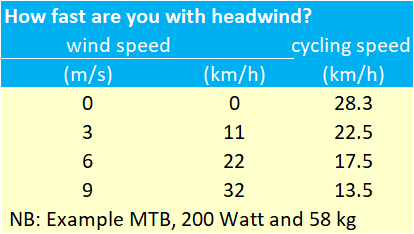 You can see that with a headwind of 9 m/s (32 km/h, wind force 5) the attainable speed becomes less than half than without wind. Unfortunately, when cycling, it often seems that you have a headwind all the time. This is due to your ‘own wind’. After all, if you bike 28 km/h in windless weather, it seems as if you have a headwind of 28 km/h!

The course also plays a major role. Uphill your speed drops considerably, as the table below shows. Hans bikes mostly in the National Park Utrechtse Heuvelrug, where slopes of 3% occur and he sees his speed drop accordingly. 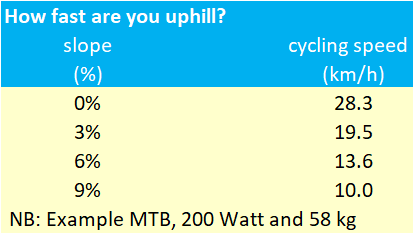 Finally, your body weight is very important, especially uphill. Here Hans has the big advantage that he is a lightweight with his 58 kg. In the table below we have calculated how much slower he would bike if he gained weight.

You can see that the body weight has a big impact uphill, on the flat the impact is much smaller. This is also the reason that the real climbers are always lightweights and the classical bikers are often a lot more robust. Fabian Cancellara, with his 81 kg, was able to produce high Wattages on the flat, but uphill he was always beaten by the lightweight climbers!

Which is the better performance indicator: VO2 max or FTP?

To answer that question, we must first of all realize that oxygen is used in our body to produce energy from glycogen and fat in the muscles. The more oxygen we use, the more energy is produced and the more power our human engine can produce. In fact, your VO2 max and your power are 2 different ways to display the same thing, namely the capacity of your human engine and thus your performance in sports. It is therefore not surprising that the two measures can be converted into each other, as we saw above:

It should be noted that this formula has been derived based on a metabolic efficiency of 25% (i.e. 25% of the energy from the food is converted into mechanical energy, the other 75% is converted into heat causing us to sweat). The 25% is a very realistic value for top athletes, but ordinary people will have a slightly lower metabolic efficiency (down to 20%) and therefore a slightly lower FTP.

The VO2 max has traditionally been the gold standard for determining the capacity of the human engine and the performance in sports. Still, there are some caveats here, such as the aforementioned difference in metabolic efficiency and the fact that measuring your VO2 max in the laboratory is a hassle that you will not do every day. The main advantage of the VO2 max is that it is an established parameter, which is widely used especially for running and can easily be translated into running performance.

However, fundamentally your power/FTP is the best measure of the capacity of your human engine and your performance in sports. Regardless of your metabolic efficiency, your power immediately reflects how much energy your human motor can produce per unit of time. Your power/FTP can also be used directly to calculate how fast you can run and bike, depending on the circumstances (weather, altitude, course, bike/running gear and air resistance). This is also possible with your VO2 max, but it remains an indirect measure. Another consideration is that with modern sports watches and power meters such as the Strydv3 for running and the Garmin Vector 3 for cycling, power can be measured daily and in real time. Your watch will give you a number for your VO2 max, but it is in fact derived from the power and not measured directly. Your power/FTP reflects your actual performance, which you can use to evaluate the effect of your training.