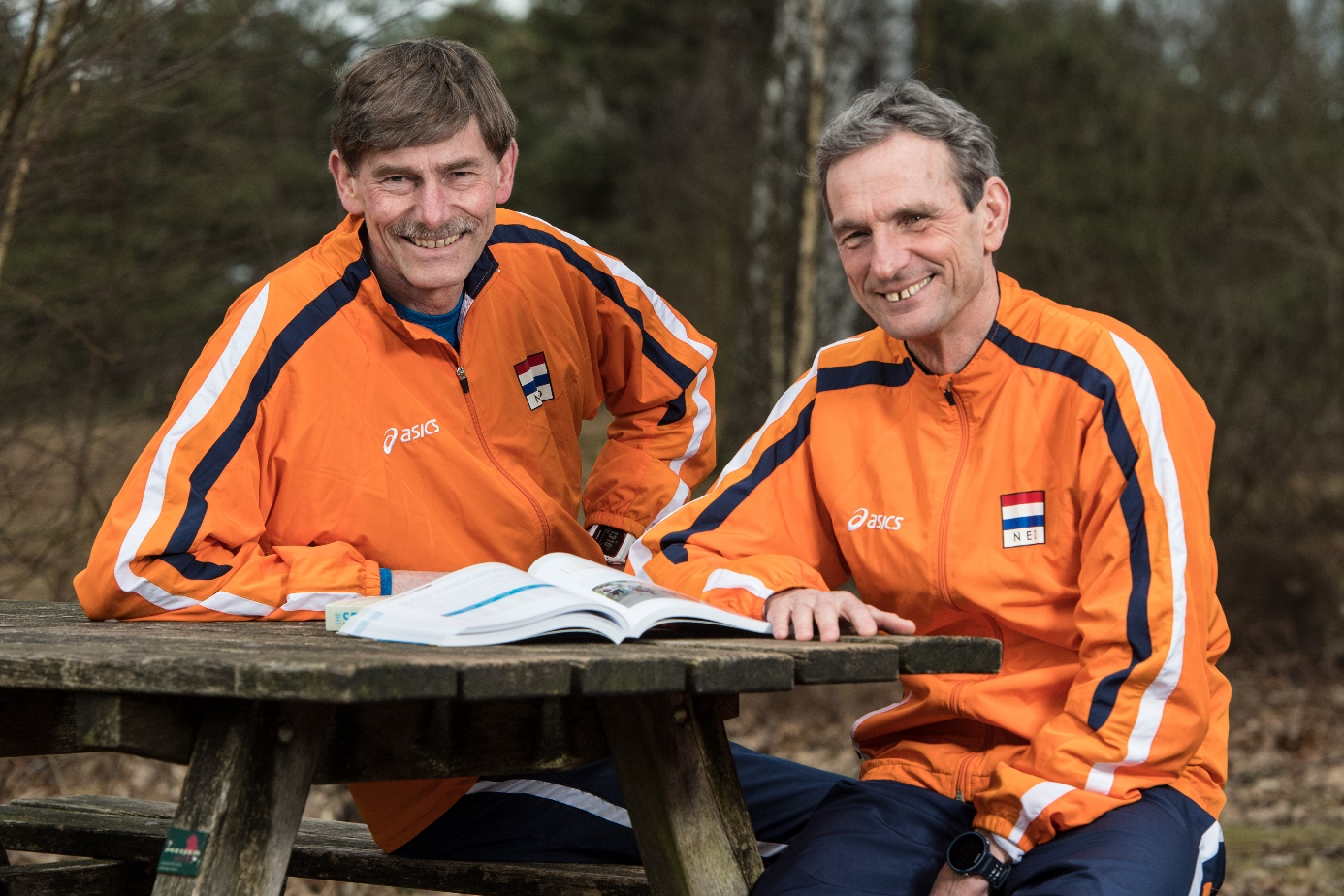 Ron van Megen and Hans van Dijk are well known for their running and cycling books. The books have now been published in five languages.

This article is a follow-up to 2 previous articles we wrote based on the experiences of author Hans van Dijk, who on May 4, 2019 suddenly was confronted with a swollen left knee and has since been forced to switch from running to cycling. Readers of ProRun will know Hans as a runner and author of The Secret of Running and The Secret of Cycling.

In the first 2 articles we looked at his experiences of the past year. In October 2019 Hans started cycling, first on his old granddad bike (including the child seat for his granddaughter), but soon on a MTB with power meter. With that power meter, Hans’s sports watch (the Garmin 935) calculates his bicycle VO2 max every day. After a start-up period, his VO2 max increased continuously to an incredibly high value of 65 ml/kg/min. Hans asked himself “am I a runner or a cyclist”. On the other hand, he remained suspicious of the value of 65, as he only has a running VO2 max of around 60. His Garmin watch also predicted unrealistically fast running times based on those high VO2 max values (see the pictures).

In another article we have already analyzed the Race Predictor of the Garmin and we came to the conclusion that it systematically gives too fast/unattainable times at a certain VO2 max. But what about those high values for the VO2 max itself? We couldn’t believe that Hans would have a cycling VO2 max of 65, while his running VO2 max is 60. Moreover, Hans has only been cycling for a year now after having run for 40 years.

So we decided to put it to the test and do a bike VO2 max test at the SMA Central Netherlands in Amersfoort.

What is the SMA?

The SMA Central Netherlands is a centre of expertise for endurance sports, especially in the field of running, cycling and triathlon. It was founded by sports doctor Guido Vroemen. Guido is sports doctor, medical biologist, exercise physiologist and qualified triathlon coach. He is also trainer/coach of various (Olympic) athletes and medical doctor of the Dutch Triathlon Federation. Guido is an authority in the field of exercise physiology and has been an active runner, cyclist and triathlon athlete for many years.

What is the VO2 max and how is it determined?

The VO2 max is generally regarded in sports physiology as the gold standard for physical fitness. As early as 1923, the English physiologist A.V. Hill discovered that the oxygen consumption of runners increased at increasing speed to a maximum value, which could only be sustained for a short time. He therefore stated that the performance in running depends primarily on the oxygen absorption capacity of the cardiovascular system and called the maximum capacity the VO2 max. Many researchers have since confirmed that the VO2 max is indeed the most important parameter for performance in running,cycling and other endurance sports.

The VO2 max is defined as the maximum volume (V) oxygen gas (O2) that the human body can absorb per unit of time for physical exertion, measured at sea level. The VO2 max is expressed in the number of milliliters of oxygen per kilogram of body weight per minute (ml O2/kg/min).

The VO2 max is classically determined in a laboratory by measuring oxygen intake and oxygen emissions during prolonged and increasing intensive physical exertion. The VO2 max is reached as the amount of oxygen absorbed does not increase, despite increasing effort. The running VO2 max is determined on a treadmill and the bike VO2 max on a bike ergometer.

What does the VO2 max depend on?

The VO2 max appears to be mainly dependent on:

The VO2 max of the world champions is around 90 ml/kg/min, as you can read in our books. In exceptional cases even higher values have been measured, such as the Norwegian Oskar Svendsen  (up to 96.4!), but in those cases lower efficiency limits performance. For mere mortals, the table below gives an image. Normal values for young men are 40-45 and for young women 30-35 ml/kg/min. Even with the most fanatical training, ordinary people can never reach the values of the world’s elite athletes. 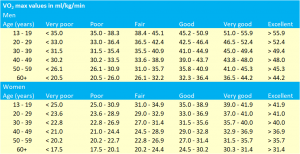 How fast can you run with a certain VO2 max?

In principle, your running speed is directly proportional to your VO2 max. In practice, the weather conditions and the course will also have an impact. All these factors are covered in our books and on the calculators on our website. What time you can run at various classical distances we have shown in the table below (which applies to ideal conditions). 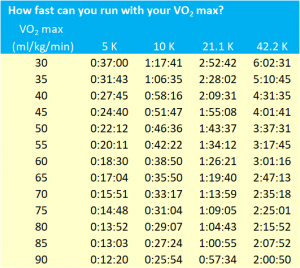 Hans and Ron’s past results

Hans and Ron have had such research carried out several times in the past. The pictures give an image of the treadmill, the breathing measuring equipment and the ECG measurement.

Hans during an exercise test on the treadmill with continuous ECG control and gas analysis by sports doctor Bernard te Boekhorst of SMA Central Netherlands.

The results of Hans and Ron’s running tests in recent years are shown in the tables below.

This is a good match for his running times. On the 5K he usually runs around 18:30. Obviously there is some variation depending on the shape of the day and the weather conditions.

His running times are even slightly better than matching this VO2 max and especially his endurance is excellent.

On 29 December 2020 Hans and Ron both took an anaerobic threshold bike test at the SMA. In the test, they used their own MTB’s. The rear wheel was replaced by a calibrated Cycle 2 ergometer. The Cycle 2 imposes very precisely the required power. For performance-oriented cyclists, wattage is a familiar notion. Many cyclists have discovered it to improve their performance in a ride and evaluate it afterwards and therefore invest in a power meter on their bike. For runners this has also been available for some time, for example in the form of the Stryd footpod which can be attached to the shoelaces.

The resistance depends on the weight and the age. The tables below show the measurement protocols of Hans and Ron. 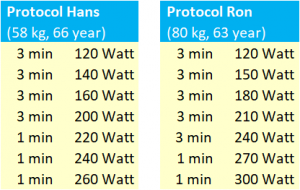 And what was the result?

The results were very convincing for both Hans and Ron: their bike VO2 max was considerably lower than their running VO2 max!

For Ron, the difference is even bigger. His bike VO2 max was only 33.8 ml/kg/min and therefore approximately 25% lower than his running VO2 max of 45!

The conclusion is clear: Hans and Ron are not better cyclists than runners, but the opposite is the case. The high VO2 max values of the Garmin sports watch are clearly wrong! In a subsequent article we will discuss possible reasons for this and the causes of errors in power meters and the calculated VO2 max values of Garmin.

The fact that Hans and Ron are indeed better runners than cyclists is also logical in hindsight, of course, given their past. Both have been running for 40 years and have only been cycling for a year. Hans cycles much more often and more intensively than Ron, which will probably explain that his results are relatively better (5% difference in VO2 max against 25% difference).

The cause of their relatively poor performance on the bike will be the training of the specific leg muscles (such as the quadriceps and hamstrings), which are used differently when cycling than when running. Both also experience problems with insufficient power in the legs rather than insufficient fitness, they make trips of 3-4 hours with ease at a snappy pace. It was also striking that the anaerobic threshold was relatively low for both, which may be an indication that the leg muscles were overloaded too quickly and started to form lactate, while the heart lung system still had sufficient capacity to supply oxygen.

The bike test has produced very clear results. Hans and Ron will have to train more and more specifically to further develop (the strength in) their leg muscles. A tip from Guido Vroemen was to do hill training more often with maximum power and strength development (i.e. with heavy gear and low cadence). Ron and Hans will therefore be training a lot in the coming months on the Strava segments of the Utrecht Heuvelrug (Amerongse Berg, Aart Jansen) in the Netherlands.

There are also several remaining questions, which we will be picking up in the near future. For example, Hans’s power meter was found to give data which were around 10% too high. How is this possible? We will investigate this further in consultation with the suppliers (Garmin Vector 3 and Favero Assioma Duo). And is this the reason the Garmin indicated too high VO2 max values or is there more to it? We will discuss these questions in a 4th article.

In our earlier articles we showed that VO2 max and power (especially the Functional Threshold Power FTP) are really 2 different ways to display the same, namely the capacity of your human engine and therefore your sports performance. It is therefore not surprising that the two concepts can be converted into each other: FTP (in Watt/kg) = 0.072*VO2 max (in ml/kg/min).

The great advantage of power meters and modern sports watches is of course that the power and your FTP can be measured daily and in real-time. From the power data, your watch can easily deduce your VO2 max, which you will see daily too. We also think this is a big plus because you can see the effect of your training on a daily basis and adjust the training if you wish. Nevertheless, our bike test has reminded us that serious errors can occur in the data of power meters and multisport watches such as the Garmin.

To double-check everything, Ron will do another running VO2 max test at the SMA in January 2021, so that we can tell the difference between his current running and bike VO2 max (Hans doesn’t dare take such a test yet because of his knee). And we will certainly continue to test and examine power meters, but in combination with a lab test. Better safe than sorry!