“Hello Ron! This morning at the All4running shop two ribs from my body exchanged for a Stryd and a Garmin Forerunner 245.” This e-mail came from Walter van Gelderen.

Walter is an enthusiastic runner, member of the Dutch national athletics masters association avVN, and 80 years. Walter has ambitions. He gives himself a real chance to sharpen the Dutch record in the M80 (category 80-84 years) in the half marathon. Walter also sees opportunities for the podium at the Dutch Championships in his age group at various other distances.

The Dutch record M80 half marathon is currently being held by Willem Landman from Lelystad (the Netherlands) with 1:57:11. Willem ran this record in 2017 during the Amsterdam Marathon. This marathon has a certified course and offers participants the assurance that the distance is correct. The half marathon point is also certified.

For the whole marathon Willem finished in 4:03:57. That was also a Dutch record for his age group.

Walter wants to make an effort to improve Willem. Who is Walter van Gelderen? 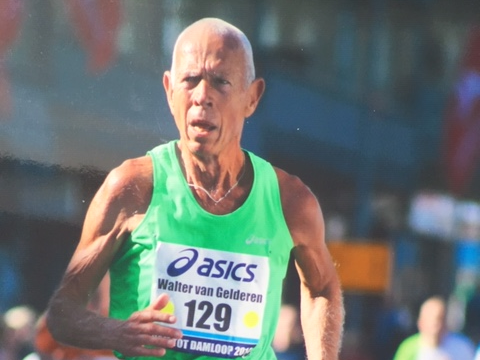 Running is my passion and really only came about when I left my work as a communication trainer early in 2000 as a 60-year-old and moved on as a freelancer/guest teacher.

Before that time, I jogged the same round twice a week. Because I had a lot more time available, I started training more intensively, joined avVN and applied for a masters race license.

The first major race in the category M60 was the Netherlands Championships (NK) 15 km on the road in Groningen. None of the nominated prizewinners knew me. I became the surprise winner in 1:01:25.

In all subsequent age categories M65, M70 and M75 I have regularly been on the podium. I have won the NK cross several times and ran 15 and 20 km NR’s at these distances. These have since been improved by other runners.

The first of the four marathons I ran, was as part of Runner’s World’s “Dreamteam”. Among the sponsored items was a Polar watch. Under the inspiring leadership of trainer Rob Veer I trained with a program for the Rotterdam Marathon in 2006.

The program was based on running in heart rate zones. It is not always easy to carry out the schedules faithfully. I almost fell while running very slow in zone 1 and I quickly soured up in zone 4/5. After that period, I didn’t do much more with heart rate zones. However, I do run at different paces.

A few years ago I did a test with the marathon schedule where you do not train more than 14 kilometers. I have (had) the schedule adjusted for the Dam to Dam loop in 2015. It was a tough schedule that made me feel like I was running four races a week.

In the race, I benefited. A competitor that is normally stronger, I was able to overtake in the last kilometers and finished in 1:16:42, first at the M70. I think when I passed my competitor I said something like “see you later!” He finished in 1:17:11.

I haven’t finished my running yet. My wish is to be able to add a few nice performances to my running CV in my new age category M80. Due to the Corona troubles, races have been cancelled. My hope is to be able to run one or two more track races and a half marathon in the coming months.

I never consider myself too old to learn and recently I have become very interested in “running on power”. “Power” doesn’t mean much to me. At the last sports medical test in 2018 I read back that I cycled 220 watts of maximal power during the exercise test. And I had a VO2 max of 42.2. I cannot interpret these figures and am satisfied with a conclusion such as: “No relevant deviations, health is excellent”.

In the foreword to the e-book “Running on Power” (Dutch title: Lopen op Vermogen; English edition in progress) Koen de Jong writes that it gives peace of mind in his workouts, other than running on heart rate. “The trainer is on your shoe,” he concludes.

I find it a challenge to work with “new laws and new technology ” in my old age!

That’s how we got into a conversation with Walter.

It’s a shame Walter did the exercise test on a bike. As a general sports test, of course, that’s fine, but it’s not specific enough for running. Walter is a trained runner and not a trained cyclist. That makes a difference.

A quick look in the table in “Running on Power” shows that with a VO2 max of 42 you should think of 2:02:51 in the half. That is not enough to beat Willem Landman’s 1:57:11 but does offer perspective because it is a bicycle VO2 max.

Last Thursday Walter did a test with a fast 5 km. It went at a pace of 5:09/km. If we enter that time (25:45) in the calculator on the website TheSecretofRunning.com a time of 02:00:11 appears for the half marathon. That’s not enough to beat Willem Landman either.

Walter has trained more on duration and less on speed over the past year. If we enter in the calculator under ‘Endurance‘ that long distance is Walter’s specialty, a better time results: 01:58:28. Still not enough for an NR, but with training there may be more in the tank.

Last week Walter started training with the Stryd running power meter. This already yielded a first Critical Power value: 210 watts, 3.28 watts/kg because Walter weighs 64 kg. That would be a great improvement on the NR half marathon M80.

It just doesn’t mean anything yet. Stryd must first get to know you – that means training more often and variedly – to determine a good personal critical power value and form a power duration curve. We have explained this earlier in two articles for runners who want to start training on power.

With the calculator you can also calculate what Walter and Willem could run at 28 years with a time of 1:57:11 at the age of 80. That would theoretically be 1:11:18. The corresponding performance index is national level.

We agreed with Walter that we’re going to follow him. As the first opportunity for a race, Walter is thinking of the 10,000 m during the NK Masters 2021 from 18 to 20 June 2021 in the Fanny Blankers Koen stadium in Hengelo. When writing this article, this has not yet been cancelled. If it can go ahead, registration opens within a few days. (PS it is postponed to September)

Of course, these reflections are not meant to put pressure on Walter. Running is fun and it should stay that way!

You can read all about running on power and the effect of all factors on your performance in our book ‘The Secret of Running’.