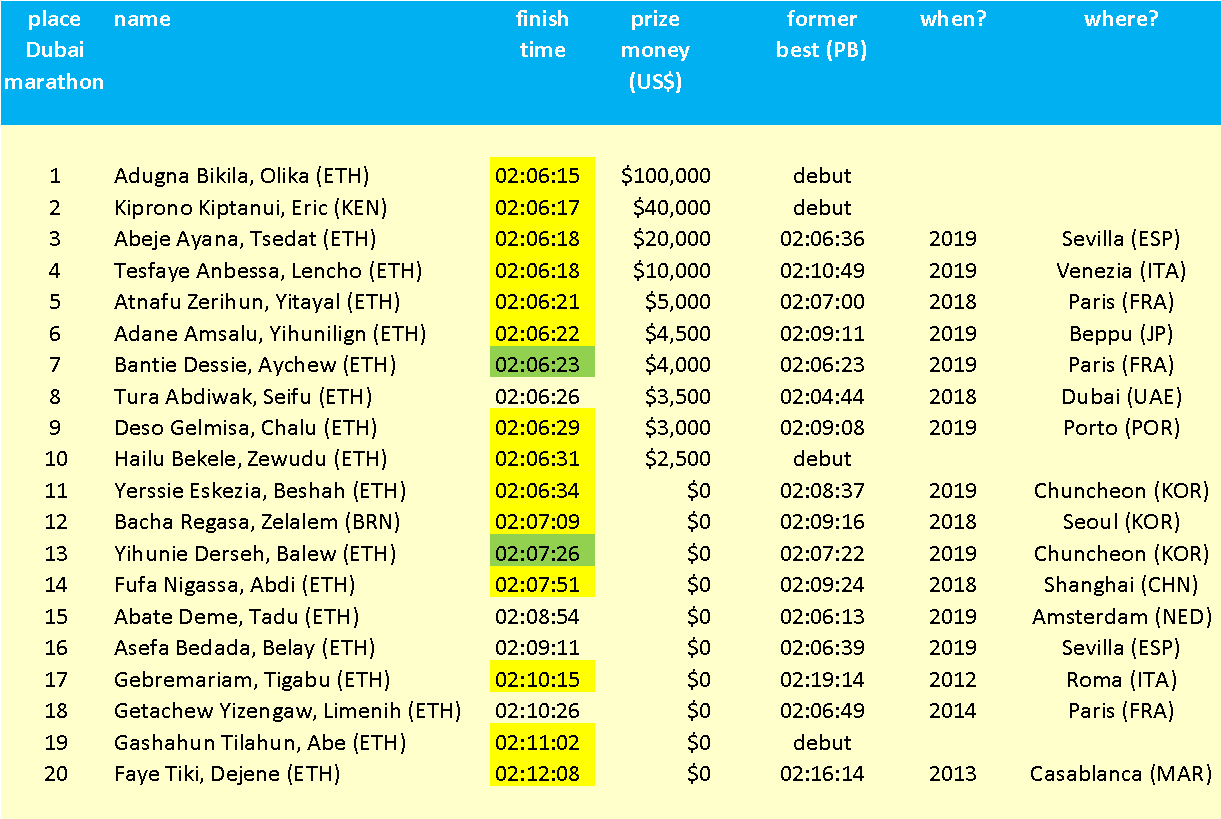 The winning time of 20-year-old Ethiopian Olika Adugna Bikila was not a record for the Standard Chartered Dubai Marathon. Usually the elite athletes run a lot faster than 2:06:15 here.

Still, Dubai is one of the fastest marathons in the world and 11 athletes ran faster than 2:07, which is a record for this race!

There were only 19 seconds between the first place finisher and the eleventh finisher. The marathon was decided in the final sprint of the top 11 finishers. 10 out of 11 ran or matched a personal best.

What spurred these great results?

On Friday morning, February 23, 2020, the starting shot for the elite athletes fired at 6 a.m. It was still dark. The sun rose an hour later.

The Dubai marathon course is flat. The athletes run back and forth on the coastal road. The north-north-western sea wind was almost at right angles (70°) on the course. Wind force 3 Bft (16 km/h), so the course a little headwind and a bit of tailwind.

The 73% humidity was good. The 20°C temperature and 1017 mbar air pressure of were less favorable for a top time.

Traditionally many Ethiopians participate in Dubai. Of the first twenty finishers, eighteen were from Ethiopia. Most of them are member of one of the professional Ethiopian athletic clubs who run all over the world for prize money. The NN Running Team of Jos Hermens was present with three athletes. Eric Kiptanui (Kenya, debut, 2nd in 2:06:17) and Aychew Bantie (Ethiopia, 7th in 2:06:23) performed well. The Ethiopian NN Running team athlete Solomon Deksisa lost the pack at the 35 kilometer point and finished in a disappointing 2:15:58.

The table shows the data of the first twenty finishers in the mens race. Fourteen of them are marked in yellow, These ran a PB or had their marathon debut. Two others equalled their PB and are indicated in green. It is striking that some PB’s that were beaten by minutes were set recently in 2018 or 2019.

We know that the first eleven ran with the fast Nike Vaporfly Next% shoes. This shoe is on the market from mid-2019. Presumably the previous PB was also set with this shoe or with the predecessor shoe, the Nike Vaporfly 4%.

At half marathon the leading group consisted of 24 athletes. They came through in 1:02:43. The average pace in the first half was 2:58/km as it was the second half. A steady pace is already a key to success, as the readers of our articles and our book The Secret of Running know.

The second success factor is that the runners well understood that cooperation in a pack lowers the air resistance, decreases the energy cost of running, resulting in faster finish times.

May be they just didn’t expect to be still together in the last few kilometers and that the 100,000 US Dollars would be for the fastest sprinter, a marathon debutant. The following table clearly shows that the pack came through at the same time at every 5-km point.

Two success factors: the shoes and the pack

From the data the advantages of the shoes and running in a pack can be recalculated. Keep in mind that the maximum power of the human motor complies with a functional threshold power (FTP) of 6.4 Watts/kg.

Running alone and on normal shoes, the top 11 in Dubai should have been running with 331 Watts for the 2:06:15 finishing time. This complies to a FTP of 6.20 Watts/kg.

In a pack and on normal shoes, this finishing time requires 327 Watts, a FTP of 6.13 Watts/kg.

In the pack and with the 2% shoe advantage 321 Watts are required for this finishing time, FTP 6.01 Watts/kg.

Calculating the other way, running alone on normal shoes the eleven athletes would have clocked  2:09:44 with 321 Watts under these circumstances.

The shoes and running in a pack together resulted in the winning time of 2:06:15.

The shoes are not cheap. The latest Nike Vaporfly Next% Ekiden, which was launched as a special edition due to the Olympic year, is priced around € 275 and can not be afforded by everyone.

Everyone can run in a pack. In the larger races you can join pacers who run at a flat pace to a predetermined finish time. Almost without exception, these pacers run with a large group. You can easily join them and sharpen your PB with one or more minutes.