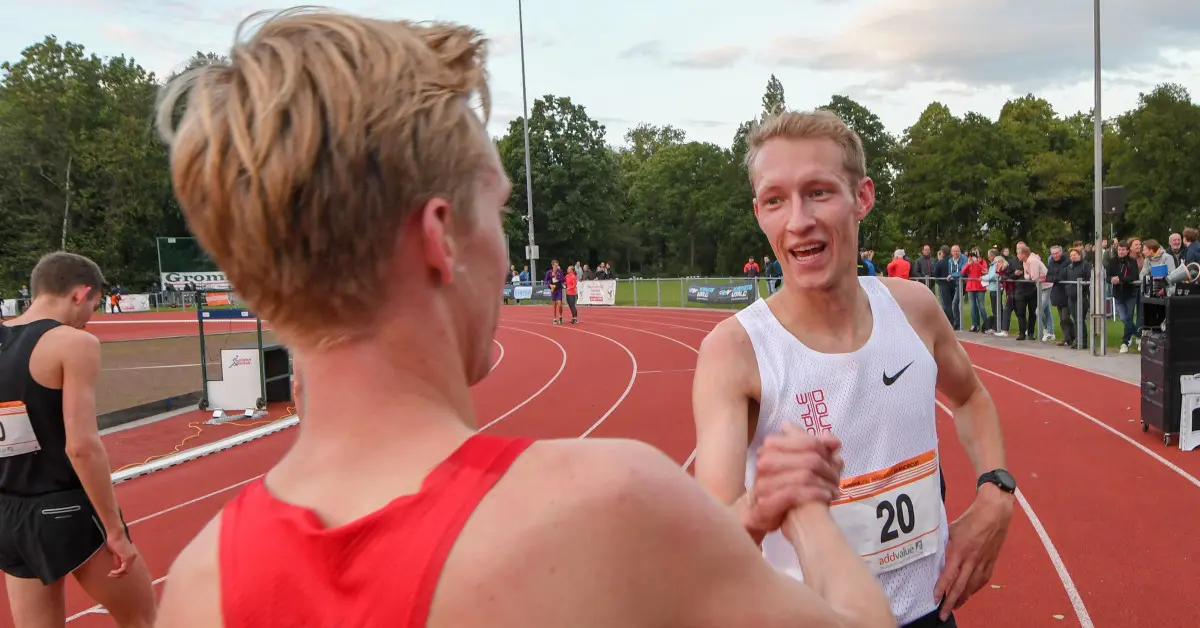 What an unprecedented luxury for the Dutch marathon runners! In recent weeks no less than 4 runners have met the 2:11:30 qualifying limit for the Olympic Games. At the elite edition of the Valencia marathon on 6 December 2020, Abdi Nageeye finished 15th in 2:07:09, Bart van Nunen 33rd in 2:10:16 and Frank Futselaar 41st in exactly 2:11:30. A week later Björn Koreman won the marathon of Vienna in 2:11:07. Hat off for these wonderful performances, which will of course have been partly due to the ‘spring acting shoes’ that have already led to many new records this year.

But what now? After all, only 3 Dutch men are allowed to participate in the Olympics. The Athletics Union is therefore faced with a difficult choice: which of the 4 will be allowed to go to Tokyo? We assume that Abdi Nageeye will be selected anyway, given his status, history and quick time. As 2nd Bart van Nunen is obvious, who was more than 1 minute faster than Frank Futselaar in Valencia. But who will be the 3rd Dutchman in Tokyo? That is of course up to the decision makers, who will take various factors into account in this difficult decision. After all, the circumstances in Valencia and Vienna were by definition not the same.

To help them, in this article we make a comparison between the performances of Frank Futselaar in Valencia and Björn Koreman in Vienna. We use our universal running model which makes it possible to make an objective comparison for the different conditions (shoes, track, weather, presence of pacers) in both races.

One of the most important performance determining factors is, of course, the recent development with the ‘spring acting shoes’. In previous articles we have already analyzed this in detail.

In another article we referred to the research results of Wouter Hoogkamer, in which it was shown that the Nike Vaporfly led to a 4% lower energy consumption among elite runners.

Based on photographic images we concluded that both Frank and Björn ran on the Nike Vaporfly. So fortunately we don’t have to correct for a difference in shoes…. In our running model we did lower the standard ECOR value (Energy Cost of Running) for both of them by 4%, because of these shoes.

In Vienna on 13 December 2020, the marathon took place on the super-fast course on which Eliud Kipchoge succeeded last year in his mission to run the marathon under 2 hours (1:59:40).

The start was on top of the Reichsbrücke across the Danube. From there it descended about 13 meters to the flat and straight section on the Hauptallee in the Prater Park. The Lusthaus and Praterstern traffic circles were always the turning point. This 4.3 kilometer long track was run nine times. 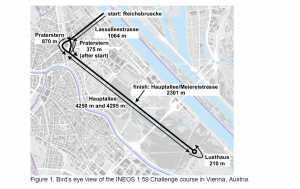 The difference in height per lap is no more than 3 meters. The bends of the turning points are very wide with a curve radius ranging from 23 to 350 meters. The scientific advisory committee that supervised the INEOS 1:59 Challenge of Eiud Kipchoge calculated that the height differences and the turns in total only meant a disadvantage of 5 seconds at the race time (compared to a completely straight and flat course).

The course in Valencia consists of 2 rounds through the center of Valencia and is also almost flat and very fast. Per lap the difference in altitude is only 14 meters, so the loss of time due to the differences in altitude is comparable to that in Vienna (order 5 seconds). However, there are about 20 turns in the course. In a previous article we already showed that the time loss due to turns is much smaller than often thought. We estimate that the course in Valencia is about 5 seconds slower than the course in Vienna.

That the course in Valencia is indeed very fast, was shown by the results on December 6. Not only did the Kenyan Kibiwott Kandie improve the half marathon world record (57:32), but also the numbers 2, 3 and 4 of the race remained below the old world record (58:01). A total of 61 athletes ran the Olympic qualifying limit and as many as 11 national records and 77 personal records were improved.

In Vienna the weather conditions were ideal, 2-3 degrees Celsius, the humidity was 93%, the air pressure 1008 mbar and it was virtually windless (3 km/h).

In Valencia it was slightly less cold 7-10 degrees Celsius, the humidity was 59%, the air pressure 1007 mbar but with a breeze of 22 km/h it was not windless.

So apart from the wind in Valencia, the weather conditions in Vienna and Valencia were similarly good. In Valencia, the runners experienced a tail wind and a head wind twice in two laps.

In our books ‘Hardlopen met Power!’ and ‘The Secret of Running‘ we have shown before that the ideal temperature for a marathon is 7 degrees Celsius (for top runners). At 3 degrees and 10 degrees the performance is virtually the same. So we can say that Frank and Björn had the same ideal running  conditions, apart from the wind. We will return to the influence of the wind later on in this article.

The presence of pacers

In our books and various articles we have shown that this is an important factor. Pacers provide a significant reduction in air resistance, allowing you to run faster. In this respect, Björn has had an important disadvantage compared to Frank. Frank ran in a very strong eilte field, which allowed him to take advantage of pacers and running in a group of competitors. Frank finished as 41st with several runners right in front of him.

Björn was in the lead alone in Vienna for a large part of the race. The marathon was this year organized as the Austrian Championship and had a much less strong field of elite runners. We estimate that Björn’s air resistance was thus considerably higher (air resistance coefficient cdA 0.22 instead of 0.20 m2). This will have cost him about 1 minute at his race time.

With our universal running model we analyzed both performances and calculated how much power Frank and Björn ran in their marathon.

Finally, we made another calculation for the influence of the wind in Valencia. We made an estimation of the combined effect of the wind shadow by buildings and groups, sidewind, headwind and tailwind. The result is that with windless weather Frank would have run 2:11:06.

The performance of Björn Koreman in Vienna should be valued slightly higher than that of Frank Futselaar in Valencia. He also had the disadvantage that he had to run alone for a large part of the race, which caused him to suffer more from air resistance. Had he been able to run in a group until the finish line, like Frank, he would in theory have been able to run 2:10:20. Frank had to deal with wind. If we compensate for this disadvantage, Frank’s time could have been 2:11:06.

Consequently, in theory, Björn would have been almost a minute (46 seconds) faster than Frank under the same conditions. According to our calculations, Björn is therefore entitled to the ticket to Tokyo!

Have the cards been shuffled yet? Certainly not yet. There will be spring marathons (we hope) with new opportunities to run the qualifying limit. Then other athletes than Björn, Frank and Bart can also give it a try. Only after May 31, 2021, the Athletics Union will decide which athletes will go to Tokyo. The running time plays a role in this decision, but is not the only thing that counts.

Finally, we note that the FTP of both Björn and Frank is a lot lower than that of the world record holders (who run around 6.4 Watts/kg). This is no wonder because Björn ran 12 minutes slower than Eliud Kipchoge in Vienna and Frank ran 8.5 minutes slower than the winner in Valencia. Unfortunately both runners will therefore not have much chance of winning a medal in Tokyo, unless they can improve spectacularly…… Is that bad? We like to quote Baron de Coubertin’s slogan that participating is more important than winning!