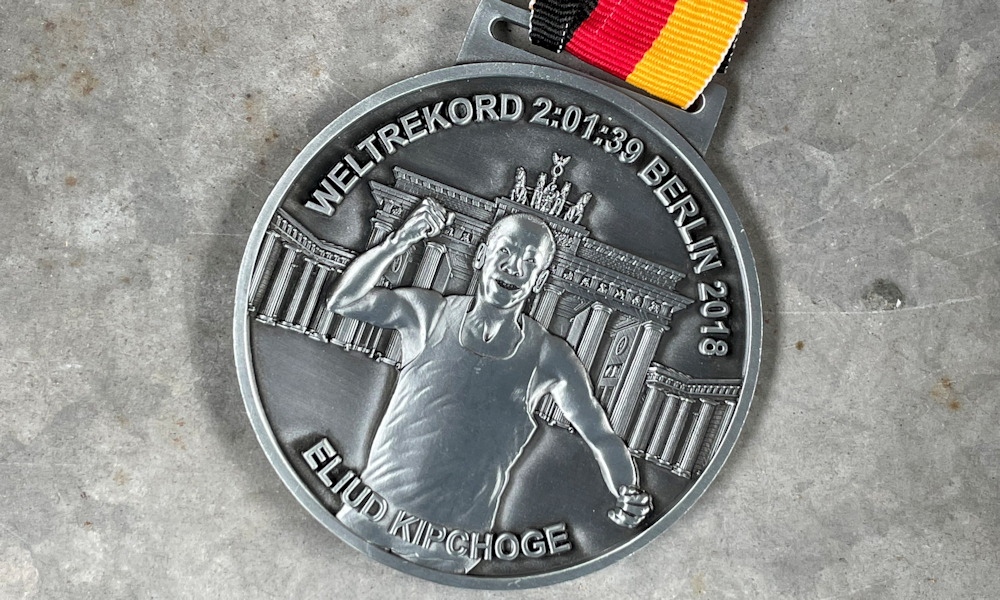 We are impressed with Stryd’s Race Calculator. Last week we published Ron’s experience at the Berlin Marathon. As we all know, it was hot in Berlin which caused many runners to run a lesser time, including Kenenisa Bekele (2:06:47 versus 2:01:41 in 2019, so 4% slower).

We noticed in the evaluation of Berlin that Stryd’s Race Power Calculator does not fully reflect the temperature effect for others than elite athletes, nor does it distinguish between light and heavy runners. Earlier, we also saw following the Tokyo Olympics that the Race Power Calculator for shorter distances than the marathon was not quite right either.

For this article, we have therefore listed all the information about the influence of temperature, distance and bodyweight on the performance loss in the heat, both for the readers of our columns and for the programmers of Stryd. We base this on our books (e.g. The Secret of Running) and other literature, as well as our own calculations.

What is the optimum temperature?

The influence of the temperature on the performance in running is determined in practice by at least 2 factors:

In practice, it appears that the optimal temperature (in windless and dry weather) for the world class runners is somewhere near 5-10°C. You have to keep in mind that they produce much more heat than recreational runners, so that for ordinary runners the optimum will be at 10-15°C. This is cool enough to not get any problems with warming up and warm enough not to need extra clothes.
Please note that wind and rain can lead to hypothermia and performance loss as well!

What effect does a high temperature have on our body?

When we run we almost always produce more heat than we consume. We use no more than 23-25% of the energy to run. The rest is released as heat. This causes our body temperature to rise and we start sweating, to get rid of the heat.

The increase in body temperature has the important consequence that the blood vessels in our skin dilate, so that more blood flows to the skin and less blood is available for other functions, including our (leg) muscles. So our cardiovascular capacity is actually getting lower; if we run with a
heart rate monitor, we notice this from the ‘cardiac drift’, that is, we run less fast with the same heart rate (HR) or get a higher HR at the same running speed.

The loss of sweat has the effect, among other things, that our blood volume decreases and the blood thickens, which further reduces the capacity of the heart and our performance capacity. Eventually, the pressure in the veins can drop so much that the filling of the ventricle is compromised, forcing the HR to go up even further. If the body temperature rises above 39.5°C, the symptoms of heat stroke may occur (fainting, extreme fatigue, reduced ability to sweat).

Temperature influence at the marathon

Various studies have been reported in the literature in which the statistical relationship between the temperature and the realized times in the marathon has been examined. The best study is that of Helou et al.

They analysed the results of more than 1.7 million participants in the Berlin, Boston, Chicago, London, New York and Paris marathons between 2001 and 2010. They found a statistically significant relationship between the realized times and the temperature, see the figure. They concluded that the performance loss among elite runners (P1) was less than among lesser runners (referred to as Q1, the fastest 25%, the median and Q3, the fastest 50-75%).

The results can be summarized as follows:

These results are well in line with the previous study by Ely et al that related the performance loss to the wet bulb temperature (which is always somewhat lower than the normal temperature), see the indicative table below: 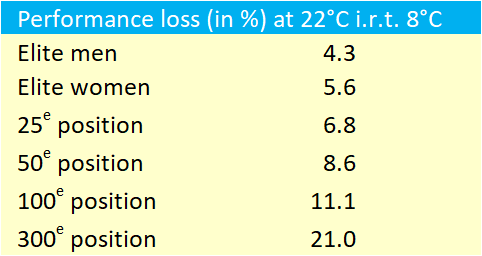 What is the influence of body weight?

Tim Noakes, the author of ‘The Lore of Running’, summed up the influence of the loss of sweat on performance with the slogan ‘all great marathoners are small’.

In The Secret of Running we have already shown that this is related to the fact that larger and heavier runners produce more heat and therefore have to produce more sweat to dissipate their heat. The most famous example of this is the Atlanta Olympic Marathon in 1996, which was run under tropical conditions at a temperature of 25°C and a relative humidity of 70%.
Many runners suffered from the heat and the race was eventually won by South African lightweight Josiah Thugwane (43 kg), ahead of South Korean lightweight Lee Bon Ju (45 kg). We calculated that these lightweight runners produced ‘only’ 3.3 liters of sweat, against 10 liters for a runner of 90 kg!

What is the optimum temperature at other distances?

It goes without saying that the influence of the temperature will be the biggest on the marathon distance. After all, at a shorter distance you will suffer less from warming. Also, it is known that sprinters in particular thrive best at higher temperatures. Their muscles must be sufficiently warmed up to be able to deliver maximum power for a short period of time. What the optimal temperature is at different distances has been investigated in another study (Will le Page, Optimum temperature for elite running performance). The results are given in the table and graph below. 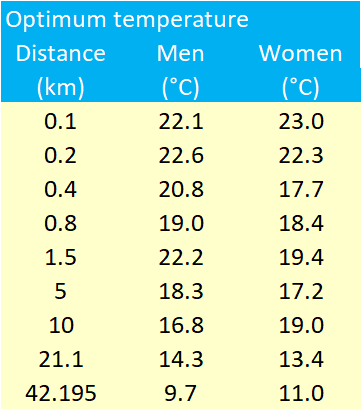 The relationship from this figure makes a lot of sense. At the short distance, your muscles benefit from warm weather and you do not suffer from warming up. On the long distance it is becoming increasingly important that you can lose the heat you produce to the air and therefore a lower temperature is better. If the temperature is too low, you can suffer from hypothermia. This plays a major role, especially in wind and rain.

How big is the influence of the temperature at different distances?

We have not been able to find a good paper with concrete results on the influence of temperature at distances other than the marathon. Nevertheless, after some puzzling, we managed to deduce a relationship ourselves for the loss of time at different distances compared to the loss in the marathon, see the figure below.

We have based this on the study of Helou et al. for the marathon and the following additional considerations:

With this article we trust to make a good contribution to a correct estimate of the effect of the temperature, weight and distance on the performance loss in the heat and the calculation of this in the Race Power Calculator of Stryd.