Dutch elite cyclist Tom Dumoulin surprised the running world on November 14, 2021 by participating in the 10K of the Groene Loper Run in Maastricht (The Netherlands) and immediately becoming second in the sharp time of 32:38.

In an ordinary cotton shirt and without carbon shoes, he seemed to run at ease with the leading group. The winner Wouter Simons, a fanatic runner and triathlete from Genk, Belgium, was deeply impressed: “he hardly breathed, what a class”. On social media it rained praise, including from Dutch champion Michel Butter!

Tom’s performance inspired us to make a comparison of the performance of runners and cyclists. The two sports are of course similar in the sense that the leg muscles have to do most of the work and the power of your human motor (especially your heart lung system and your leg muscles) is decisive.

For cyclists, running strengthens the bones. For runners, cycling has a low risk of injury and is beneficial for training the metabolism and heart lung system. It can be an alternative to recovery training. You often see that cyclists also run and runners also cycle. To get to the absolute top you have to specialize. We don’t know of any examples of athletes who excel in both sports.

In this article we will calculate the performance of top runners and top cyclists and analyze the running and cycling performance of Tom Dumoulin and some other cyclists.

How high is the power of the human engine of runners and cyclists?

In our books, we have shown that the power of the human motor is similar in both sports. In both sports, we have derived the limit of human performance from the world records and world best performances, such as the climb to the Alpe D’Huez.

The very best performance in both sports corresponds to a maximum power of 6.4 Watts/kg (as FTP, so the power that you can maintain for 1 hour). The table below gives an overview of the FTP values at the different performance levels. The table also shows the speed corresponding to the FTP values mentioned, both in cycling and in running. The calculated speed applies to the standard conditions, so an ideal flat asphalt course, no wind and for cycling a modern road bike. 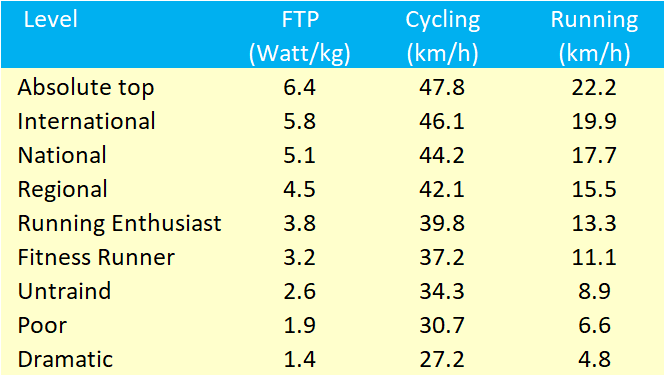 Top cyclists such as Tom Dumoulin regularly reach a level of 6 Watt/kg in the Grand Tours. The maximum value of 6.4 Watt/kg is only approached in exceptional cases (top form of the very best cyclists).

Tom Dumoulin wins the prologue of the Giro d’Italia 2015 in Apeldoorn (The Netherlands). We calculated his ADV at 6.05 Watt/kg (archive photo The Secret of Cycling)

How fast can top cyclists theoretically run with their power of 6 Watt/kg?

We calculated that with our standard model for running for a flat course without wind on a hard surface, the result is in the table below. 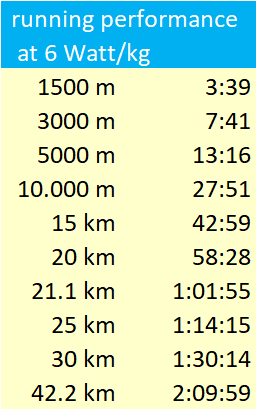 Based on our calculations, Tom should be able to run almost 5 minutes faster than the 32:38, no less than 27:51 according to the table! That seems like a fabulous time, but we have to remember that Tom is also a fabulous top cyclist.

If we calculate Tom’s actual time back with our model, the 32:38 corresponds to an FTP of 5.12 Watt/kg, so a lot (15%) lower than the 6 Watt/kg that he does achieve in the grand tours. What factors can explain this big difference? We see at least 3:

Other examples of running cyclists

Other appealing examples are professional cyclist Michael Woods, who once ran a time of 3:57.48 at the English Mile (1609 m). This performance corresponds to an FTP of 5.99 Watt/kg and is almost exactly the same as his bike FTP.

Tom Pidcock, the competitor of Mathieu van de Poel on the MTB, recently ran a 5K in 13:25 according to the internet! Although this time is not certified, it does correspond to an FTP of 5.93 and is also of the same order as his bike FTP. Incidentally, there are also reports that his course was downhill and too short due to GPS issues.

Most cyclists only run during the winter period and do not really focus on top times. It is known that Lance Armstrong ran the marathon after his cycling career in 2:46:43 (New York 2017) and Abraham Olano in 2:39:19 (San Sebastian 2006). These are of course nice performances, but absolutely not comparable to the world level they had as cyclists (FTP only 4.68!). This is even more true for Adam Yates who ran the Barcelona Marathon in 2:58 (FTP 4.38 Watt/kg) on 8 November 2021, this will have been a training for him and not a top performance. The same applies to Wout van Aert who recently ran the 10 EM of Antwerp in 1:11:11 (equivalent to an FTP of only 3.90 Watt/kg).

Author Hans also remembers the experiences of ex-pro Matthijs de Koning, who rode the Tour de France in the team of Joop Zoetemelk. After his cycling career, Matthijs started running with the Altis Masters in the 80’s, together with Hans, among others. Both ran half marathons of 1:12 at that time, which corresponds to an FTP of 5.16 Watt/kg. Matthijs cycled the big climbs in the Tour in ‘the grupetto’, so that his FTP will have been less than 5.5 Watt/kg. Matthijs was also a great ‘fighter’, who never gave up. He once performed a legendary catch-up race at the Dutch triathlon of Almere: he came out of the water as 100th, overtook 90 people when cycling and finished 2nd after the marathon!

In conclusion, it should be noted that in both sports, the real top performances are almost always delivered after years of intensive training, in which both the heart lung system and the leg muscles and the running or cycling economy is maximally developed.

Training with the magic predictor of your marathon time: Yasso 800s17 January 2022
Power-based interval training12 December 2021
A Stryd training plan improves your running performance. Not necessarily your Critical Power8 December 2021
How fast can you run and cycle?17 November 2021
Who will win the final sprint?29 October 2021