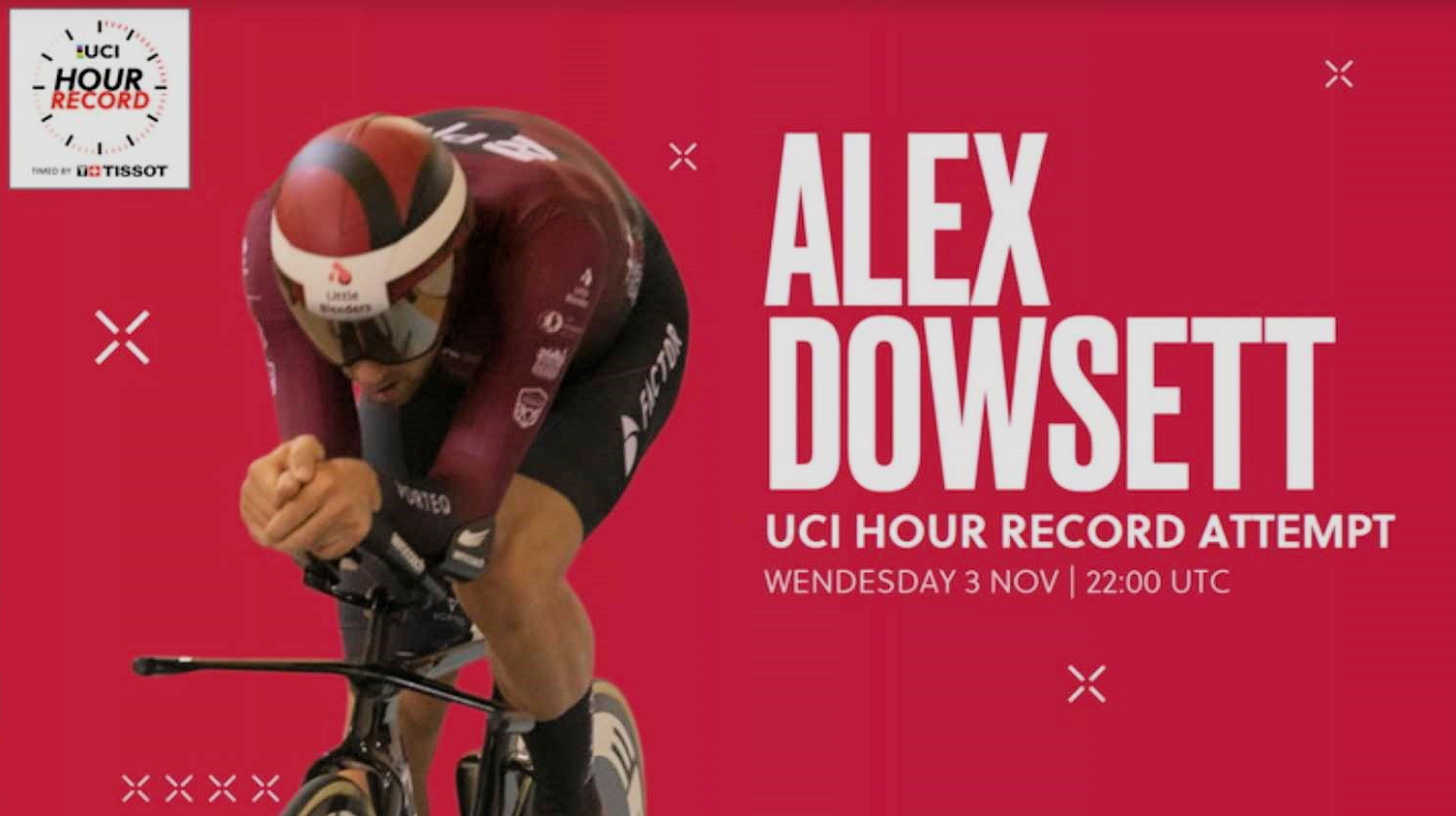 On November 3, 2021, cyclist/time trialist Alex Dowsett attempted to improve the world hour record for the second time on the highland track of Aguascalientes Velodrome in Mexico. In 2015 he captured the record with 52,937 meters. After that, the record was set even sharper, most recently by the Belgian Victor Campenaerts (55,089 meters).

Dowsett just failed to set the record again this time, but his distance of 54,555 meter was impressive. It inspired us to calculate how much power Alex had to pedal to reach this distance.

Traditionally, the world hour record has been one of the most appealing cycling performances. When Eddy Merckx set the record in Mexico City in 1972 at 49.431 km/h, it made a big impression worldwide. Because Eddy was and is widely considered the greatest cyclist of all time, it was expected that this record would last for many years.

But the aerodynamics were further improved over the years. Francesco Moser improved – also at altitude in Mexico City – in 1984 the record of Merckx. He used a special bike with improved aerodynamics  and closed wheels. The cdA was lowered even further in 1994 by Graeme Obree with his tuk position, with both arms folded under the body and the rider lying with his chest on the handlebars.

Dowsett has left nothing to chance. He went to the highland track (1888 meters above sea level) of Aguascalientes in Mexico, where the air resistance is about 25% lower than at sea level. He used a state-of-the-art bike with minimal rolling resistance (cr = 0.002) and optimal aerodynamics (cdA 0.20 m2).

He has extensively optimized his time trial posture, helmet and skinsuit with wind tunnel tests and he has been meticulously preparing for months. During his attempt he was able to maintain the schedule of the world record for 30 minutes. In the end he turned out to be just a bit short . Nevertheless, he is proud of the result, especially since he managed to raise 45,000 British pounds for charity, research into hemophilia, a disease that he himself also suffers from. With our universal sport model, we calculated that Dowsett pushed a power of 367 Watts during his attempt. His body weight is 75 kg, so this corresponds to 5.55 Watt/kg.

Calculating running and cycling with our models

Our universal model can be used to calculate performances, both in running and cycling, see the figure below.

How fast can you run with your power?

In our books and previous articles, we have explained how you can calculate how fast you can run at a certain power. In the table below you can see how many km you can run during 1 hour at a certain power. The value of 6.4 Watt/kg is the limit of human performance. The distance of 22.15 km corresponds well with the current world record in the half marathon (21.1 km in 57:32 by Kiwibot Kandie).

How fast can you ride up the Alpe d’Huez with your power?

In our books and previous articles we have already explained how fast you can cycle up the Alpe d’Huez at a certain power (finish Tour de France, length 14.45 km and height difference 1041 meters). In the table below you can see how long the climb takes at a certain power.

The value of 6.4 Watts/kg is also the limit of human performance. The time of 38:03 is slightly slower than the record of Marco Pantani (37:35), which is suspected because of EPO use. Author Hans himself climbed the Alpe virtually in 57:08 with a power of 4,0 Watt/kg, so slightly faster than the 58:22, but he benefitted from the lack of air resistance. 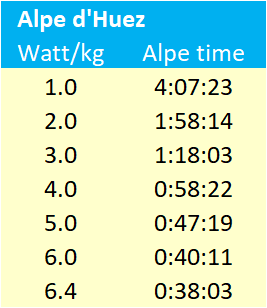 How fast can you go at a world hour record attempt in Mexico?

In our books and previous articles we have explained how hard you can cycle for 1 hour at a certain power. In this case, the following conditions are of great influence:

Because of the great influence of the air resistance, the body weight of the rider is also of great importance in the hour record. Uphill, lightweight climbers have the advantage, but at the hour record, heavier time trialists have the advantage. We have calculated for riders of 60, 70 and 80 kg, see thee figure below. On the horizontal axis is the power at sea level, so in Mexico you only have 88.3% of this available, and on the vertical axis the reachable distance in Mexico.

Dowsett himself weighs 75 kg and pedaled a power of 5.55 Watt/kg. This is therefore a lot less than the limit of 6.4 Watt/kg. We have seen this before with time trialists and classics riders with a somewhat higher body weight (70-80 kg) compared to the lightweight climbers and runners (56-60 kg).

Where lightweight riders and runners are able to (exceptionally) approach the limit of 6.4 Watt/kg, this is not the case for the heavier time trialists and classics riders. We have seen maximum values of ‘only’ 6 Watt/kg for these riders.

In theory, Filippo Ganna with his 82 kg should, according to our calculations, be able to set the hour record at 58.1 km/h if he were able to pedal 6 Watt/kg. According to reports, he has already maintained a pace of 57.5 km /h for half an hour in training. He currently seems to be the best candidate to (considerably) improve the current world hour record. Ganna thinks about making the attempt in 2022.

Training with the magic predictor of your marathon time: Yasso 800s17 January 2022
Power-based interval training12 December 2021
A Stryd training plan improves your running performance. Not necessarily your Critical Power8 December 2021
How fast can cyclists run?24 November 2021
Who will win the final sprint?29 October 2021