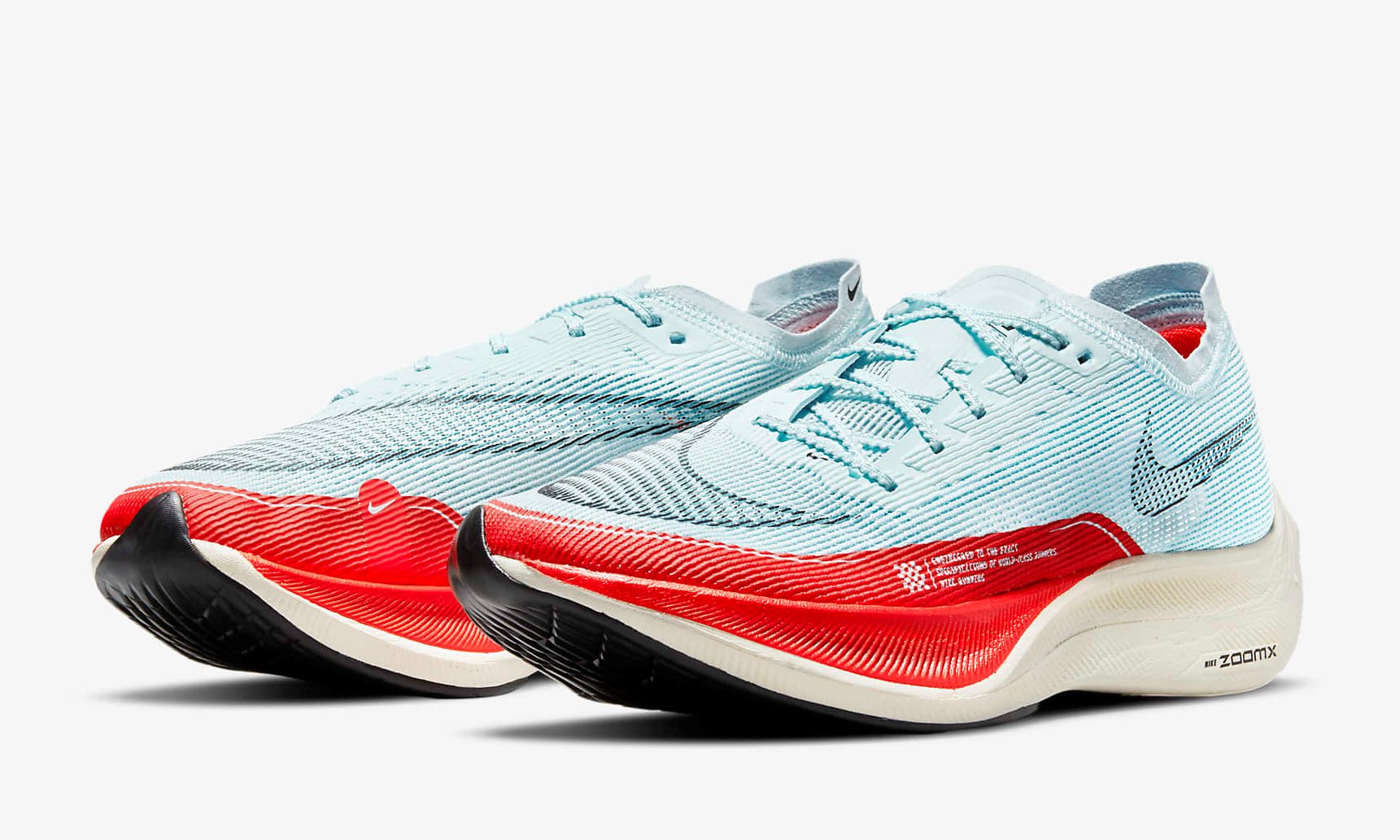 We recently received the following interesting question from one of our fans, namely Eddie :

“I am happy to read your articles.
Read some articles about the Stryd and the Nike Vaporfly.
The Vaporfly is about 4% more efficient than a regular shoe. I myself use the Asics Nimbus. My Critical Power is 324 Watts. I also have the Vaporfly and I want to use it for the first time for a fast 10 km. If I follow Stryd Race Calculator then I can run this 10 km with a Power of 322 and I’ll finish in 41:30. My question is: what is the impact of Vaporfly on your power? Do you run with the same power faster on the Vaporfly or can you run on a higher power? If it is the last, can you add 4% to your Critical Power?”

We have already informed Eddie that the Critical Power reflects the power of his human engine and therefore does NOT get higher if you wear faster shoes. So he has to run his fast 10K the power of 322 Watts. But because the energy consumption with the Vaporfly is up to 4% lower, at that power of 322 Watts he will run about 3-4% faster than 41:30!

Eddie’s question did encourage us to review the current knowledge and literature about the influence of running shoes on the race times. In this article, we will provide an overview of the energy consumption in running (the so-called ECOR, the Energy Cost of Running) and the factors that influence this, including the recent development of carbon-plate shoes, such as the Nike Vaporfly. A lower ECOR means that you use less energy and can run faster with the same power. At the end of the article, we will answer the question from the title.

How high is the energy consumption in running?

In chapter 12 of our book The Secret of Running, we have included the following table on the specific energy consumption when running on a hard surface (ECOR in kJ/kg/km). 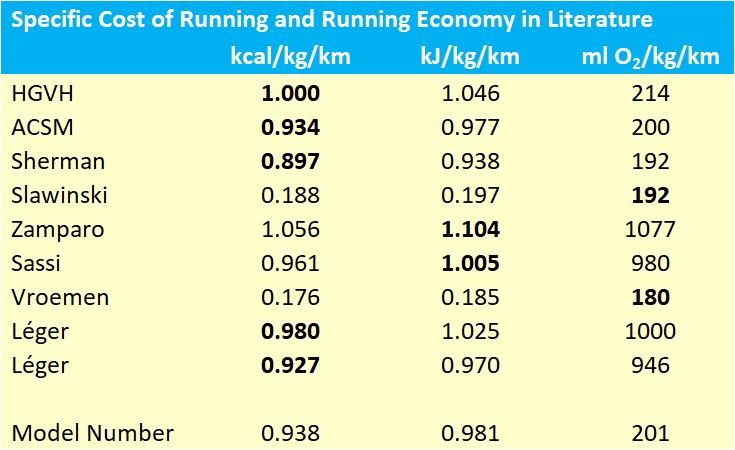 When we consider that various authors have used different methods and the circumstances have also been different, it is remarkable that all values are close to the average. We concluded in The Secret of Running that it is very realistic to use the calculation value of 0,981 kJ/kg/km. This value has now become the universal standard and is also used by Stryd and other authors.

Is the energy consumption the same for everyone?

The specific energy consumption is NOT the same for everyone and under all circumstances. For example, it is well known that some marathon runners, especially the Kenyans and Ethiopians, have a high running efficiency. The running efficiency covers many aspects, the influence of which are not explicitly known. These include:

With the introduction of Stryd, it has become possible to easily measure your individual energy consumption by dividing your specific power (Watt/kg) from a training or race by your speed (in m/s): the result of the division is your ECOR in kJ/kg/km. Please note that you must correct – even in windless weather – for the power needed to overcome the air resistance. This part is virtually negligible at low speeds, but with world class athletes it can be 7% or more.

How do your shoes affect your specific energy consumption?

It has traditionally been known that light shoes have an advantage: in The Secret of Running we have calculated that 100 grams of weight loss provides an advantage of 0.25-1.00 %. Most race shoes are therefore already very light nowadays, in the order of 200 grams.

It was also known from the literature that shoes that use an air-bag and thermoplastic polyurethane foam (such as the Adidas BOOST) can reduce the ECOR by order by 1% because the foam is viscoelastic and returns part of the landing energy.

The secret of these shoes is twofold:

Hoogkamer measured in the laboratory that the Vaporfly’s spring operation was able to return 7.46 Joule of energy per step compared to 3.38 J for the Nike Zoom Streak and 3.56 J for the Adidas BOOST2. If we divide the difference of 4 J/step for a world class athlete with a stride length of 1.5 m by 666 steps/km and a body weight of 60 kg, we come to a reduction of the ECOR of 0.04 kJ/kg/km. This exactly matches the 4% lower energy consumption that Nike claims!

By the way, the height of 40 mm also provides an advantage because the length of the lower leg increases slightly, as it were, which also has a positive effect on the running efficiency. Several studies have also shown that the stride length with the Vaporfly increases slightly(partly due to the spring action and the height) , which also has a positive effect.

What effect do the new shoes have on the running time?

The new shoes have clearly led to an avalanche of records. The most famous is of course the phenomenal race of Eliud Kipchoge with his 1:59:40 in the INEOS 1:59 Challenge at 12 oktober 2019 (run on Nike Alphafly shoes). The next day Bridget Koskei (also on Nike Alphafly) beat Paula Radcliffe’s 16-year-old world record to 2:14:04. The table below shows that since the introduction of the Carbon shoes almost all world records have been improved on these shoes (Sports Medicine (2021) 51:371–378).

In the tables below we have listed how many % the world records have improved since the introduction of the newly developed shoes for track and road. 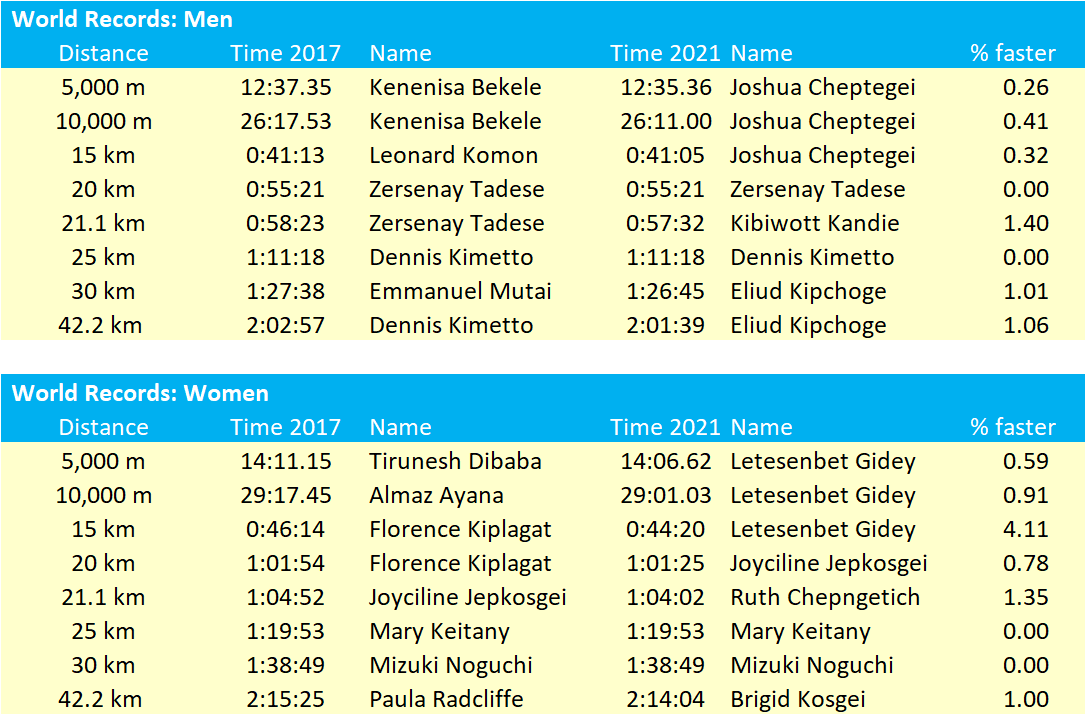 The percentage still seems modest (at least compared to the 4% lower energy consumption) but it should be borne in mind that the conditions will not have been ideal everywhere and the level of some old world records was very high (such as those of Kenenisa Bekele and Paula Radcliffe, who were clearly a class apart in their time). It is also illustrative of the latter that Bridget Koskei only improved Paula Radcliffe’s world record by 1%, but her own PR by more than 3%. It should be noted that a 4% lower ECOR value theoretically corresponds to a slightly lower time saving of 3.4% due to the influence of air resistance.

In the past year, 4 interesting studies have been published on the time gains from carbon shoes:

They have made an analysis of the best season times of the top 20 and the top 100 runners for the 10 km, half marathon and the entire marathon. They conclude that since the introduction of carbon shoes in 2017, the race times have clearly improved (0.6-1.5% in men and 1.7-2.3% in women).

They analyzed the results of 22 North American marathons from 2015 to 2019. The special thing about this study is that they used thousands of web photos and video recordings to determine which shoes the individual participants used. They concluded a benefit from carbon shoes of 1.4-2.8% for men and 0.6-2.2% for women.

This is by far the most comprehensive study. They looked at the results of 577,000 marathons and 496,000 half marathons in dozens of countries from April 2014 to December 2019. They investigated the effect of the shoes in 4 ways: with statistical models, by looking at groups of runners who ran the same race, by looking at runners who had changed shoes and by looking at the chance to run a PR in a certain type of shoes. Below are the results of the runners who switched shoes: an impressive advantage of the Vaporfly of even more than 4%! 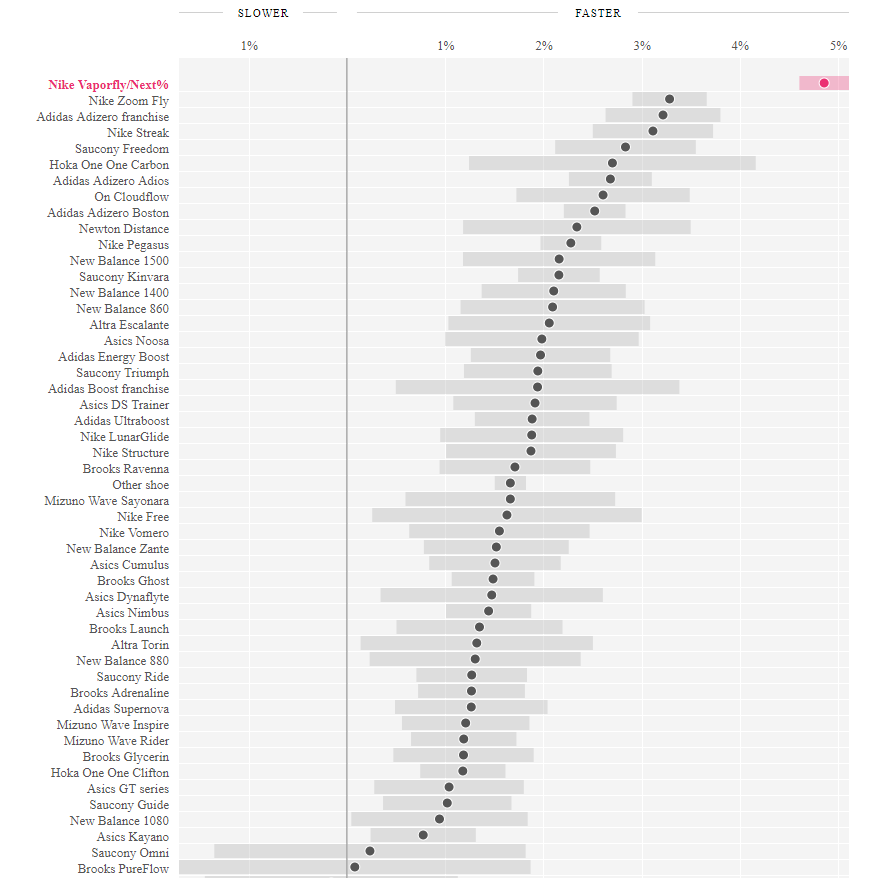 This is a very special case: a solo study by a passionate Danish researcher that we have written about before. Hechmann is fascinated by our book The Secret of Running and has used himself as a guinea pig. He used ten pairs of different shoes in different weight classes. He used a Stryd and an oxygen uptake device (Cosmed K5). On a treadmill he measured the specific energy consumption according to the Stryd (ECOR in kJ/kg/km) and the specific oxygen consumption (RE in ml O2/kg/km) measured by the Cosmed. The shoes have also been tested on the road. He found on the treadmill that depending on the shoe, the oxygen consumption differed when running with the same wattage. Hechmann found that with the Nike VaporFly (weight 200 grams) he was 8 to 10 seconds faster per kilometer than, for example, with the New Balance More (weight 300 grams). His stride length when using the Vaporfly turned out to be larger than normal.

In the following enumeration and image, Hechmann summarized his research results for the various shoes he tested (size US 91/2). 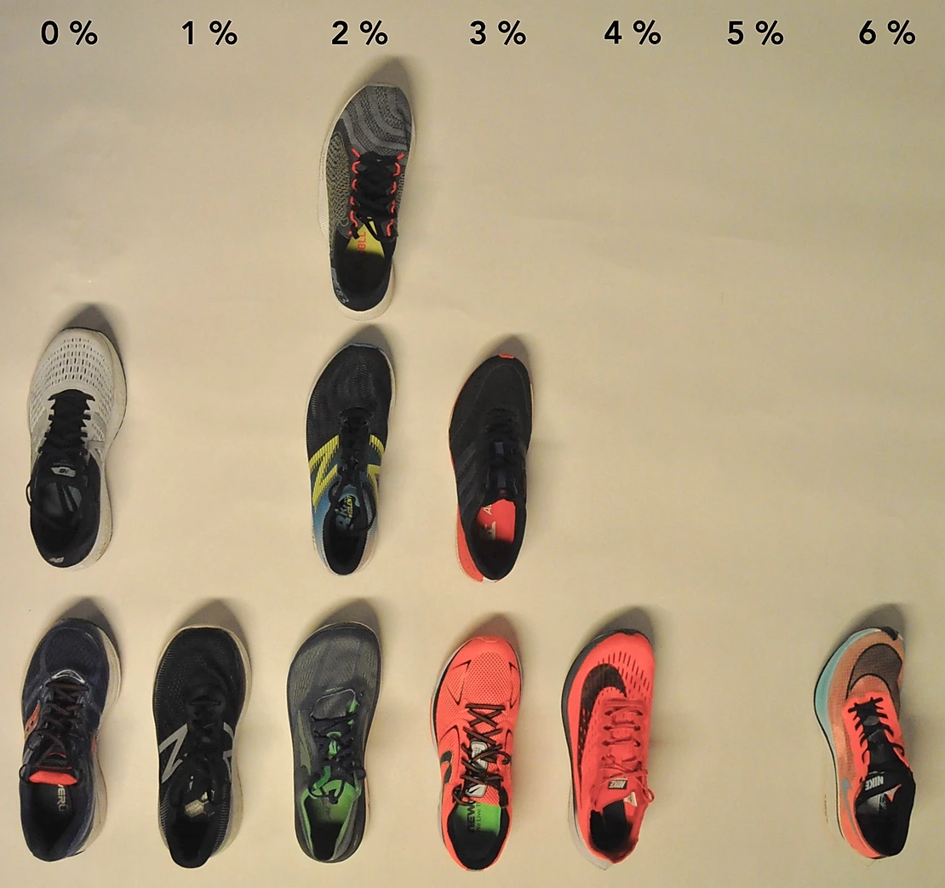 Eddie’s question gave us an idea for a practical method to determine the effect of shoes, namely by comparing the running time in a race with the time of the Stryd Race Predictor (which bases its prediction on the power of your human engine during training on training shoes). The lower energy consumption of the race shoes should be reflected in a faster time.

Of course, circumstances also play a role, but with sufficient data, such as in the Stryd Power Center, this can still lead to good results. We will propose to Stryd to develop such an option.