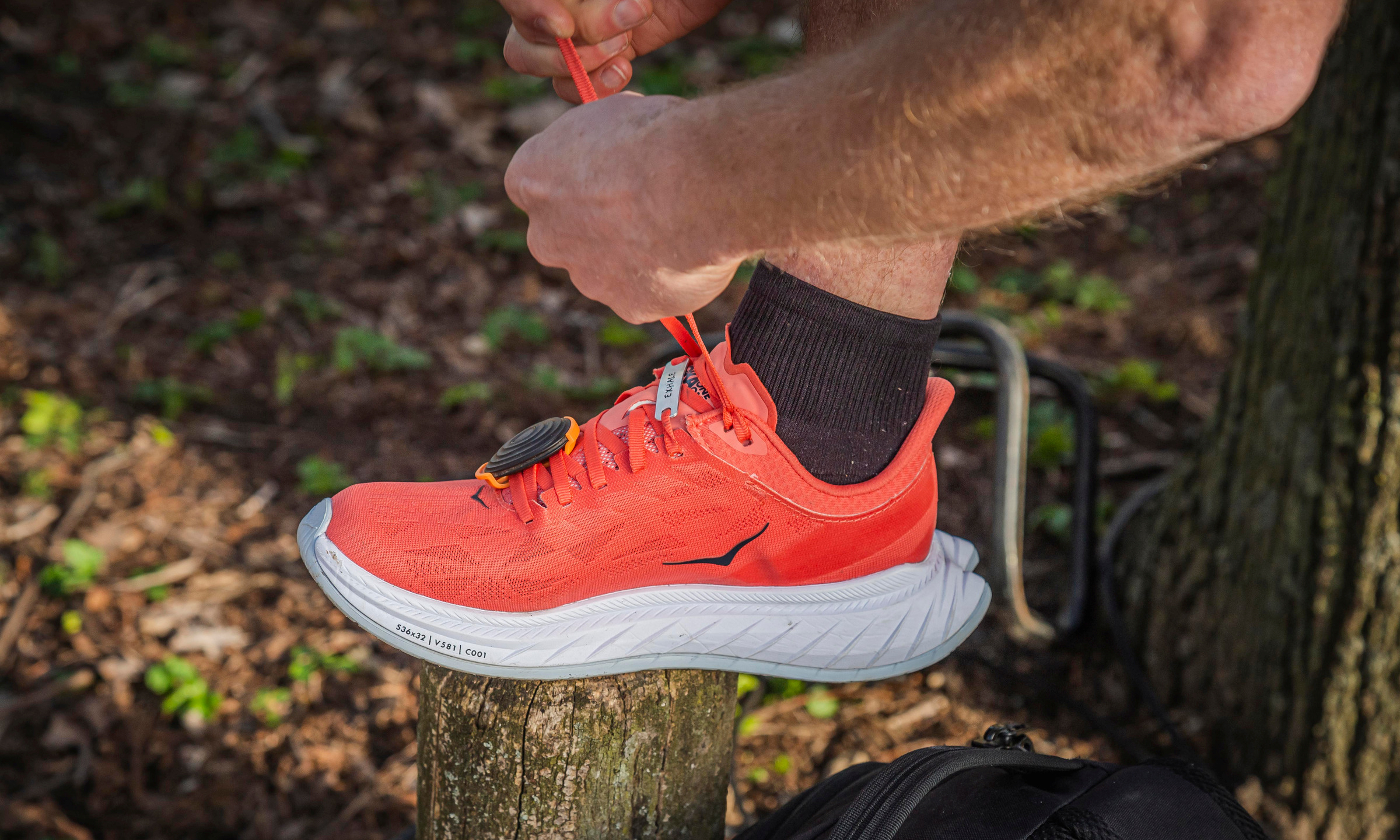 Koen ran with a Stryd on the laces of his Hoka One One Carbon X2 shoes.

The readers of our books and our articles undoubtedly know our running model, which states that your performance is determined by the sum of the running resistance Pr,the air resistance Pa and the climbing resistance Pc.

This model incorporates all factors that affect your running time, such as your body weight, your shoes, your running style, the temperature, the air pressure, your air resistance (which is less if you run in a group), the wind, the altitude above sea level and the slope.

For all of these the factors, we can very accurately determine the influence on your running time, but so far we have been the least successful with the influence of the wind. The problem here is that the wind is so variable, in time and place.

As a runner you have probably experienced that sometimes you almost stand still due to a gust of wind and in other places and moments the wind presents no problems. The wind data you see on Strava comes from meteo stations and says little because they represent the average of a longer period (10 minutes or 1 hour), while your time loss is mainly determined by strong wind gusts that last a short time only. In addition, meteo stations measure the wind at a height of 10 meters and the wind speed at your chest height is a lot lower (in the order of 50%). Furthermore, along the course you may have the benefit of wind shadow in a group and through trees and buildings or you have to deal with wind gusts along streets and tall buildings.

In short, it has been impossible until now to accurately determine the wind speed that is facing the runner. In addition, that wind speed varies greatly in time and place. Calculating the influence of the wind always remained the weak point in our modelling work. But we have found a solution for that by using Stryd’s Air Power data in a smart way.

In an earlier article we have already explained the measurement principle of the ‘wind port’of Stryd, which determines the Air Power. Stryd measures wind resistance in real time via a ‘wind port’. This provides an accurate picture along the course of the wind speed and therefore the time loss We illustrated this breakthrough technology earlier for the case of the Egmond half marathon.

In this article we will show how we accurately calculated how much time loss the wind caused during the recent marathon of Den Bosch.

A big PB for Koen de Jong
We cannot imagine that anyone missed Koen de Jong’s articles about the Den Bosch marathon. Koen sharpened his previous PB(2:59:02) by more than 8 minutes! Koen was euphoric. The same evening he had already written an enthusiastic article for Sportrusten. At ProRun, Koen had the audacity to announce beforehand that he would go for 2:49:41 based on Hans and Ron’s calculator. Despite the strong winds he managed to finish in 2:50:47.

Marathon of Den Bosch
The Bossche marathon was organized for invitees only. With the start in Sint Michielsgestel it went counterclockwise in 3 laps of 14 km with a turning point around the Bossche broek and back again. In the open area, the wind had free rein. With 10 participants there was also no opportunity to hide in a group. Only encouraged by a group of friends everyone ran his own race.

But not alone. Koen de Jong had trained with his Stryd running power meter. He only had to pay attention to one number: 250 Watts.

Mark Zuurhout also ran with a Stryd. Mark’s target wattage was 230 Watts. We also evaluate Mark’s performance in this article. His time of 3:08:25 also meant a PB for him. He averaged 230.1 Watts! Mark told us that this is even a faster time than the Stryd race calculator predicted (3:10:59) and more than 2 minutes slower than our calculator (without the influence of the wind).

For the evaluation you have to know that Koen de Jong ran with the fast Hoka One One Carbon X2 shoes and Mark Zuurhout with Hoka One One Clifton Edge racing shoes.

Wind
It was cloudy on Sunday, March 28, 2021. The temperature was good for a marathon at 8°C, but the wind force 4 (25 km/h) from the southwest provided a fresh 4°C feeling temperature. The unscathed course was not unfavourable to this wind direction.

The starting shot fell at 9:34 a.m. Koen finished just before 12:30 and Mark shortly after 12:45. In the windchart below of the nearby weather station Gilze Rijen it can be seen that they had to deal with wind force 4 and strong wind gusts (wind force 7) throughout the race.

Run with constant power
The readers of our articles and of our book ‘The Secret of Running‘ know that you run your fastest time at a constant power. The wattage is the one you can maintain at that distance. For Koen that is 250 watts and for Mark 230 watts. So you only have to pay attention to this value on your running watch.

When the wind picks up, the wind resistance increases and you have less wattage available for your running resistance. This means that you will slow down correspondingly. If the wind falls away or you have a tail wind, you automatically run faster. The course was flat, but the same applies to uphill and downhill courses.

In the following image we enlarge the wind resistance and speed for the first round. The second and third rounds produce a similar picture.

In this case, we’ll show Mark’s records. Mark ran the marathon on average at a pace of 4:28/km (13.4 km/h). He managed to keep his wattage nicely constant. You can clearly see that during the tougher and longer wind gusts the wind resistance increased considerably to order of 30 Watt or more.

Because Mark kept his power constant at 230 Watts, his speed dropped to 200/230*13.4 = 11.7 km/h. So practice follows theory: if the wind resistance increases, your speed decreases proportionally and you lose time.

We have elaborated this in detail in the table below. For all parts of the course in which a serious wind disadvantage occurred (wind resistance higher than 10 Watts over a longer period of time) we determined the length of the trajectory and the average wind resistance. We then calculated the time loss of all these trajectories based on the lower residual power (total power-wind resistance). Keep in mind that headwinds mean a much greater disadvantage than the advantage of tail winds and that crosswinds also cause a disadvantage. 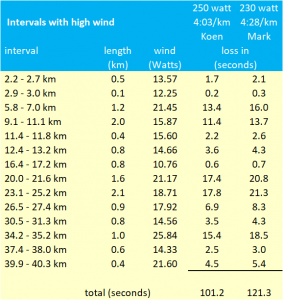 Why Koen’s loss of time due to the wind was less than Mark’s can be explained by the difference in power with which they ran (250 watts and 230 watts respectively). The wind was the same for both and therefore relatively more for Mark than the stronger Koen.

Now take another look at the predicted times at the beginning of this article? For Koen it said that he ran 1:06 slower than the prediction of the Race Calculator. According to our calculations, it was a little more 1:41.

We are very satisfied with this new method to get a grip on the loss of time due to the wind. We think this is a big step forward because with the Stryd it is now possible to accurately determine the wind resistance in real time and on the spot of the runner himself. The calculated time losses of 1:41 and 2:01 with a wind force 4 seem very real to us and a lot more accurate than we could have determined with global wind data from a meteo station.

You can read about the impact of all factors on your running performance in our book The Secret of Running.