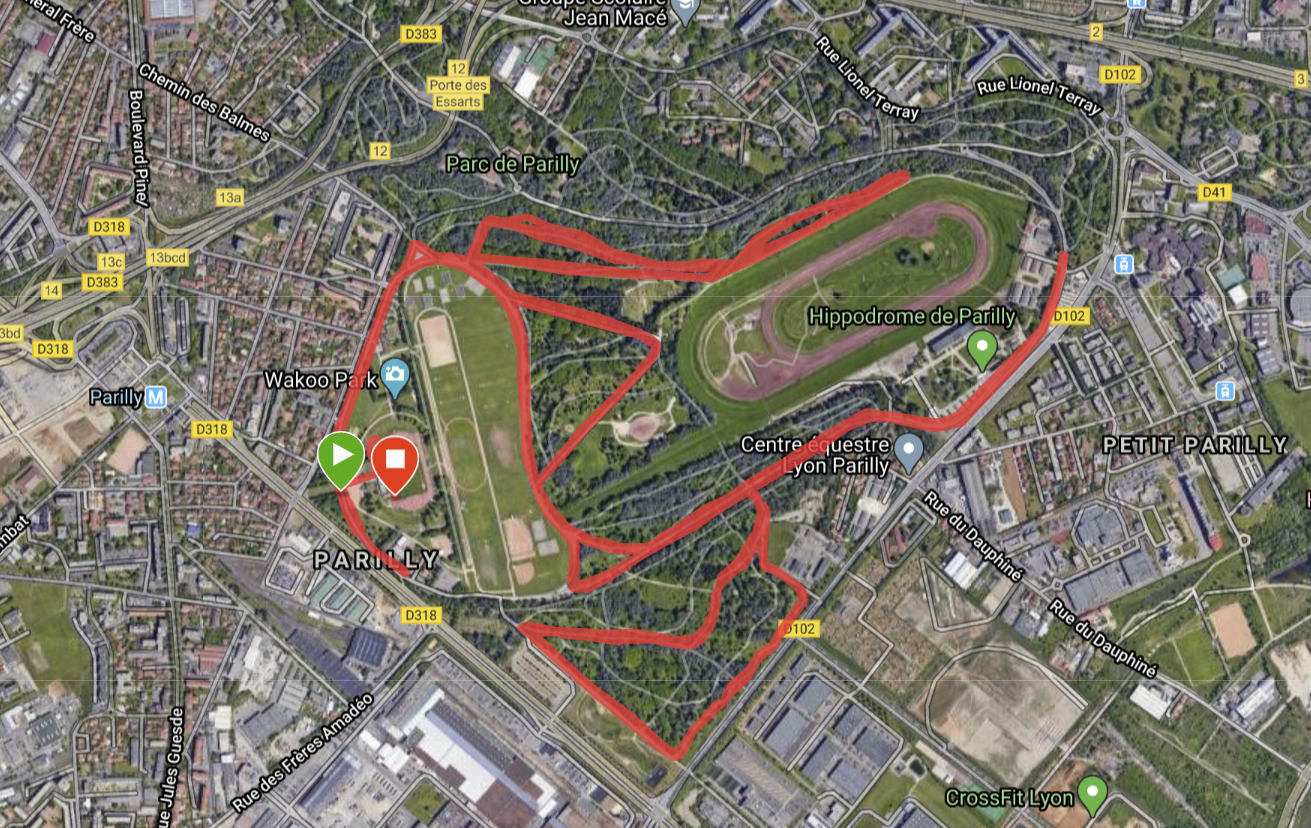 In previous articles we have already discussed the spectacular developments in recent years in the quest of running the marathon sub 2 hours. As you will know, Eliud Kipchoge finally succeeded with his phenomenal 1:59:40 in Vienna, a fantastic performance that is rightly viewed by all marathon runners with the greatest awe.

In the search for the marathon sub 2 hours, sponsors and scientists have made every effort to maximize the chances. A very important success factor in Vienna was undoubtedly the reduction of the air resistance by the team of 41 pacers, who drafted Eliud in a sophisticated manner. They used an aerodynamically optimized V-formation. In various articles we have previously explained the importance of the air resistance on the performance in running.

In this article we will elaborate on a final often mentioned factor, namely the loss of time due to curves and turns. Berlin is also praised for the long straight roads, so that the influence of the curves would be minimal. But how big is the time loss due to curves and turns and what differences can it cause in practice?

Theory time losses due to curves and turns

Many readers will be aware of our running model, which we have described in our book ‘The Secret of Running’ and in our papers. The figure below shows the basic concept of the model, namely that the power of the human engine P must be equal to the sum of the powers required to surmount the running resistance Pr, the air resistance Pa and the climbing resistance Pc. 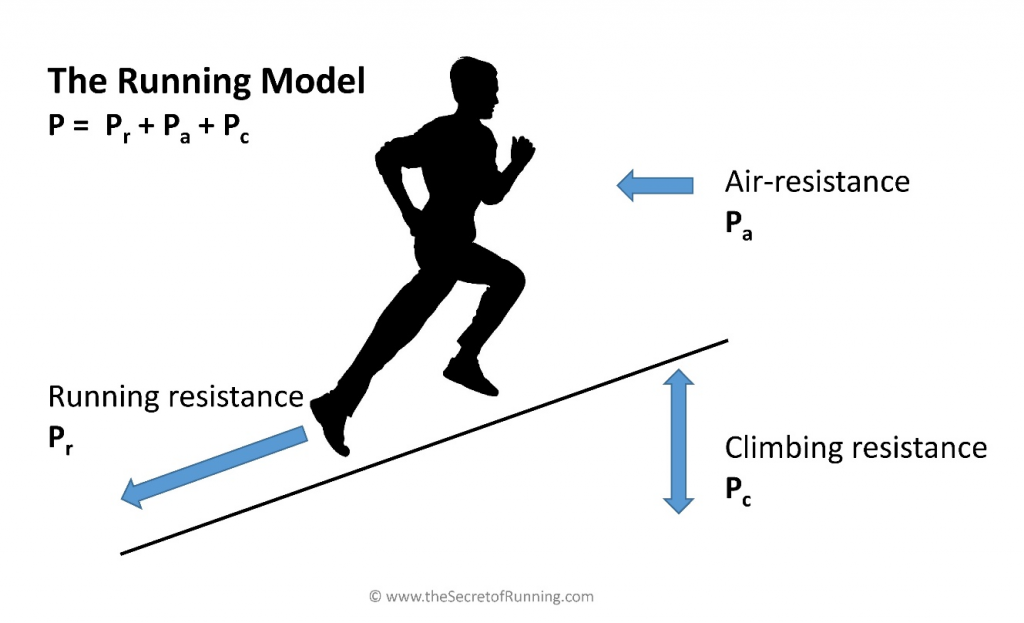 As you train more and better, the power of your human engine P will increase so you will have more power available to overcome the 3 resistances, allowing you to run faster. As everyone will understand, your running power P depends on the duration of the effort and therefore the distance: at a longer distance you have to slow down somewhat so apparently your running power is lower.

In our book “The Secret of Running” we have discussed the theory of the running model. The full model is shown in the box below.

In the model and in the above equation, the influence of curve losses is missing. We have neglected this so far. It is nevertheless possible to add this to the model. In curves we experience a centripetal force Fcp, which depends on the body weight m, the curve radius r and the speed v:

This centripetal force provides an extra resistance and we must therefore use part of our running power to overcome this extra resistance. Consequently, in curves less of our power P is available for the “normal” resistances. The result is that we slow down in curves. How much we can estimate by comparing Fcp with the gravity force Fg:

Next, we add the two forces (vector wise) and propose that the velocity decreases directly in proportion to the increase in force, in accordance with our running model. The figure below shows the result for curve radii of 5 m (the minimum according to the IAAF), 17.5 m (oval indoor track), 36.8 m (oval outdoor track) and 100 m and for 2 velocities, namely 5.86 m/s (2 hour Marathon) and 2.93 m/s (4 hour Marathon). 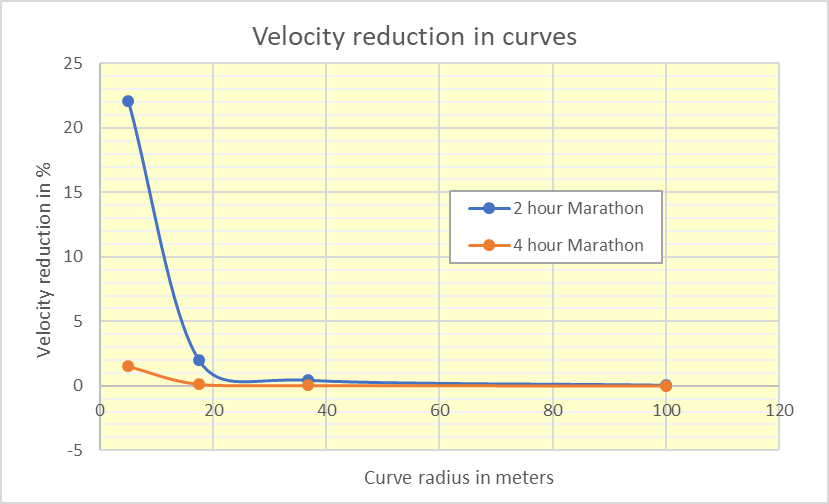 We see that the velocity reduction is limited and less than 1% at a curve radius of 37.8 m (corresponding to an oval outside track) or more.

Finally, we can calculate the time loss Δt of a 180° turn with the formula:

where v is the velocity on the straight and vb is the (lower) velocity in the bend.

The resulting time loss is shown in the figure below. 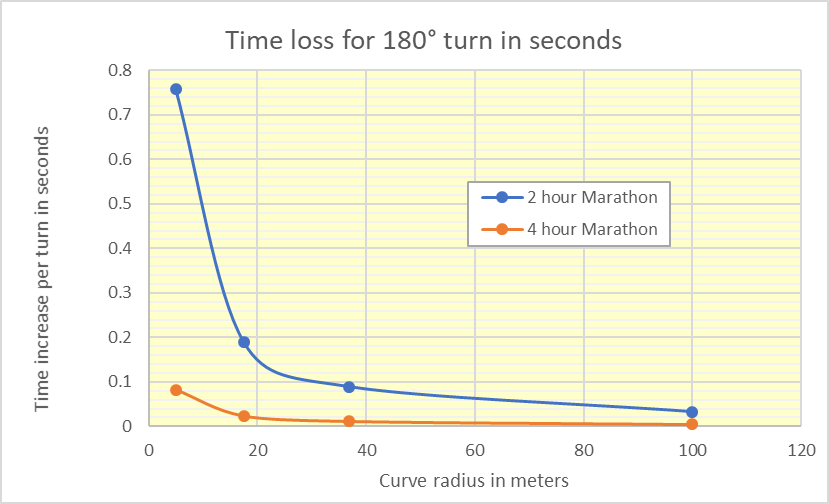 We see that the time loss of a 180° turn is very small. Even for Eliud Kipchoge, the time loss is less than 0.1 second for turns with a 37.8 m curve radius, corresponding to an oval outdoor track. For slower runners, the loss is even smaller.

Literature and data from practice

Recently 2 papers on this topic were published by scientists involved in the INEOS 1:59 Challenge in Vienna (Modeling the effect of curves on distance running performance, P. Taboga and R. Kram, and The effect of course design (elevation undulations and curves) on marathon running performance: an a priori case study of the INEOS 1:59 Challenge in Vienna, C. Triska, W. Hoogkamer, K. Snyder, P. Taboga, C. Arellano and R. Kram,).

In the first paper, the authors use a similar approach on the centripetal forces as above. However, they do not calculate the velocity decrease due to the centripetal forces based on our power model. Based on literature, they assume that the metabolic energy use is related to the leg force Fb by a factor of 0.6234*Fb +0.3766. Their results are comparable to ours, albeit that their time loss in the 1800 turn is slightly smaller (a maximum of 0.26 seconds for tight curves).

They also present an analysis of the Breaking 2 record attempt in Monza. They calculate that Eliud Kipchoge ran 71 curves with a total time loss of 1.52 seconds. This number is so low because the curves in Monza are wide, with curve radii between 23 m and 350 m. They also report that the marathon racecourse in Berlin has around 50 bends and the racecourse in London 70.

The second paper provides a detailed analysis of the INEOS 1:59 racecourse in Vienna. There the lap only contained 2 wide curves (2 roundabouts with a curve radius of 23-135 m and 50-251 m respectively), and a total of 4 laps had to be run. They calculate that the total time loss in the 9 curves was limited to 0.49 seconds! They also calculate the time gain due to the fact that the first part of the course fell 13 meters (gain 6 seconds) and the time loss due to the elevation difference of 3 meters that Eliud had to overcome each round (loss 10.1 seconds).

The most important conclusion is that the time loss due to curves in the practice of the big city marathons is much smaller than is often perceived. Even at the speeds of world best runners, it is only a matter of seconds in total, while the loss among recreational runners is completely negligible. It should be noted that this does not include the possible running of too many meters. Certainly in the hustle and bustle of recreational runners, this can easily lead to an additional half a km and therefore a loss of a few minutes!

With tight indoor tracks, the time loss is not entirely negligible. According to a calculation, the world record of 2:01:39 is equivalent to a time of 2:02:00 on an oval indoor track, so a 21 second difference due to the tight curves.