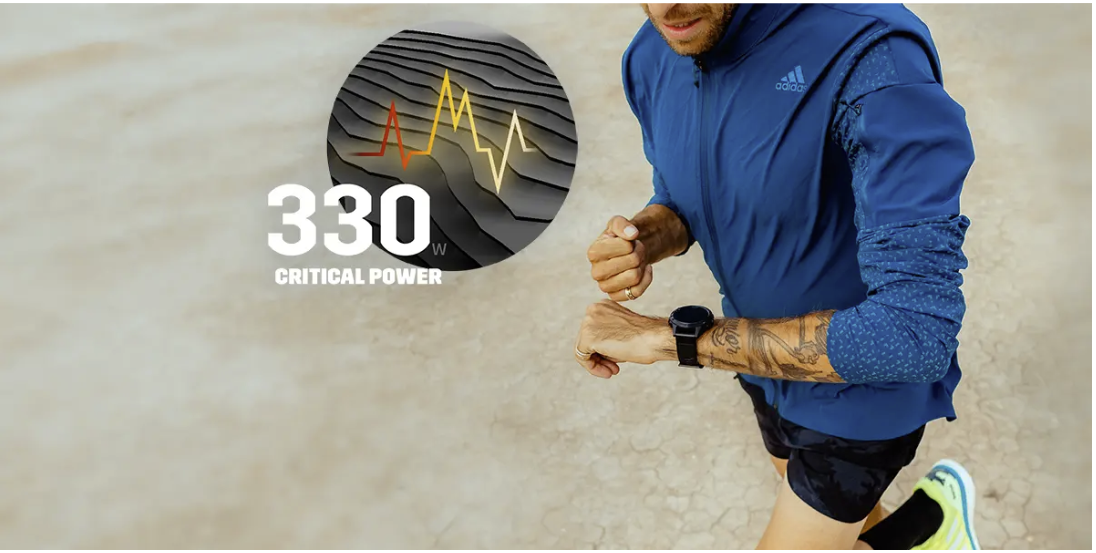 This paper is a direct result of a question from one of our readers, namely JanWillem Nieboer. He is an enthusiastic user of the Stryd and asked us how he could calculate his race time from the Target Power as defined by Stryd?

We studied this in detail and derived a very nice and simple formula that answers JanWillem’s question. With this new formula, everyone can calculate his or her race time very easily. The formula gives the race time in ideal conditions, so a fast track without differences in altitude and without any wind. If you also want to know how much slower you run in non-ideal conditions (such as hills, wind or forest trails), things become a bit more complicated and you will have to use our calculator or our spreadsheet with the complete running model.

Below we first give some background information and then we present our new and simple formula and a handy table of race times with different values ​​of your (specific) power. If you want to dive into the details, you should read on, because in the second part of this article we explain how we have derived the formula.

How much power do you have?

Many readers will be aware of our running model, which we have described in our book ‘The Secret of Running’ and in our papers. The figure below shows the basic concept of the model, namely that the power of the human engine P must be equal to the sum of the powers required to surmount the running resistance Pr, the air resistance Pa and the climbing resistance Pc. 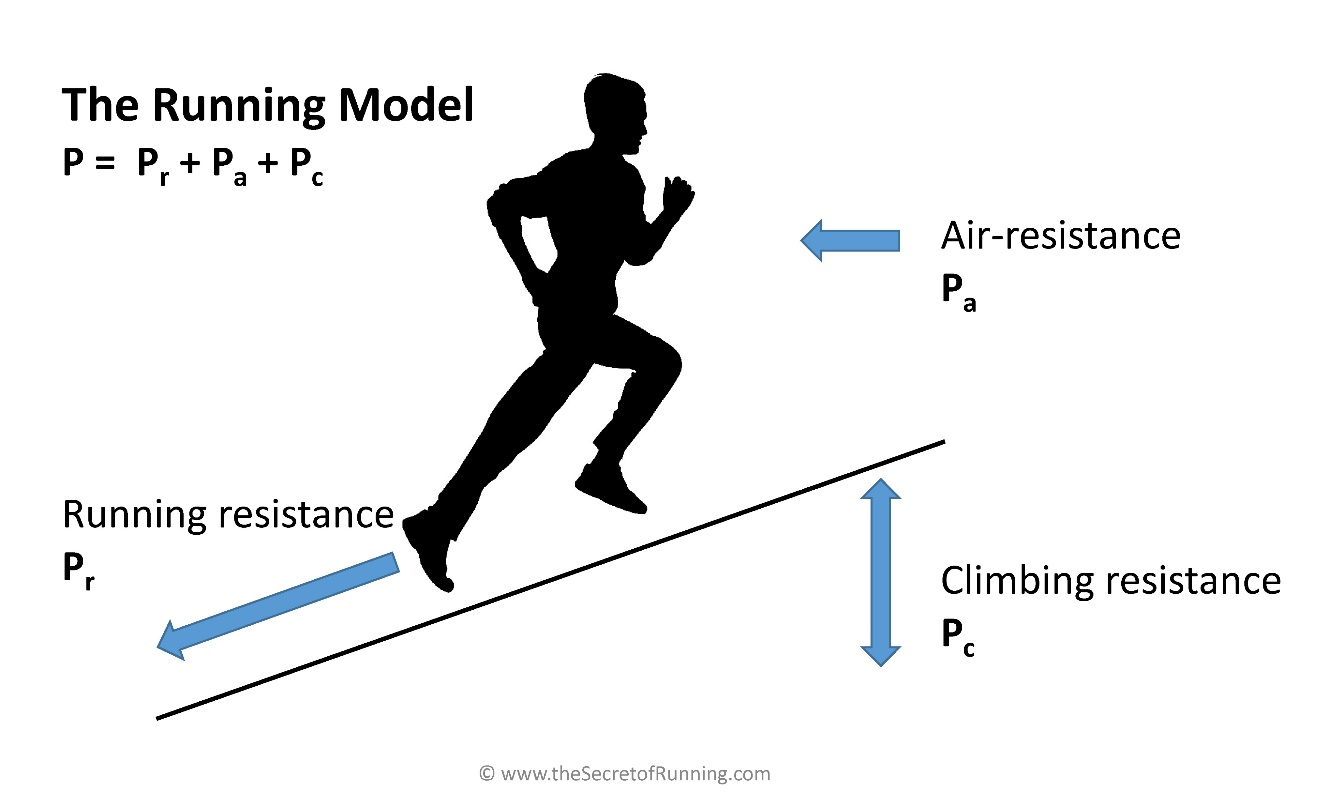 As you train more and better, the power of your human engine P will increase so you will have more power available to overcome the 3 resistances, allowing you to run faster. As everyone will understand, your running power P depends on the duration of the effort and therefore the distance: at a longer distance you have to slow down somewhat so apparently your running power is lower.

One of the advantages of the Stryd is that your running power is recorded for all your training sessions and races. The Stryd algorithm calculates your “Critical Power” (CP) based on this. For balanced mid and long-distance runners, Stryd’s CP is generally nearly the same as your Functional Treshold Power (FTP). This is the capacity that you can hold for 60 minutes. In the Stryd app you can then see what ‘Target Power’ (TP) you should maintain during races of different distances. Author Hans, for example, has a CP of 256 Watts, the Stryd App tells him that during a Half Marathon race he should maintain a TP of 243 Watts.

So our big question now becomes: what will be the HM-race time for Hans at 243 Watts?

Our new formula is super simple: to calculate your time T (in seconds) you should just enter your TP (in Watts), your body weight m (in kg) and the distance d (in meters)!

This time matches very well with the actual performances of Hans on the half marathon, although it should be noted that Hans has been injured for a while now and therefore has trained less, so his CP has decreased somewhat.

Based on the new formula, we have compiled the table below that gives a good picture of the achievable times as a function of the specific power (TP/m in Watt/kg). So from now on you can very easily calculate or read off your achievable time from the table when you know with which specific power (TP/m) you will run the race! That is of course very useful if you have used the Stryd in training, because then the Stryd app determines your TP for you. You know your weight of course, so it’s a piece of cake!

The results of the table correspond very well with practice. In deriving the formula, we have of course neglected some aspects (in particular the individual running economy and the individual air resistance), which means that deviations of 1 or 2% can occur in individual cases. We will discuss exactly how that works in the second part of this article. The formula also applies, as stated before, only for ideal conditions, so a fast course without altitude differences and in windless weather. If you want to know what the impact I of non-ideal conditions, you should use our calculator or spreadsheet with the complete running model. In the table we have finally indicated the extreme values ​​for the specific power in red: as we discussed in our book ‘The Secret of Running’, these values ​​fall outside the limit of the (current) human physiological limits. 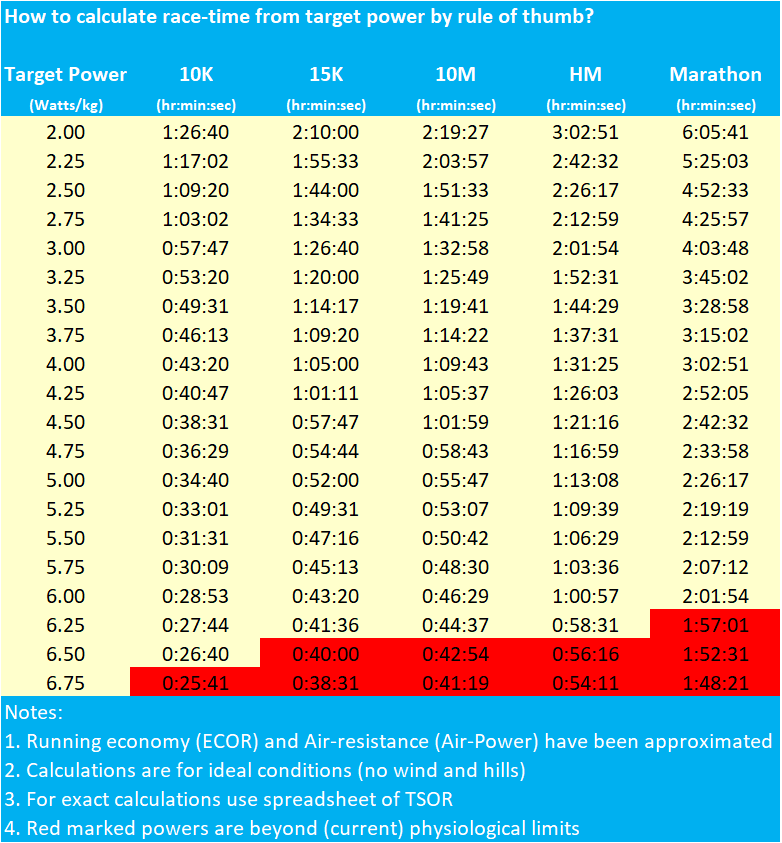 In our book ‘The Secret of Running’ we have discussed the theory of our running model. The full model is shown in the box below.

The full model is rather complex: it comprises a third-degree equation with many parameters that are needed to describe the influence of the different aspects. We have programmed an Excel spreadsheet with solves this third-degree equation and can be used to calculate the exact impact pf all parameters. Interested readers can request this Excel from us, but many runners will prefer the new and simple formula that we present in this paper.

The simple formula is based on some assumptions. First that there are no hills in the course (i = 0), so the third part of the equation becomes zero and therefore disappears. Second that there is no wind (vw = 0), making the second part of the comparison a lot easier.

What remains with these simplifications is the comparison: P = ECOR*m*v+0.5*ρ*cdA*v3.

We then divide the left and right parts of the equation by the body weight m, so we get:

The specific power P/m is the most important parameter that determines the quality of the runners. World best runners have a specific power of more than 6 Watts/kg, while recreational runners may have a value around 3 Watts/kg. This difference in specific power is the most important reason why world best runners run so fast. You can easily see that by neglecting the air-resistance, the equation then simplifies to P/m = ECOR*v, so the speed is directly proportional to P/m. Next it should be remarked that world best runners usually run more economically than recreational runners, so their ECOR (Energy Cost Of Running in kJ/kg/km) is also lower.

The relationship between the specific power, ECOR and running speed is (globally and simplified) shown in the table below:

We then looked at the second part of the equation, the air-resistance or AirPower. It now appears that this has more or less the opposite effect: world best runners run faster (so v is higher) and therefore face a much higher air-resistance or Air Power than recreational users (due to their ‘own’ wind).

The relationship between the running speed of the different runners and the air-resistance or AirPower (in Watt/kg, we have used a body weight of 60 kg) and the Air Power/v (in kJ/kg/ km) is shown in the table below .

So we clearly see the aforementioned effect: world best runners have to deal with much more air- resistance/AirPower (from their ‘own’ wind) than recreational runners.

Next, we simplify the running formula once more to P/m = (ECOR+AirPower/v)*v.

The AirPower/v factor indicates the specific energy consumption of the AirPower (similarly to ECOR in kJ/kg/km).

In the table below we give the end result, which shows that the sum of ECOR and AirPower/v has more or less a fixed value of 1.04-1.05 for most runners.