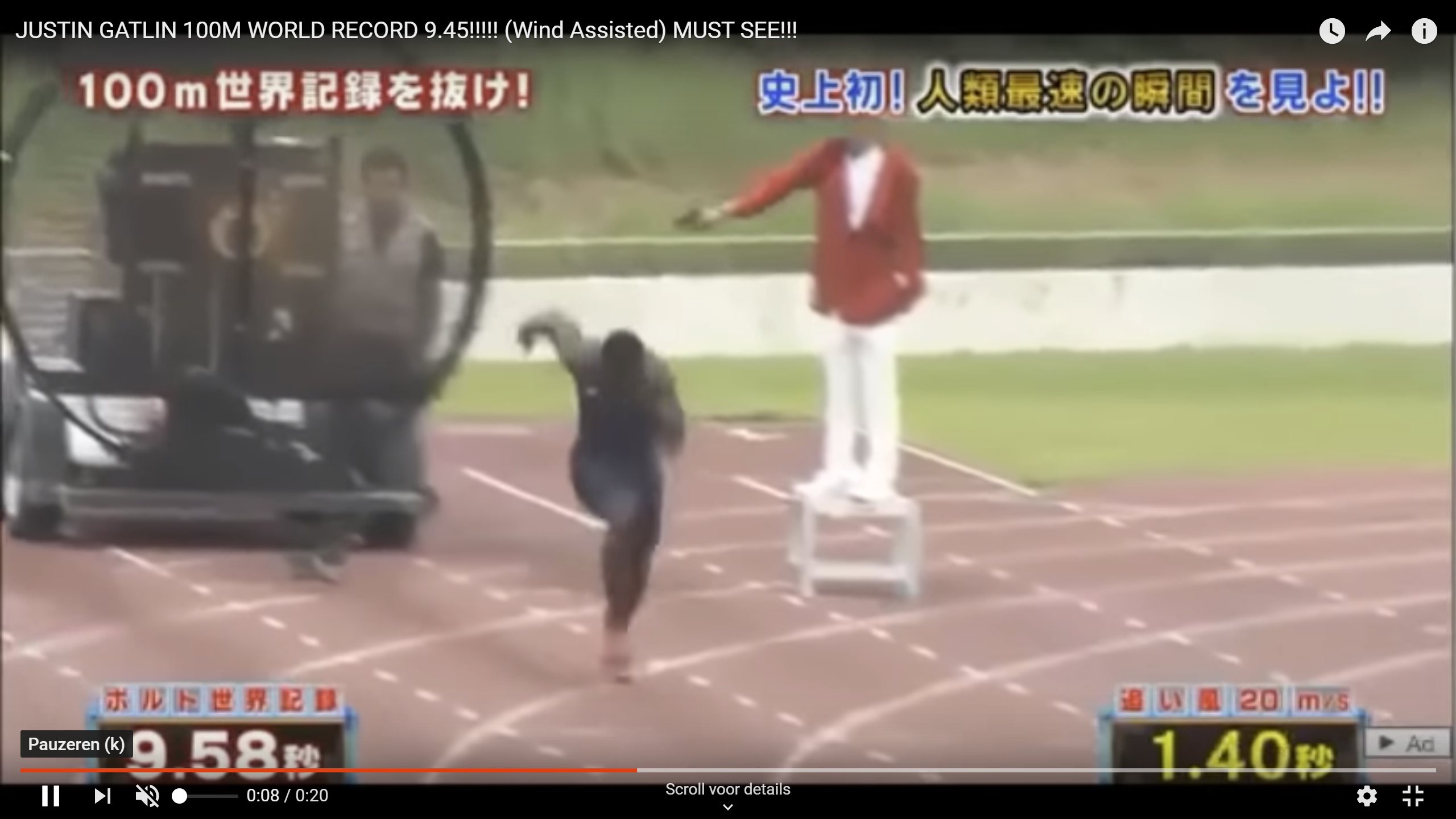 In our books and papers, we frequently discuss the worldwide quest of runners, coaches and running scientists for options to optimize the running performance through reducing the air-resistance. Cyclists and speed-skaters have been doing this for a long time already by developing optimal aerodynamic conditions (clothing, frames, body position, streamlining, drafting).

Previously, we discussed the development of the Stryd v3, which measures the Air-Power in real time and the sensational INEOS 1:59 Challenge. In Vienna, Eliud Kipchoge was helped by 41 pacers (5 teams of 7 pacers and 6 reserves) to achieve his magnificent 1:59:40.

This paper will focus on an earlier (and spectacular) demonstration of the impact of the air-resistance. Back in 2011 American sprinter Justin Gatlin ran the 100 meters in a sensational time of 9.45. He managed to do this during a special race organized by the Japanese TV-show Kasupe! They had arranged that he was assisted by a tail wind provided by huge fans (capable of blowing wind at 32 km/h)!

Consequently, Gatlin ran faster than the present-day world record of Usain Bolt (9.58), although he had never run faster than 9.95 seconds in regular races in the 2011 season. Apparently, the tail wind gave him a nett advantage of no less than 0.5 seconds!

In this paper, we will calculate how high advantage in the air-resistance has been to see whether we can explain the result. 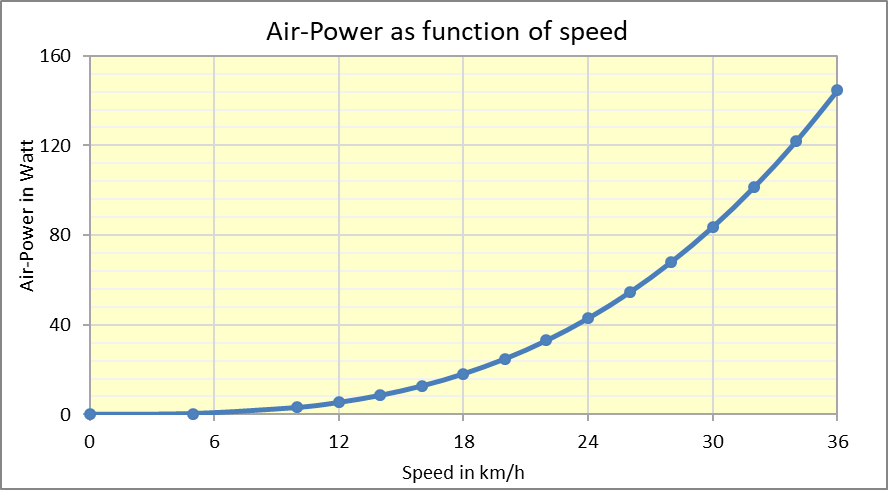 How big was the advantage of the tail wind?

This question cannot be easily answered as we do not know exactly how high the wind speed was. YouTube tells us that the speed in the fans was 32 km/h, but a large part of this wind will have been lost to the ambient air. It seems obvious that the real tail wind that Gatlin experienced will have been much lower.

In the case with tail wind, his speed was higher (10.58 m/s). Consequently, his Pr was 819 Watt which is 41 Watts higher than in the case without wind. So, we conclude that the air-resistance must have been 41 Watt lower as a result of the tail wind.

Next, we have used the formulae above to calculate at which wind speed the air-resistance would be reduced by 41 Watts. This results in a tail wind speed of 5.8 km/h or only 18% of the speed of the fans. The results are summarized in the table below.

We note that this is a simplified calculation as we have neglected the power required for the acceleration in the first part of the race. Actually, sprinters use a significant part of their power for this acceleration, as we have shown in our book ‘The Secret of Running’. As Gatlin obtained a higher speed with the tail wind, this means that he also will have used somewhat more power for the acceleration. When we taken this into account, the real tail wind speed will be higher than the above calculated 18%.

How fast could Justin Gatlin have run without any air-resistance?

This can be easily calculated as in this case Pa is equal to 0 (zero). This situation could occur when running on a treadmill or in a long wind tunnel with an air speed of slightly more than 10 m/s. In such cases Gatlin could use his total running power of 925 Watts for the running resistance Pr.

The result thus becomes a speed of 925/79/0.98 = 11.95 m/s or a 100 meters time of 8.4 seconds! This calculation is also simplified as we did not take into account the power required for the acceleration in the first part of the race.

In our book ‘The Secret of Running’ we have calculated a similar time for Usain Bolt. On the one hand his Pt is larger than that of Gatlin and he was thus faster in normal races. On the other hand Bolt was heavier, so the air-resistance was relatively smaller in his case. The formulae shows that the air-resistance is independent of the body weight, which means heavy runners have a small advantage.

Author Hans (who is a lightweight of 58 kg) has experienced this in cases of a strong head wind, when he was dropped from a pack of runners of similar quality.