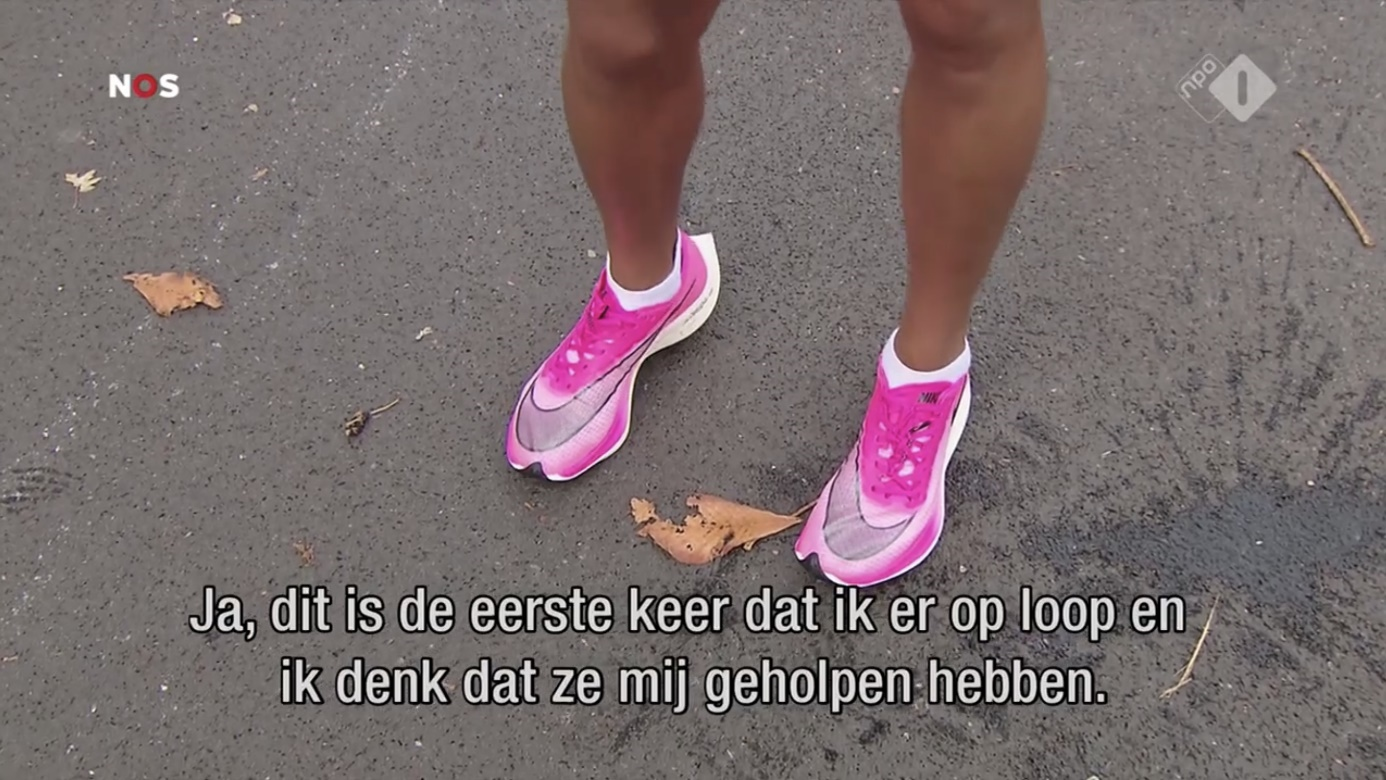 “yes, it is the first time I am wearing these shoes and I think they helped me”

The 21-year-old Ethiopian Letesenbet Gidey ran the world best time for 15 K women in the Nijmegen NN Zevenheuvelenloop (The Netherlands). Her time was with 44:20. She ran on the Nike ZoomX Vaporfly Next% shoes for the first time. She thinks the shoes helped her, said this great talent in the TV interview. Following our article about this top performance, we were asked what we think of this shoe?

After Eliud Kipchoge’s first attempt to run the marathon under 2 hours (Monza, May 2017), the first version of this shoe came on the market as Nike Zoom Vaporfly 4%. We bought the shoe ourselves at the time and compared it with the Adidas Adizero Adios in practical tests. This Adizero is the shoe that helped Dennis Kimmetto in the 2014 Berlin Marathon to the world record in 2:02:59.

Our practical tests with the Vaporfly 4% and Adizero showed no remarkable differences. The Adidas Adizero Adios turned out to be a shoe just as good as the Nike Vaporfly 4%. In Monza Kipchoge was with 2:00:25 only 2% faster than the world record. We therefore attributed this time improvement to the ideal circumstances and the optimal professional support rather than to the Nike Vaporfly 4%. However, we experienced that the Vaporfly 4% runs comfortable. Many running friends responded to the article and were sure that they owed their new PBs to the Vaporfly 4%.

The Nike ZoomX Vaporfly Next% is the successor of the Vaporfly 4%. The Vaporfly Next% came on the market around Eliud Kipchoge’s successful attempt to run the marathon under 2 hours (Vienna, October 12, 2019). However, in Vienna Kipchoge did not run with the Vaprfly Next% but on the Alphafly. The Alphafly has a thicker sole than the Vaporfly Next%. There are sources that think that the Alphafly has three carbon fiber plates in the sole. The Vaporfly has one carbon fiber plate in the sole. The suspicion of three plates stems from the patent that Nike has applied for, but this was probably not te case with the Alphafly. In our book “The Secret of Running” we elaborate on the question how much faster you run on competitive shoes. The crux of the Vaporfly is in the spring action of the carbon plate.

Today we are convinced that the Nike ZoomX Vaporfly Next% is truly a revolutionary running shoe. We demonstrate this in this article.

But the competition is not lagging behind. The Vaporfly has turned the marathon into a technological battle. The Adidas Adizero Pro comes on the market at the beginning of 2020 and would also contain a carbon plate. Prototypes of this Adidas answer have already shown their value in the 2019 New York marathon. Winner Joyciline Jepkosgei and runner-up Mary Keitany wore the new Adizero Pro.

Image: Exploded view of the Nike ZoomX Vaporfly Next% with the carbon fiber plate acting as a spring (source Nike).

Sports doctor Guido Vroemen, co-author of our book The Secret of Cycling, has tested the Vaporfly Next% with the Dutch newspaper Volkskrant journalist Eline van Suchtelen. This has led to an article in this newspaper and a nice report with animations on the internet.

Vroemen had Van Suchtelen run the treadmill in his Amersfoort-based exercise laboratory, determined her running economy (RE) with ergospirometry and looked at the difference in leg stiffness with Stryd (LSS). Van Suchtelen ran on her old Nike shoes and on the Vaporfly Next%. Both the RE and LSS were 1% better at Vaporfly Next%. With a marathon time of 4 hours, this saves two and a half minutes. Although this is a test with one person only, it does give an indication of the favorable properties of the Vaporfly Next%.

Just like Hans and Ron, Wouter Hoogkamer graduated from the Technical University of Delft (the Netherlands) as a civil engineer. Hoogkamer now introduces himselves as a “human movement scientist, combining my passion for running with my engineering background”. His athletics career started at AV De Spartaan in Lisse, the Netherlands.

Together with professor Rodger Kram, Hoogkamer conducted research in Boulder with the Vaporfly. The study required 30 athletes with shoe size US10. A requirement was also that they were 31 minutes or faster on the 10 K. In Boulder it is no problem to find such a number athletes.

The research showed that the Vaporfly yield a 2% to 6%, on average 4%, more favorable specific energy consumption (Energy Cost of Running, ECOR). This makes it clear where the Vaporfly 4% name comes from. Another outcome is that every athlete of every level benefits from the Vaporfly. Hoogkamer’s research results can be found on the internet and can be read in a scientific publication: A Comparison of the Energetic Cost of Running in Marathon Racing Shoes, Wouter Hoogkamer et al, Sports Med (2018) 48:1009–1019

In 2019 various world records were improved on the Vaporfly Next%. It started with the world record of Eliud Kipchoge (Berlin 2018, in 2:01:39). In September 2019, the 37-year-old Ethiopian Kenenisa Bekele remained with 2.01.41 only two seconds above Kipchoge’s world record. Kenyan Geoffrey Kamworor set the half marathon world record in Copenhagen in September 2019 at 58:01.

In the Chicago marathon (October 2019) the Kenyan Brigid Kosgei crushed with an incredible 2:14:04 the world record of 2:15:25 that Paula Radcliffe had held for 16 years. In November 2019, the Ethiopian Letesenbet Gidey added the improvement of the world best time on 15 K.

Many of the successes are in the name of athletes from the NN Running Team. The professional guidance of this brainchild of the Dutch athlete manager Jos Hermens will certainly have contributed to the records.

Data analyst and master athlete John Peters (Lickfold, England, UK) investigated the IAAF databases of marathons. Over the years, he has looked at the top 100 and top 1000 fastest athletes, both among men and women. The IAAF databases contain marathon results from all over the world. 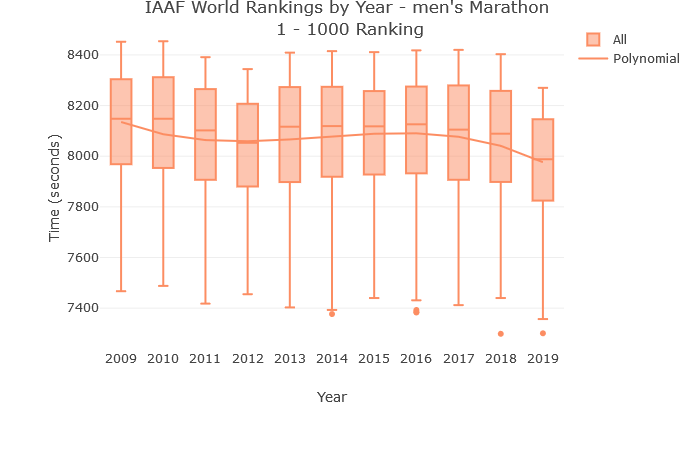 Image: development of the average marathon time of the 1000 fastest men over the years (source KittyJohne / John Peters)

The marathons of Tokyo, Boston, London, Berlin, Chicago and New York City form the World Marathon Majors. They are the largest and most prominent marathons worldwide.

The Japanese Rolows made an inventory of the shoes worn by the athletes who finished at the first, second and third place in these marathons. They added the marathon of the 2019 World Championships in Doha. In 2019, 10 of the 12 winners, both men and women, ran on the Vaporfly Next%. 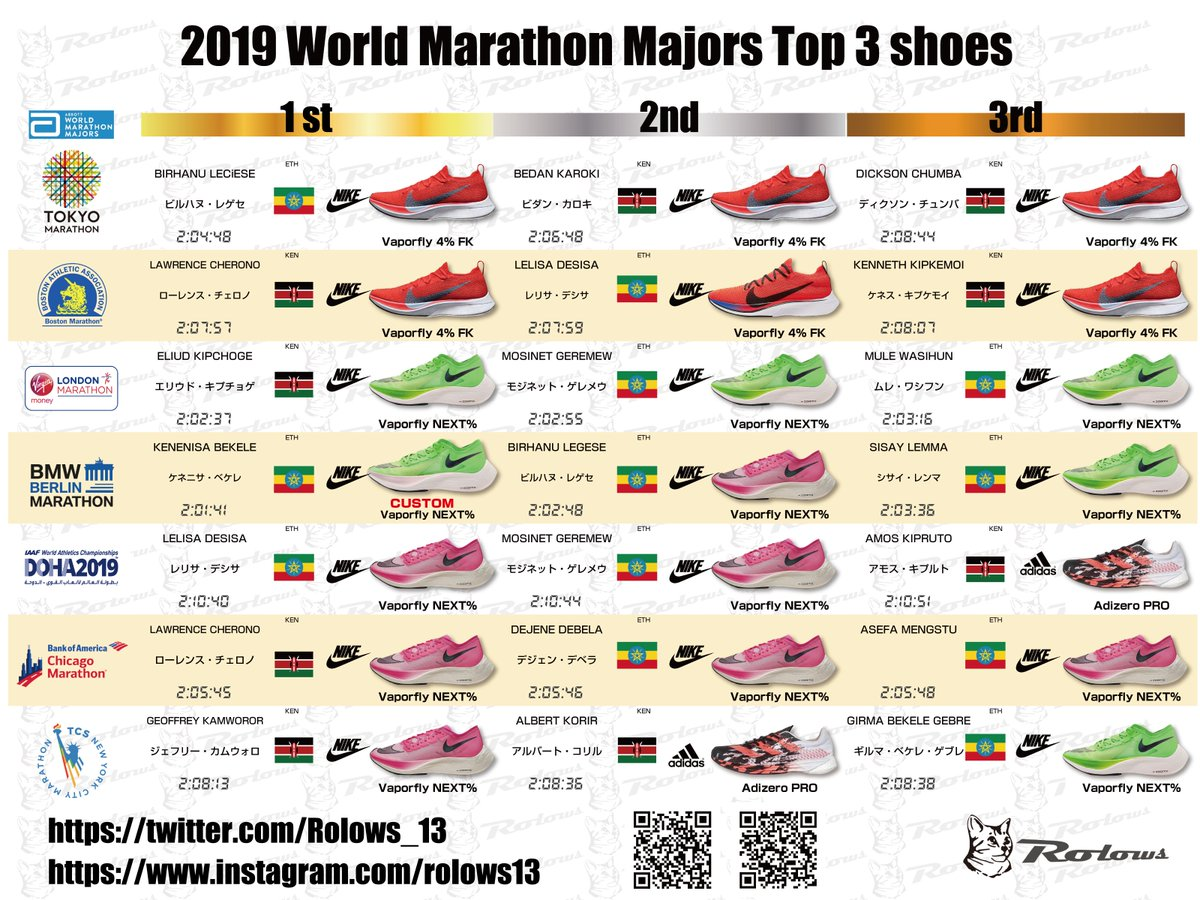 Image: Overview of shoes worn in 2019 by the first three men in the World Marathon Majors and the Doha2019 marathon (source Rolows)

In Strava athletes can indicate which shoes they are running with. New York Times has analyzed the Strava data of 577,000 marathons and 496,000 half marathons worldwide for the period April 2014 to December 2019. This is reported in a very interesting article.

From a long line of brands and models New York Times analyzed what you can expect as improvement of your running performance. The Nike ZoomX Vaporfly Next% appears to provide far better PBs than any other shoe. At an appropriate distance from the Vaporfly Next% the Adidas Adizero also scores high position in the ranking.