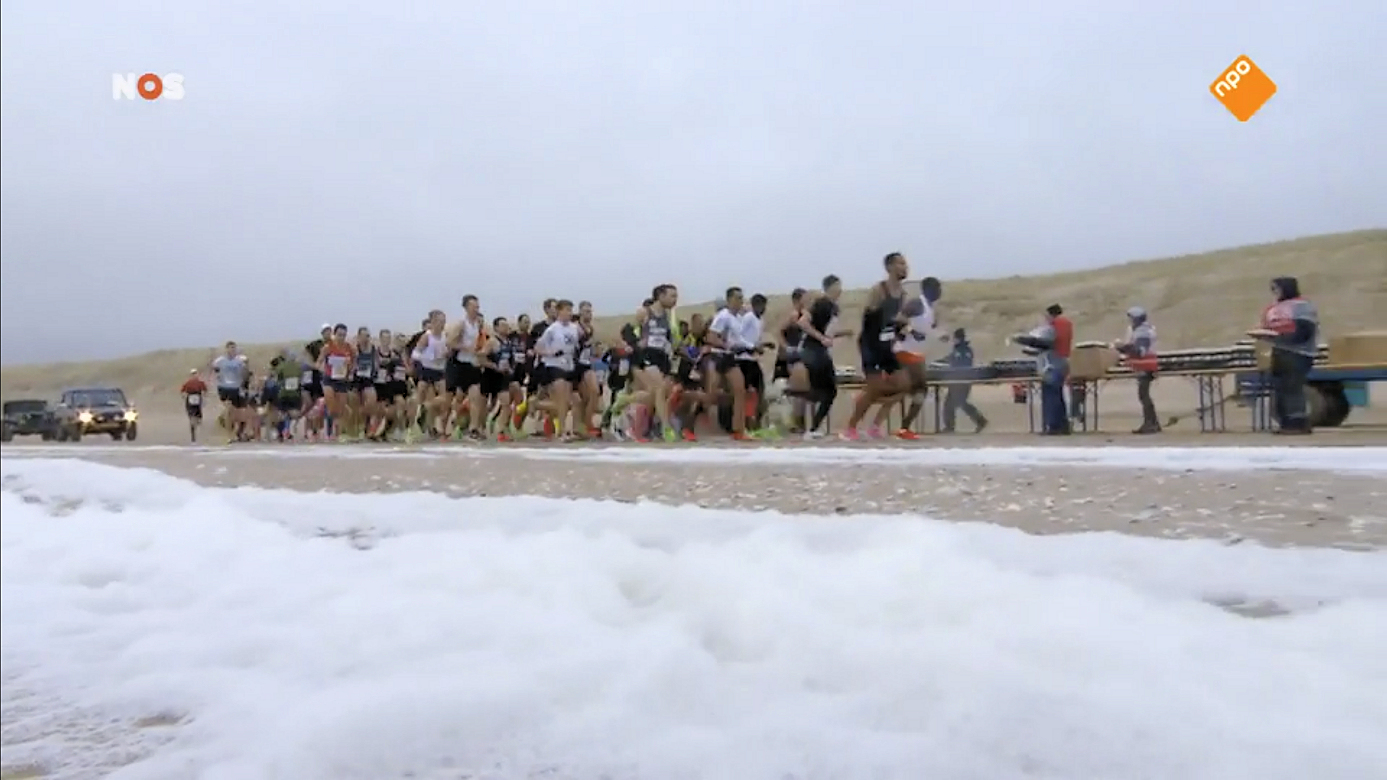 Photo: in a closed pack the runners battled against wind force 6 on the beach of Egmond in the direction of Castricum.

More than 10,000 participants in the NN Egmond Half Marathon had to face wind force 6 running on the 7-kilometer stretch of beach towards the city of Castricum. The elite athletes decided to waste as little power as possible. In a closed pack they kept each other out of the wind. In the dunes their race actually started and the pace picked up rapidly.

For this kind of weather circumstances we have running tips for everybody in our articles and book The Secret of Running. Wind force 6 is perfect to illustrate the impact of wind and Air Power on your running performance.

The 58-year-old athlete Niels Morpey ran the NN Egmond Half Marathon with a Stryd v3 with wind port. Niels was so kind to provide us his .fit file with running data for analyses.

“Once in the dunes, I could easily run my own speed. On the beach this was impossible. Unfortunately I started in the back of a group that was somewhat slow for me. In this group of about 20 runners I could often hide behind someone else, but not all the time. Also I ran short parts in front of the group.”, Niels explained.

Was it really so bad to start at the back? We think that this is not bad at all and running in a pack is a must in these circumstances.

In the table below we have summarized the average data of the performance of Niels and included the road map. Upto the turning point after the first 7 kilometers, the runners battled a fierce wind running on the beach at low tide. After leaving the beach the track went through the dunes with a lot of undulations. 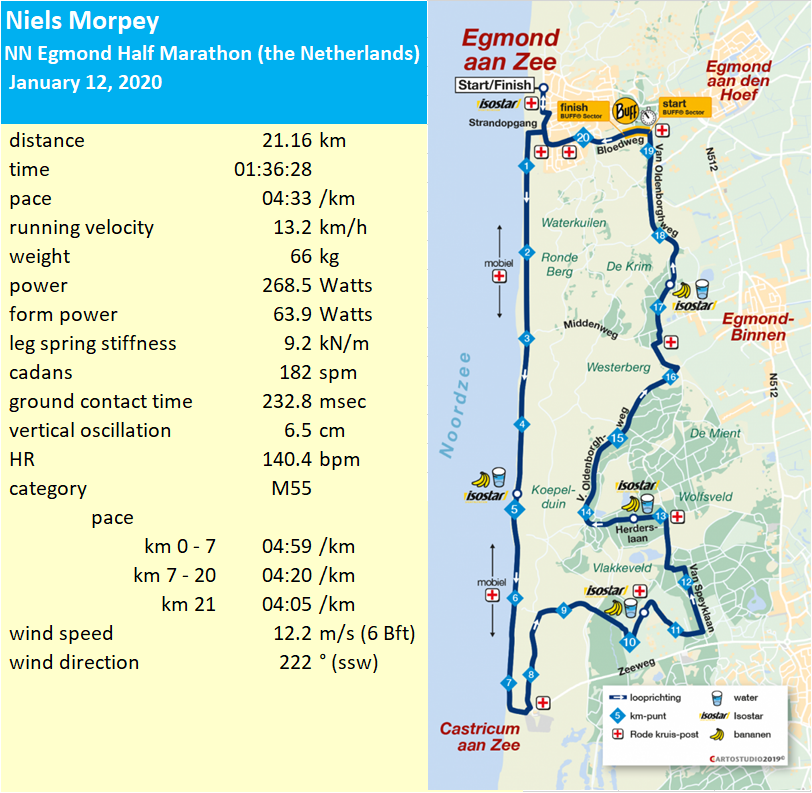 How high was the Air Resistance?

We have read Niels’ database into the Golden Cheetah analysis program. For every second we got the wattage that Niels (66 kg) needed to surmount the wind.

The first 7 kilometers, his Air Power averaged around 40 Watts, with peaks of 70 Watts and more. From the 19-K point onwards, Niels faced a crosswind which cost him around 20 Watts Air Power.

The graph below shows the Total Power and the Air Power of Niels during the run. The first kilometer was downhill and, as he said, Niels could not run his own pace. From the 2 K-point onwards his Total Power was around 270 watts. He managed to maintain this wattages throughout the race with a slight increase during the final kilometer to the finish. Well done, Niels! 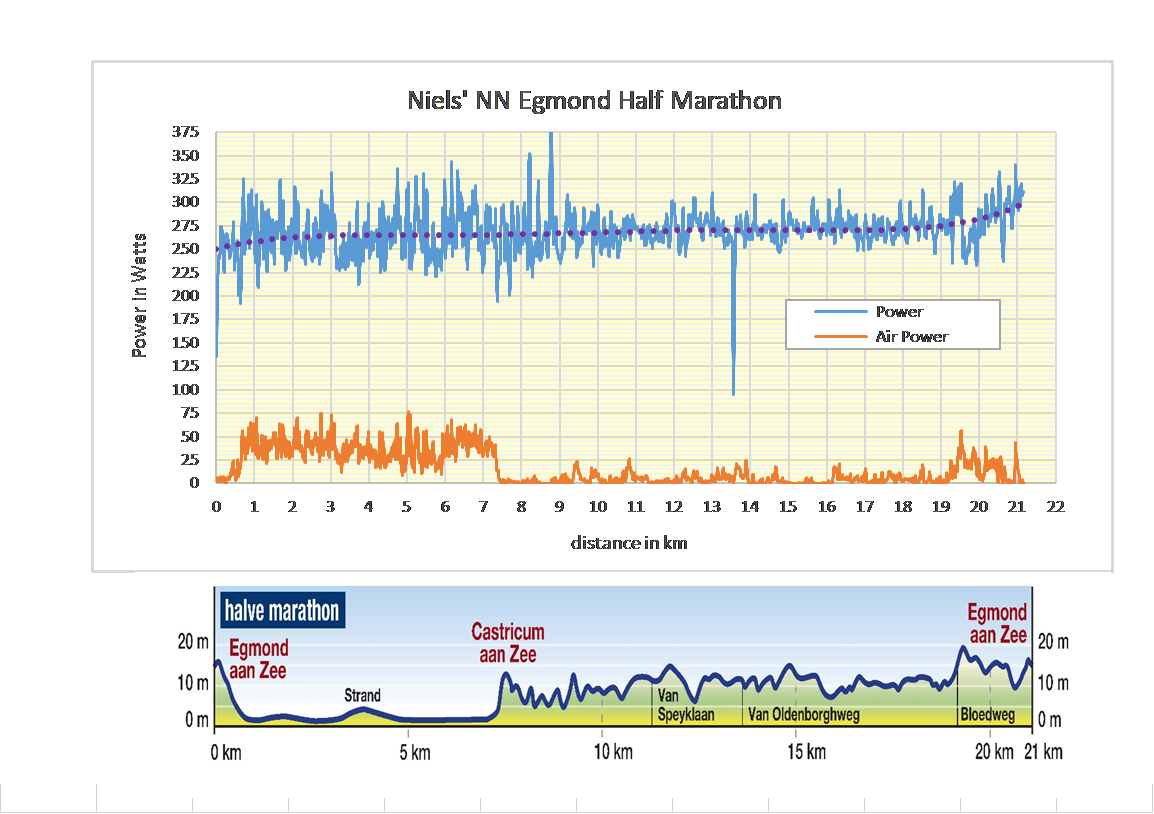 Run slower in head wind and faster at tail wind

On the beach, Niels needed a significant part of his Total Power for the Air Power. The next graph shows that consequently less power was available for his running resistance so his pace slowed. On the hard beach his pace was near 5:00/km. In the dunes with the same Total Power his pace was 4:20/km. Near the finish Niels sprinted in 4:05/km. On average, his pace was 4:33/km. Finish time 1:36:28.

At the y-axis the next figure shows what percentage of Total Power was needed to surmount the wind. We show his running velocity on the same scale (in km/h). On the beach 12 km/h. In the dunes almost 14 km/h and in the final sprint around 15 km/h. 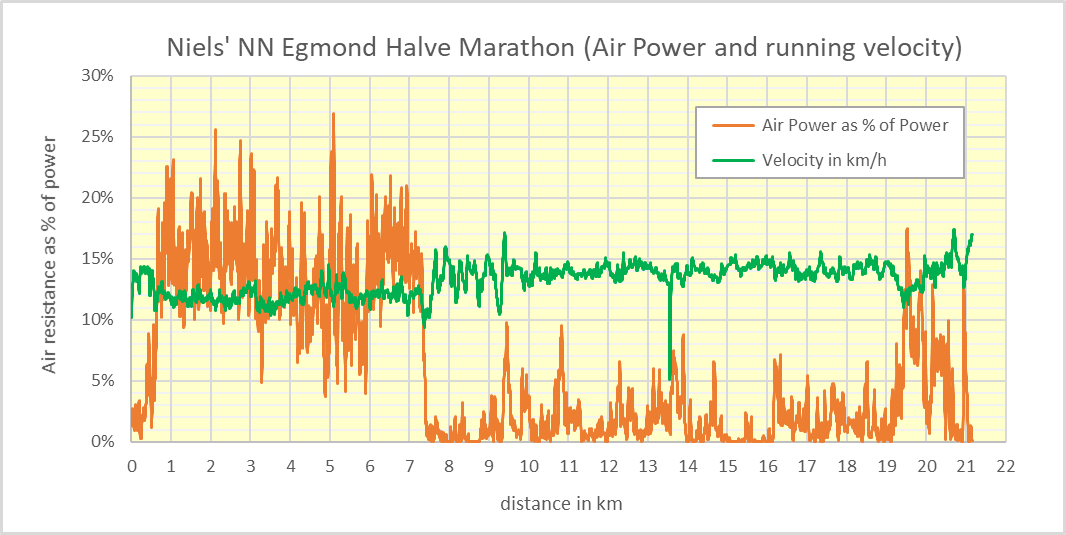 How much time lost due to the wind?

In Egmond, Niels finishing time was 1:36:28. His wattage was 270 watts on average. What would Niels’s time have been in ideal conditions, so no wind and on a hard and even road? In a previous article we showed how you can calculate the finish time for a certain wattage. In the case of Niels (half marathon, 66 kg, 270 watts) this would have been 01:29:24. Consequently, for Niels, Egmond turned out to be 7 minutes slower than a half marathon in ideal conditions.

How big was the advantage of running in the pack?

Due to the wind Niels lost about 40 watts on the beach. The question is how much Niels benefited from running in the pack there? The wind direction was southwest, at around 40° angle against the runners, with an average wind speed of 12.2 m/s, wind force 6.

With our exact running model we have calculated that in these conditions 84 watts is required to overcome the air resistance. Thanks to the Stryd footpod we know that on average Niels needed around 40 Watts. Consequently, the average Air Power was 52% less than theory. The difference can largely be explained from the advantage of running in the pack. In cyling similar percentages are known from riding in a pack. Of course the wind speed may also have been higher or lower at times. Finally, we draw your attention to the outliers above 70 Watts in the graph, which in our opinion show the moments when Niels ran in front of the group. At these moments he did not have the advantage of the pack, so his Air Power was near the theoretical calculations.

All in all, we believe this case is a near-perfect example of the validity of the concept of Air Power and the usefullness of the Stryd in these conditions. We conclude with a final remark from runner Niels himself: “it is almost unbelievable how accurate and usefull Stryd is”. Very usefull indeed in windy the Netherlands.