In 2019 Koen Demyttenaere of Polar asked us to test their new Polar Vantage V watch. We found this very interesting, especially since the Polar Vantage V also gives your running power in Watts. We published our findings in two previous articles, part 1  and part 2. The Polar Grit X is the robust brother of the Polar Vantage V.

In these tests, we noticed that the power data of Polar are a lot (order 25-30%) higher than the values of Stryd and those of our science-based running model. We did not understand this and asked Koen for further information about the backgrounds of their algorithm. Here we want to complement Polar on their openness in this repect. Through Koen we got in touch with their chief scientist from Finland, dr. Jussi Peltonen, which led to a very good scientific discussion. We also received an internal white paper on the backgrounds of the running power calculation programmed in the software.

All this led us to derive a clear conclusion on the cause of the difference of 25-30%. Polar reports gross running power (based on measurements with force plates) and Stryd reports net running power (based on measurements of oxygen consumption in running). The difference between the two is the elastic energy recovery in your Achilles tendon and the muscles of your lower leg when your foot lands on the ground.Because your running performance is mainly determined by your oxygen consumption, we prefer the net power. In our running model, we also work with the nett power needed to overcome the running resistance, the drag and the climbing resistance.

Koen recently pointed us to a new innovation of Polar: the use of Big Data. Jussi Peltonen and a researcher from the University of Paris have written a groundbreaking article about this. Below we give a summary of the idea behind Big Data and the results of the research by Thorsten Emig and Jussi Peltonen.

What’s the idea behind Big Data?

Traditionally, the research and knowledge on running was mainly based on physiological tests in the laboratory. Parameters such as the maximum oxygen consumption (the VO2 max in ml/kg/min), the lactate threshold and the Running Economy (the oxygen consumption per km in ml/kg/km) of small numbers of runners on a treadmill were and are determined.

In addition, the endurance is also considered, such as the percentage of the VO2 max that can be maintained for a longer period of time. Such research has the advantage that specific hypotheses can be scientifically tested under precise conditions. Disadvantages include that the research is limited to small test groups and the performance in practice is partly determined by many other aspects like the weather, the course and the shape of the day.

In recent decades, we have seen a huge growth in the use of sports watches and other wearable sensors. Nowadays more than 1 billion training and competition sessions are uploaded worldwide every year on various platforms such as Strava, TrainingPeaks, Garmin, Stryd, Polar, etc.

In principle, this “Big Data” offers a great opportunity to monitor physiological information non-invasively under real-world conditions outside the laboratory. This can lead to new insights and knowledge on the effect of training and races for large parts of the population, ranging from joggers to top athletes.

In principle, the possibilities are endless, such as optimization of training programs, accurately predicting race times, the (positive) health effects of physical training, early detection of injuries or overtraining, early discovery of talents and even the effect of ‘performance enhancers’, including shoe technology.

We are convinced that presently we are only at the very beginning of the use of Big Data and that the knowledge on running will accelerate in the coming years. So we certainly expect Big Data to help us get faster (and healthier) in the future.

What is the present state of knowledge on Big Data on running ?

Emig and Peltones analyzed the data of 19,000 people who have run a total of 35 million km in 3.5 years. The data came from Polar V800 watches and the Polar Flow platform. Compared to the many millions of sports watch users, this is still a limited first step in using Big Data. A total of 25,000 competitive seasons were analyzed. The average distance per session was 12.9 km and the total number of races was 85,000.

The main results were:

Their model was found to give an accuracy of 2% for ‘regular’ race and 10% for the marathon. Of course, weather conditions and the race course play a bigger role in the marathon, which cannot be predicted with their model.

This is the most interesting part of the research. They looked at 3 aspects:

They found a statistically significant positive linear relationship between the number of training kilometers and the achievable speed vm (this is the speed at the VO2 max),as shown in the figure below. This positive relationship is in line with the literature.
Their hypothesis is that this is due to improvement of the Running Economy. In other words, the runners will run more economically as a result of endurance training. Unfortunately, based on the data, another explanation cannot be excluded, namely that fitter runners (with a higher vm) train more kilometers. 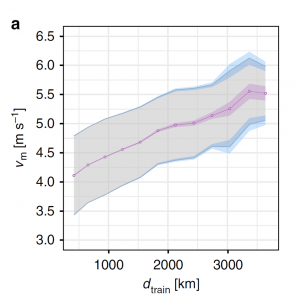 Here they found a negative relationship between the training intensity and the achievable speed vm, as shown in the figure below. This is also in line with the literature which states that a large percentage of training volume should be run at low speed during endurance training.

The results can therefore be explained by assuming that fit runners follow this training advice. Unfortunately, based on the data, another explanation cannot be excluded, namely that the watch has not been stopped during intervals or rest periods during the training.

Here they found a very interesting result, namely that endurance (expressed in a factor El) increases linearly with TRIMP, but from 25,000 onwards it decreases again, as shown in the figure below. The latter could be an indication of overtraining.

We expect that Big Data will certainly be able to help us get faster (and healthier) in the long run. The vast amounts of data uploaded worldwide to platforms such as Strava, Garmin, Stryd, Polar and the like are a potential gold mine to increase insight and knowledge on running and training methods and to optimize the performance of runners.

The research of Emig and Peltonen must be viewed in this light. It is a first step in analyzing and using Big Data to help us run better. The results discussed also show that it is certainly not easy to translate Big Data into useful knowledge and insights. Problems in interpreting the results include:

However, we can expect that in the future these and other problems will be solved so that Big Data can really help us to run better.

Stryd has developed a promising concept in this regard with the Stryd Power Center. Strong points of this concept are the fact that it is based on power (which basically allows the influence of the weather and the course to be taken into account) and that each runner gets his own data incorporated into his Power Duration Curve (so that the large individual differences such as Running Economy between runners do not cloud the image).

In short: we look forward to a future with Big Data (for running of course, where we do not worry so much about privacy issues).