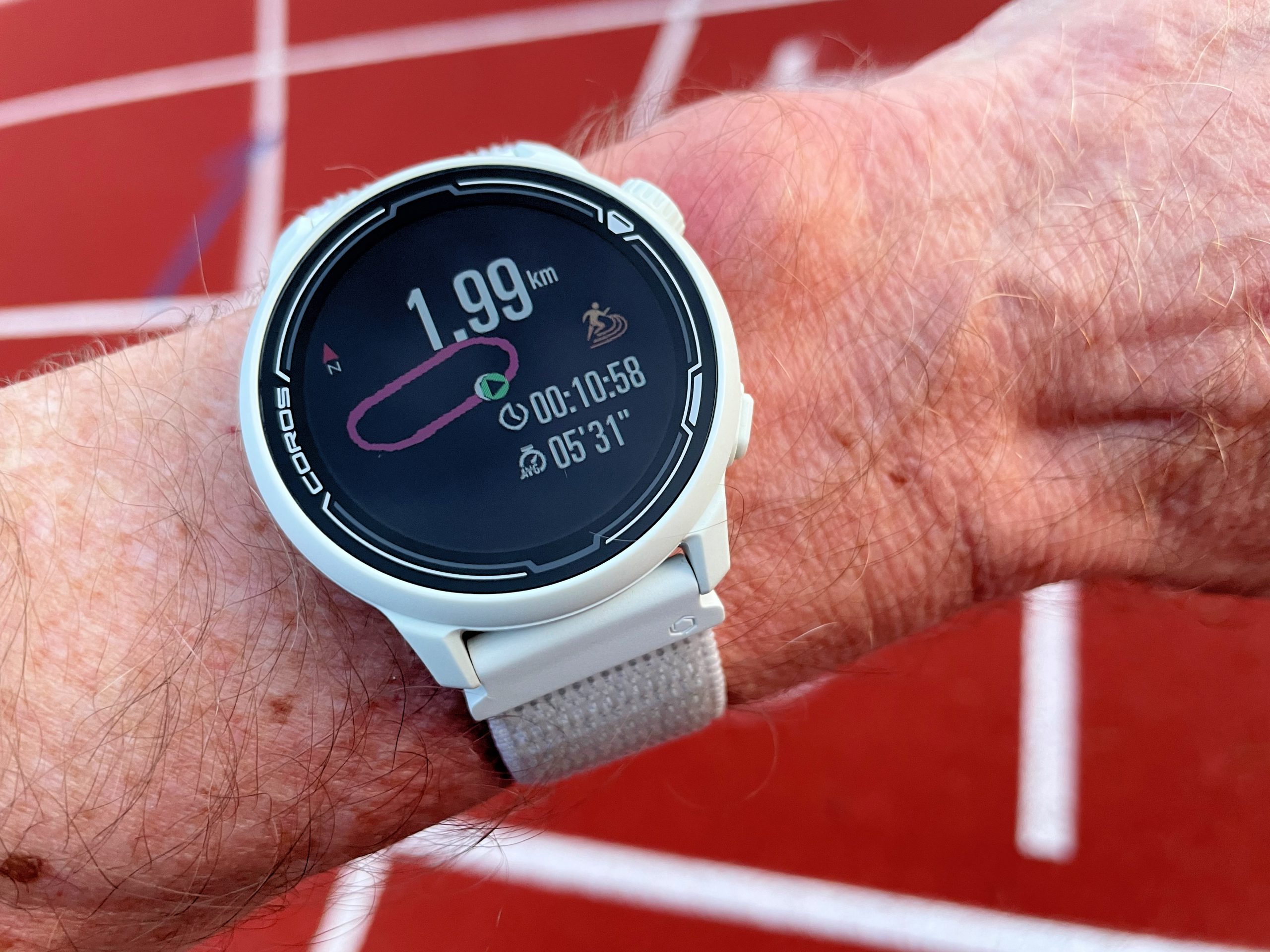 Mid-December we discussed the favorably priced new Coros Pace 2. ‘The lightest GPS watch on the market with only 29 grams’ with Eliud Kipchoge as brand new ambassador. We’ve been using the watch daily ever since. In this article we show that the Coros Pace 2 keeps its promises. There are also side notes. Maybe these are not equally important to everyone.

We compare the Coros Pace 2 with a Garmin Fenix 6X, a 93 gram high end multisport watch, and with the Stryd running power meter. This evoked reactions from a reader. He thought you shouldn’t compare a Volkswagen to a BMW. On the contrary, we find a comparison with a top model interesting. To speak as a Consumers’ Association, the reader can decide for himself or herself whether he or she is going for the best or for the best buy.

Both the Garmin and the Coros were tested using the American GPS and Russian Glonass. At Coros you can choose from three combinations of satellite navigation networks:

Garmin has three other choices:

The more satellites such a watch “sees”, the more accurate it is in terms of location and speed. The satellites do not necessarily have to be from different networks.

In the picture below we give an example where 7 laps of 1,450 meters were run around the  complex of the Amersfoort Athletics Club Altis. With one exception, at the start/finish always a lap was given. The Coros tapped after 7 laps 10.01 km, and the Garmin 10.04 km. A difference of 30 meters. We find that negligible for satellite systems over this distance.

The picture  shows that both watches have a considerable spread in the width of the course. If we look at the laps (of 500 meters), those of Coros fall slightly better together in groups. Based on this you could say with some good will that Coros does fractionally better than Garmin.

In the same training we compared Coros Running Power with Stryd Power. According to the Coros, on this flat course we ran with an average of 243 Watts. Stryd has an average of 247 Watts, of which 2% is due to the wind. If we zoom in, we can see why. The power on the individual laps differs with head wind and tail wind. It blew with 19 km/h, a strong wind force 3, not very hard but already important if you want to run an even race. After all, you set your fastest time if you run with an even wattage. In the picture of the Garmin you can see that the wind was therefore slightly lower (mostly blue) and the wind slightly higher (mostly green with some orange).

Because of the correct measurement of the wind resistance, Stryd wins from Coros Running Power.

In the previous article we already mentioned that both watches have an opportunity to improve accuracy on an athletics track. GPS watches are quite different on the track due to the many curves. Like Garmin, Coros offers the ‘Track Run’ activity for this. In both cases it is advised to first run a minimum of four laps on the track to calibrate the watch. We have done this. Coros indicated after the first lap to recognize the track. Subsequently, both watches ran twice 2,000 meters (5 laps) in track 1 at the same time. After that another 2,000 meters was run twice, but with the regular activities ‘Run’.

The image below shows that ‘Track Run’ is a powerful solution for the annoying deviation of GPS watches on an athletic track. Both watches score well. The fact that Garmin even came twice at exactly 2,000 meters is excellent. The image also shows examples of five laps that were run with the normal activity ‘Run’. It then wrongly seems as if the running track has been used over a large width. Only track 1 has been used. Garmin performs better than in previous tests on the track. Possibly this is due to intermediate software updates. With Coros panting in the neck, Garmin wins with ‘Run on track’.

The average wattages of Stryd and Coros Running Power were exactly the same twice per track session, differing twice by 1 Watt and once by 2 Watts. 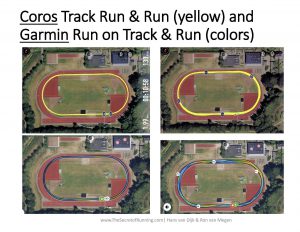 We don’t really have many comments about the combined use of the Coros Pace 2 and a Stryd. That works well. One detail seems to be that the Coros loses connection with the Stryd for a while when you are standing still, for example when you have to wait at a traffic light or when you stop after an interval. This small problem will probably be solved with a software modification followed with an update of the watch.

For the power field on the screen of the watch, just like with the Garmin, a 10 second average wattage has been chosen. Cyclists will recognize that power meters vary slightly in value. By displaying the average over a number of seconds, the image smoothens a lot.

The Coros Pace 2 can also display the running power without Stryd. For this purpose, the watch uses GPS and a barometer. Garmin Running Power and Polar Running Power do the same. The difference with Garmin and Polar is that Coros, just like Stryd, calculates the power needed to run, as we use in our book ‘The Secret of Running’, and is common in cycling. Garmin and Polar produce an approximately 25% higher gross power value.

If you also buy the Coros Pod, the Coros delivers extra running metrics, similar to Stryd and what Garmin offers when wearing the HRM-Run chest strap. By the way, Stryd doesn’t provide any heart rate information. The Garmin chest strap does, of course. Garmin gives no information about Form Power. With a relatively lower Form Power you have a more efficient running style.

The Coros Pod must be attached to the waistband on your back. That feels like you can lose the Pod on the way, but that hasn’t happened. It clamps firmly. Still, attaching it to the laces of the shoe (if that were possible), as with Stryd, would give you a more secure feeling.

Actually, we only have two comments about Coros Running Power in this part of the test. Ron entered a workout in the Coros for this. We described this option in our first article about the Coros Pace 2. 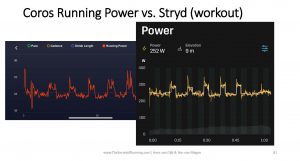 It goes without saying that we also did the same training once as in previous tests of running power devices: a training with a one-kilometer ascent and about as long a descent. Coros receives height difference data from an accurate barometer to determine its running power. Stryd also has a barometer on board and combines this with accelerometers in several directions. Uphill the Coros comes close to the Stryd values. Downhill it deviates with 8-9 Watt lower (3%). This can largely be explained by the (limited) headwind on this part of the course that Stryd does and Coros does not count on. The Stryd is in this test part only better than Coros Running Power because it does take the impact of wind into account.

The total distance of this training was according to the Coros 18.35 km. Based on the Stryd data, the Garmin came out at 18.40 km. With this difference we can certainly live.

The best buy is a Coros Pace 2 with a Stryd. You don’t need the Coros Pod with this combination and you don’t have to buy it.

The Garmin Fenix 6X is robust and more representative than the cheap looking Coros Pace 2. Garmin combined with a Stryd offers some more options than Coros, such as a map with navigation on the watch. This is not something that the average runner uses a lot. More expensive models of Coros do have a map function, but not as nice as GPS specialist Garmin. All in all, we give Garmin the predicate ‘Best’ in this test. With a Stryd to make it complete.

Honestly, we do make a Volkswagen against BMW comparison here, as the reader of our first article about Coros rightly mentioned. The choice is more a matter of taste and wallet. Under the hood, they don’t do much under for each other. Garmin also has cheaper models that work well with a Stryd.

The heart rate measurement on the wrist leaves us in the lurch in both cases. To make it complete, take a heart rate chest strap as well. With the Garmin HRM-Run chest strap you get a lot of running metrics extra and (with some models) also Garmin Running Power (based on GPS).

What we didn’t expect is that the white nylon strap of the Coros stays white. Of course we always rinse it under the tap after a workout. The Coros Pace 2 is also available with silicone straps and in dark blue. The promised battery life of 30 hours of exercise is what Coros really delivers. The Garmin Fenix 6X the 60 hours as well. Both, of course, depending on the functions used.