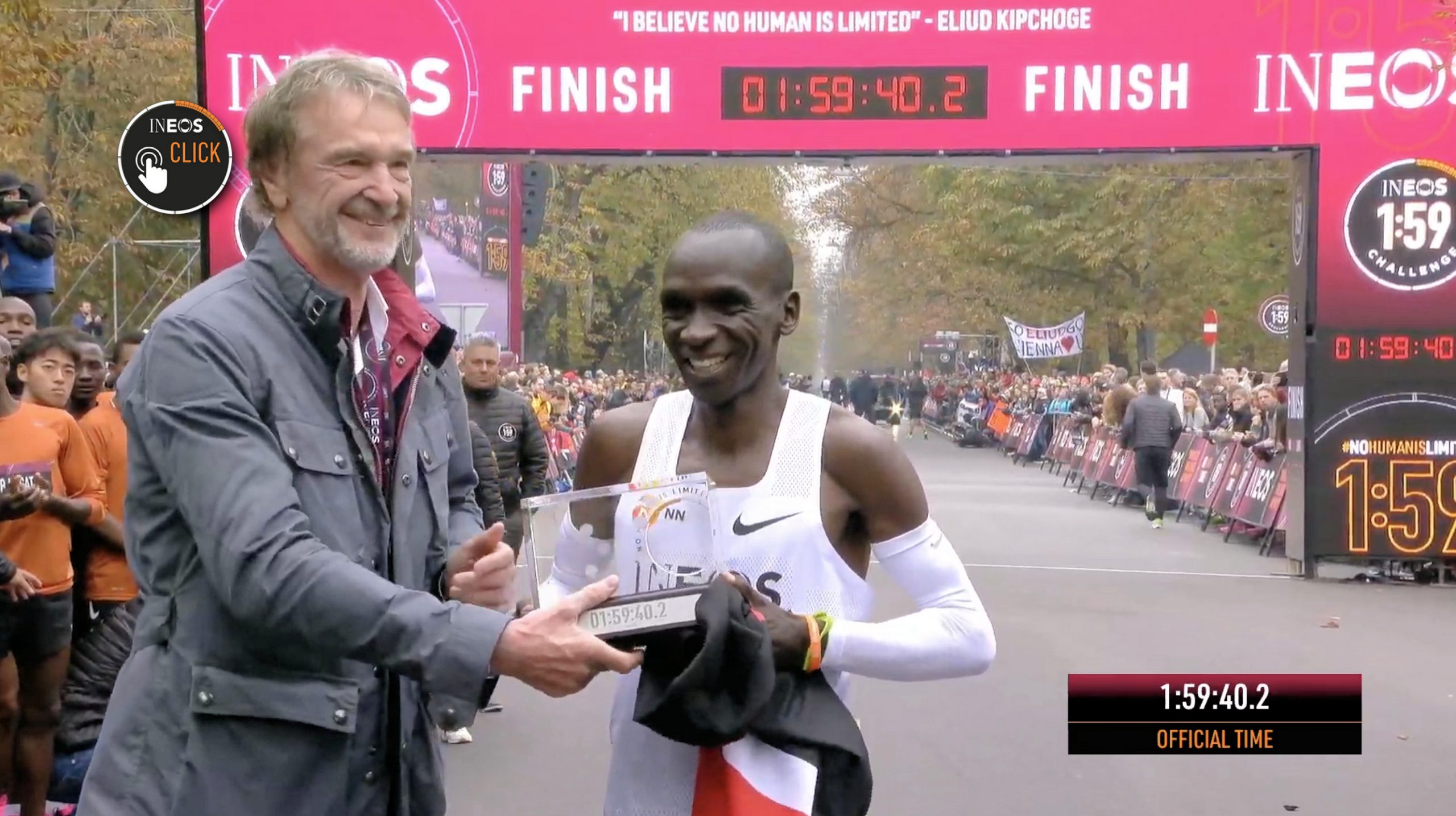 It has been 1 year since Eliud Kipchoge in Vienna succeeded in his mission to break the 2 hour barrier for the marathon. Athletics enthusiasts from all over the world were glued to the tube on October 12, 2019 to breathlessly admire his groundbreaking result with a fantastic 1:59:40.

In a previous article, we analyzed this performance and found that Eliud and his team of 41 pacers and coaching staff delivered a unique and historic achievement.

Recently, an interesting scientific paper has been published of the physiological studies carried out on the team of Eliud and his pacers for the earlier ‘Breaking2’ attempt in Monza, Italy. Alex Hutchinson of Sweat Science has summarized and analyzed the results on his website. We have also used the data from the study itself to evaluate and review Eliud’s performance in the context of our universal running model. 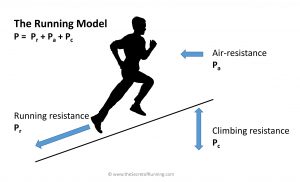 In our books Hardlopen met Power! and The Secret of Running we have shown that your marathon time in ideal conditions (flat and hard course, few turns in ideal weather, so no wind and low temperature) depends on the following factors:

The nice thing is that the first 3 parameters have been analyzed in depth in the above mentioned research. Sixteen top runners of Nike’s ‘Breaking2’ marathon project were investigated in the laboratory and on the track. The runners were mainly from Kenya and Ethiopia and had an average PR of 1:00:04 on the half marathon and 2:08:40 on the whole marathon (this last number is a bit less because Zersenay Tadese had not yet run a fast marathon). The data is anonymized, so we do not know the individual data of Eliud Kipchoge. The oxygen consumption has been measured in a classical way, not only for the determination of the VO2 max, but also during test runs with a speed of 21.1 km/h!

The most striking result of the study is that the average VO2 max of these elite runners was “only” 71 ml/kg/min. For such elite runners a higher value would have been obvious. The maximum measured value was 84 ml/kg/min, so we assume that this was Eliud Kipchoge. On the internet you can find several websites where an overview is given of the highest values of the VO2 max ever measured.

The table below gives a summary of this: 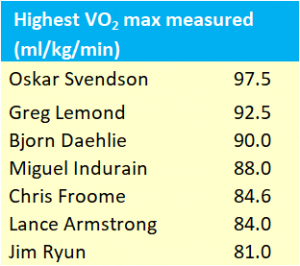 The table shows that the value of 84 ml/kg/min is high, but not exceptional. Occasionally even higher values have been measured, especially for cyclists and cross-country skiers. It should also be noted that Oskar Svendson’s VO2 max is known to be exceptionally high, but this was at the expense of his metabolic efficiency (which was lower than the normal value of 25%).

In our book The Secret of Running  we have shown that you can calculate the power P of your human engine using the following formula:

This power is valid for the duration of the VO2 max test, i.e. 10 minutes. You can compare this power with the top values of professional cyclists who sometimes reach similar values during short climbs of 10 minutes. Because Eliud weighs 56 kg, his total power is 6.84*56 = 383 Watt, also during 10 minutes.

The second special (albeit perhaps slightly less striking) result of the study is that these elite runners have exceptional stamina. They turned out to be able to run the marathon at 88% of their VO2 max! This is really very special, for normal 84% is already a good value and many runners don’t manage more than 75-80% of their VO2 max during the marathon.

The third special (albeit slightly less striking) result of the study is that these elite runners have a very efficient running style. They use very little oxygen and therefore energy per km. The average oxygen consumption was only 191 ml/kg/km. This corresponds to a net energy consumption (ECOR) of 0.93 kJ/kg/km. For regular runners a value of 0.98 kJ/kg/km is already nice and values of 1.10 kJ/kg/km and higher are common with less trained runners. Where you can compare the VO2 max with the power of your human energy you can compare the energy consumption with the gas mileage. These elite runners are very economical and can therefore run faster with their VO2 max! In Vienna Eliud also ran with the latest Nike Alphafly shoes. According to Nike they are the fastest shoes ever made. This will also have had a positive effect on the energy consumption.

Reducing aerodynamic drag has definitely been a key success factor at the super performance in Vienna. Eliud received help from five teams, each with seven pacers that alternately kept Eliud out of the wind. The team of pacers included several world champions. The pacers ran in a surprising V-formation. The captain of the team ran in front of Eliud, with oblique left and right in front of the captain 4 pacers. Left and right behind Eliud were the sixth and seventh pacers. They also used a  pacer car, which drove 15 meters in front of the group, so that the airflow was optimal. From the car, laser lines were projected on the road surface as an aid for the pacers to maintain the right pace. On the road surface guiding lines were drawn. The picture nicely shows the formation with Eliud in the middle and the next team of pacers ready for the relay. The
design of this formation made use of the knowledge and test facilities of Professor Bert Blocken of Eindhoven University of Technology. 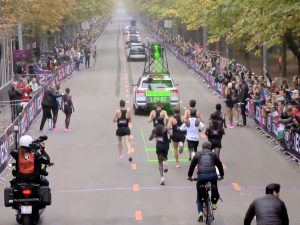 View of the exchange of the pacers. Eliud Kipchoge runs in white.In our previous article we already showed that all these measures had the effect of reducing air resistance by 33%. If Eliud would run alone, without pacers, we estimate his cdA air resistance value at 0.24 m2, given his stature. In Vienna, his cdA value was only 0.16 m2. With our model, we calculated that the energy consumption for the air resistance was therefore only 0.06 kJ/kg/km (i.e. only 6% of the energy consumption for the running movement itself).

The research of the Nike ‘Breaking2’ marathon team has provided interesting insights into the physiological data of Eliud Kipchoge and his pacers. The most important findings are:

We have entered this data (and the other data such as temperature, air pressure, altitude and wind speed) into our running model. The result is that the model calculates a speed of 21.2 km/h, so very close to the speed of 21.1 km/h Eliud reached.