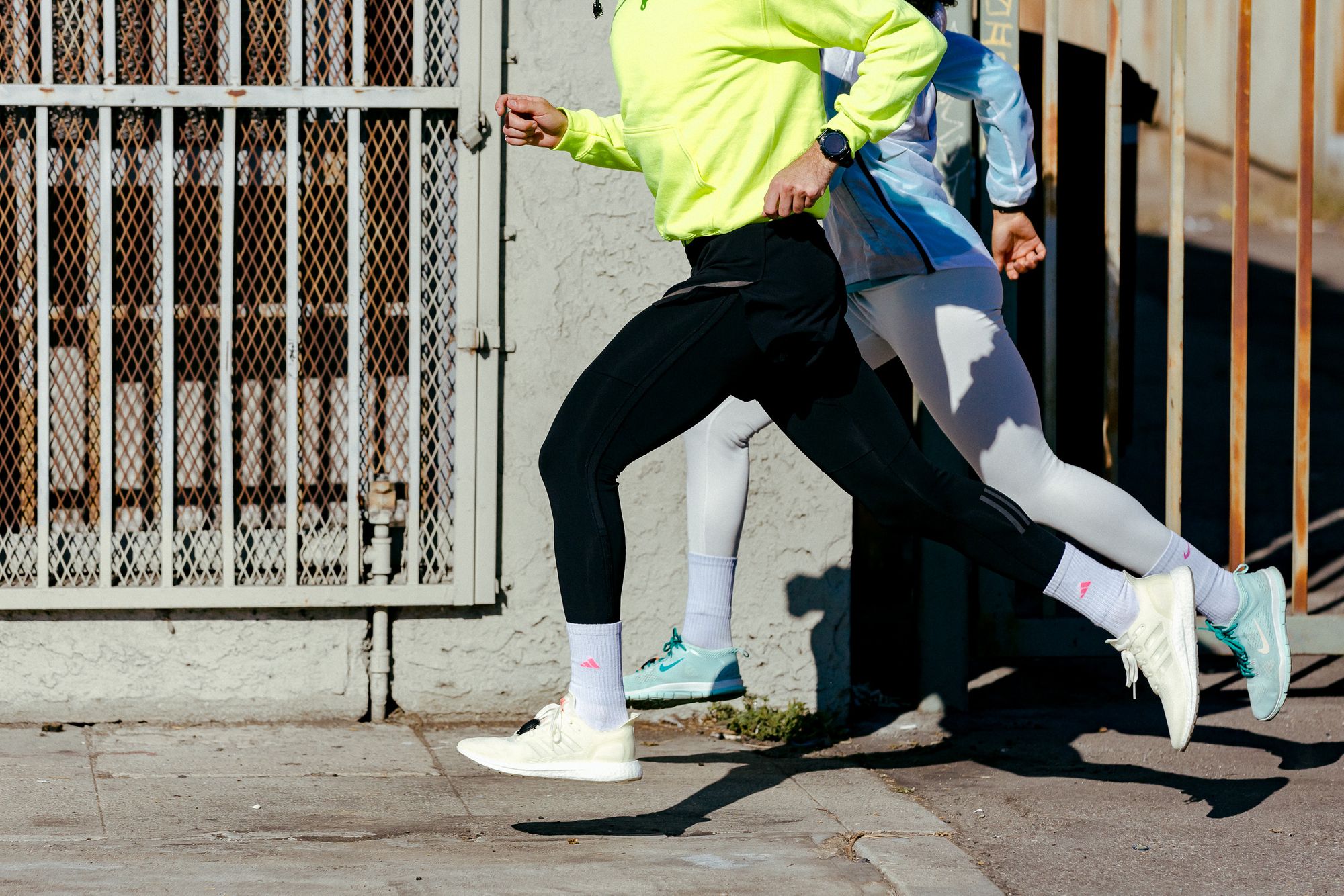 The holy grail of distance running has always been to use less energy and oxygen at a certain speed. The recent breakthrough of power meters raises the question whether we can use the new running metrics to learn how to run smarter, more economical and faster?

In recent running research, together with Radboud University of Nijmegen, the Netherlands, we found interesting correlations between Running Economy (RE) and Leg Spring Stiffness (LSS). LSS is one of metrics coming available with the day to day use of power meters.Previously we published about the Energy Cost of Running (ECOR) on TrainingPeaks and showed how valuable this parameter is for the day-to-day determination of running economy and running style improvement. Thanks to power meters we have easy access to new metrics for evaluation and improvements for the ultimate goal of running faster at a certain effort.

Leg Spring Stiffness is a measure how well a runner recycles the energy applied to the ground. This metric measures the stiffness of the muscles and tendons in your leg. Increases in LSS2 is said to indicate economy improvement over time. LSS is individual and cannot easily be compared across different runners and should be standardized for body weight in comparisons over time. For this reason, trends in LSS/kg for specific speeds should be the focus of the analysis.

Next to VO2 max, Running Economy (RE) is widely considered the best predictor of endurance running performance. However, most runners are not in the position to determine their RE often. The RE is usually determined in a physiological laboratory from the oxygen consumption VO2 at a constant submaximal speed v with the formula from the box. Economical runners use less oxygen at the same speed, their RE is less than 200 ml O2/kg/km. Despite being simple and widely used, research has shown that RE is a complex, multifactorial concept that reflects the integrated composite of many metabolic, cardiorespiratory, anthropometric, biomechanical and neuromuscular aspects. As a result, it has not been possible to come to firm conclusions which running style is the most economical. Nevertheless, it is possible to reduce the RE (and thus become more economical) with training. The most famous example is Paula Radcliffe, who managed to reduce her RE from 205 to 175 ml O2/kg/km in 10 years of meticulous and consistent training.

With the emergence of running power meters, such as the Stryd, it has become possible to determine an alternative for the RE, i.e. the (mechanical) Energy Cost of Running (ECOR). The ECOR  can be calculated from the power P and the speed v of each run with the formula given in the box.

So ECOR can be made available by an easy calculation as often as desired. Economical runners use less mechanical energy, their ECOR is lower than 1.0 kJ/kg/km. In our book The Secret of Running3 (www.thesecretofrunning.com), we have derived the theoretical relationship between RE and ECOR, as presented in the box.

In order to run smart and fast, runners need to find a way to reduce their ECOR and RE. Nowadays, running watches, pods and smartphones provide the opportunity to determine various running metrics such as cadence, Ground Contact Time (GCT), vertical oscillation (VO), stride length and Leg Spring Stiffness (LSS). This opens the opportunity for runners to try to optimize their running style in order to reduce their ECOR (and ultimately their RE).

Higher LSS is closely correlated to lower RE

This year we performed a research project4 at the physiological laboratory of prof. Maria Hopman at the Radboud University of Nijmegen (RUN), the Netherlands. The project included 13 young runners (12-17 years) of the Team Seven Hills coached by former European Champion 800 m Bram Som. All runners performed a maximal incremental exercise test on the treadmill (velocities between 11-21 km/h), both at the beginning of the project (baseline) and after 16 weeks training. Oxygen consumption was monitored and various running metrics were recorded using a Stryd power meter.

A Pearson correlation analysis was conducted of all the results (11 runners, 6 velocities and 2 tests, so a total of more than 100 data) to assess the relation between ECOR and RE and various running metrics. The main results are summarized in the table below.

Regarding ECOR, the correlations confirm that ECOR is lower at higher speed (negative sign), at higher cadence (negative sign), at lower GCT (positive sign) and at lower vertical oscillation (positive sign). This is in line with theory as the vertical movement and ground contact should be limited. It is noted that the relations between ECOR and cadence and between ECOR and vertical oscillation were statistically significant at the 0.05 level (indicated in bold).

Regarding RE, the results confirm that RE is lower at higher speed and at lower GCT. Both correlations were statistically significant (after 16 weeks, indicated in bold) and are in line with literature findings The correlations between RE and cadence and vertical oscillation are counterintuitive, but these are weak and probably reflect the fact that RE is the integrated composite result of many parameters. The most striking result is the strong and statistically most significant correlation (even at the 0.001 level) between RE and LSS.

Physiological explanation for the relation between LSS and RE

As explained before the LSS represents the stiffness of the leg muscles and tendons. It is known from literature that stiffer muscles and tendons are able to recoil more elastic energy upon landing. As a result, runners with a higher LSS use less energy and oxygen, so their RE is lower. We believe that the strong correlation between RE and LSS is very important. Important in the sense that it may explain some of the puzzling results, such as the counterintuitive relationship between RE and VO. From the results of individual runners, we noted that runners with a high VO also had a high LSS. This means that most of their higher vertical energy use may have been returned as elastic energy.

The results are also very promising for applications in the running community as runners may use LSS as an indicator of their RE on a daily basis. They may follow the impact of training and running style on LSS and ultimately on RE.

How to improve your LSS?

From literature it is known that various training methods may have a positive impact on LSS. This will require consistent training with a multitude of training methods, including not just endurance and interval training, but also running drills, hill training, plyometrics and explosive and strength training, as shown in the box.

Towards an individual running metrics passport

We feel that we are slowly unraveling the complex multifactorial concept of RE. Many factors play a part and the optimum running style will differ from person to person. So, we have started to develop an individual running metrics passport for all the runners in the Team Seven Hills. The idea is that depending on the individual characteristics each person can be coached to improve his running style. The running passport will include physiological data, such as VO2 max, HR max, lactate threshold etcetera, but also the running metrics. The table below gives a first draft of such a running metrics passport.

The data given in the example are not necessarily guidelines for each runner, as the numbers will depend on individual characteristics such as body posture and running form. However, coaches may try to reduce the ECOR and RE of each runner through training.

The results confirm our earlier findings that the Stryd power data can be used very well to optimize training and running technique on a daily basis. Improvements in training should lead to both lower energy cost (ECOR) as well as oxygen cost (RE) of running at a certain speed.

The ECOR can be reduced by increasing the cadence and decreasing the VO. The RE was found to be strongly correlated to LSS: runners with a higher LSS have a superior (lower) RE. So LSS is a useful way for coaches to measure (through proxy) RE.

As ECOR and RE are multifactorial concepts, it is expected that the optimum running style will differ from person to person. So, an individual running metrics passport is required. Coaches and runners may use this passport to try to reduce ECOR and RE through training.

We hope that many readers will join us in this effort. We are curious to the reactions and experiences of the readers, we welcome you to share these at www.thesecretofrunning.com.