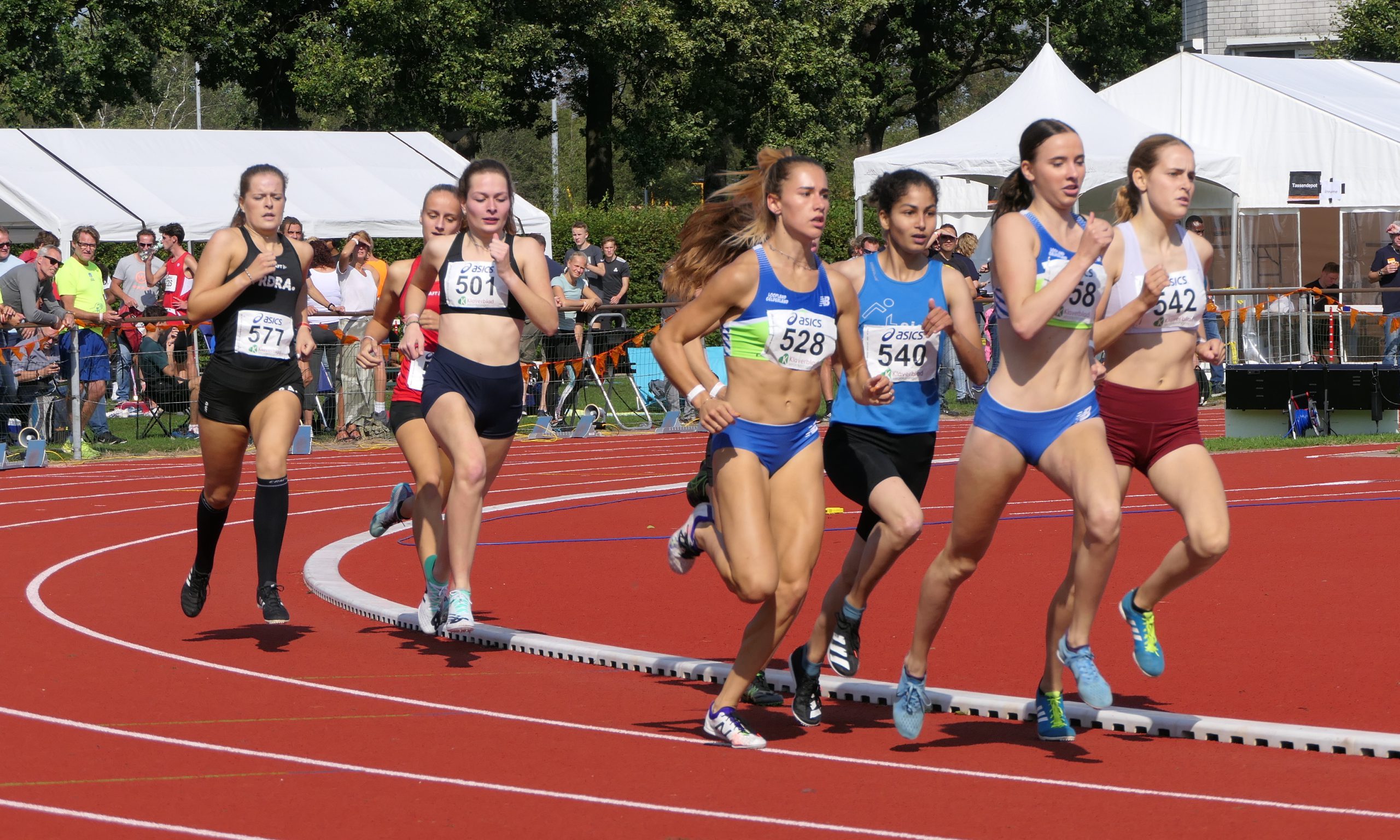 In our book The Secret of Running we explained the power of the 4 energy systems of our human motor. The table below gives a summary of the maximum powers that are theoretically feasible with the world best athletes. First, we refresh for you what energy systems our human engine possesses and the fuel we have in the process. We conclude with a consideration of what you can still do on the last lap and in the final sprint. 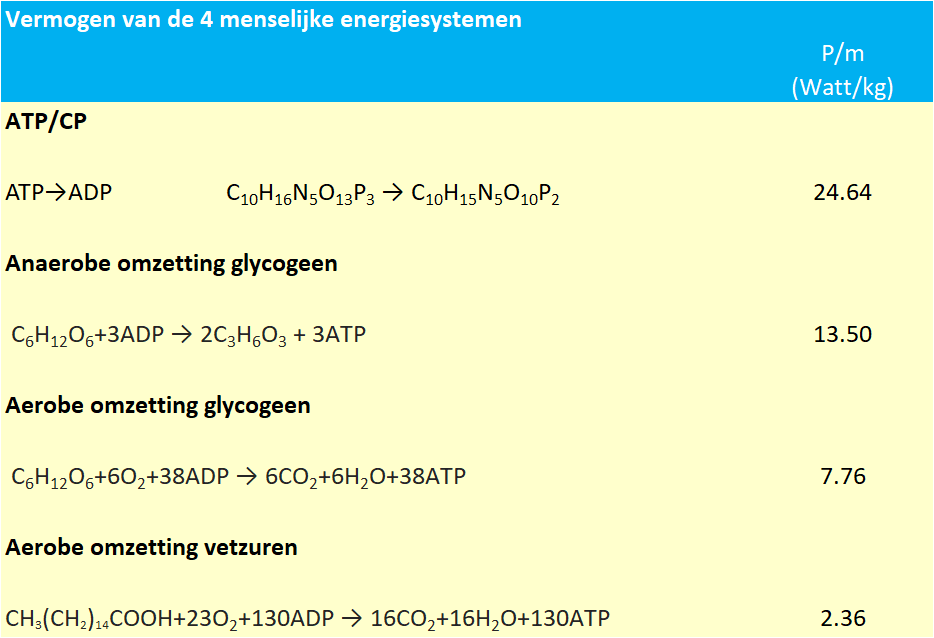 Which energy system is used, the human motor itself automatically controls. At rest and when little power is needed, fatty acids are used as fuel. As more power is needed, so with an increasing speed in running, glycogen (carbohydrates) is also aerobically converted. Fatty acids and glycogen are the normal energy systems in long-distance running. The faster you run, the more power you need and the more glycogen you use. In an earlier article we have calculated what the required power and percentage of glycogen is for the world records on the long distances, see the table:

But what about the (final) sprint?

Today we will discuss the (final) sprint in which the 2 most powerful energy systems also play a role, namely the anaerobic conversion of glycogen and the direct conversion of ATP. As can be seen from the table, with these energy systems you can produce much more power and therefore run faster.

The problem with this is, as is well known, that you can only keep this up for a short time. The anaerobic stock of energy in the muscles is very small, for ATP  in theory 12 kiloJoules and for the anaerobic conversion of glycogen in theory 21 kiloJoules.

In practice, it also appears that only part of this stock can be mobilized, in total order of 20 kiloJoules. With a runner of 60 kg, this is in theory already depleted after 20/60*1000 = 333 meters!

This is also the explanation for the fact that the speed at the track distances above 200 meters (and certainly above 400 meters) decreases rapidly and that the final sprint is always only started in the last lap of 400 meters. As can be seen from the table, however, you can mobilize a much greater power at the (final) sprint, so that the last lap is always run much faster.

How can you calculate how much energy you can mobilize for the final sprint?

In principle, you could do this with muscle biopsies. However, this is not easy and it is also questionable to what extent the results correspond to the actual situation in a race. However, Andrew Jones and Anni Vanhatalo of the University of Exeter (UK) have developed a very practical method to derive this from previous race results  at the distances from 1500 meters to 15 km.

The figure below gives as an example their determination of CS (5.91 m/s, so 21.3 km/h) and D’ (351  meters) for Haile Gebreselassie. The points in the figure show Haile’s PRs at the distances from 2K to 15K. The slope of this line is the CS and the intersection with the Y-axis is the D’.

We think this is a very useful method whose results are credible. Both the CS of 21.3 km/h and the D’ of 352 meters for Haile who has 21.3 km as hour record and was known for his strong final sprint. A big advantage is that in this way everyone can easily plot their own PRs to determine their D’.

How can you calculate the final sprint and the effect of the race tactics?

Recently an interesting article by Brett Kirby and others  appeared in which this was convincingly demonstrated. This is an analysis of the World Athletics Championships 2017 in London. Mo Farah won, as expected, the 10000 meters, but at the 5000 meters he was ‘only’  2nd. In the final sprint, the Ethiopian Muktar  Edris turned out to be faster.

The authors of the paper hypothesized that Edris won against Farah because he could mobilize more energy supplies from the anaerobic systems. To test this, they used Jones and Vanhatalo’s model to calculate the CS and D’ of the participants in the 5000 meters and the 10,000 meters. The results are shown in the tables below.

The table of the 5000 meters immediately shows that Edris had the highest value of D’ (351 meters, against Mo Farah 268 meters). In the final sprint he was stronger than Mo. Farah could have won the race if he had run faster during the entire race, because his CS was higher than  Edris’s. This was also evident from the results of the 10,000 meters, where Farah won in a fast race from a.o. Kanworor  and  Hadis, who had a higher D’, but couldn’t keep up with the pace during the race due to their lower CS. 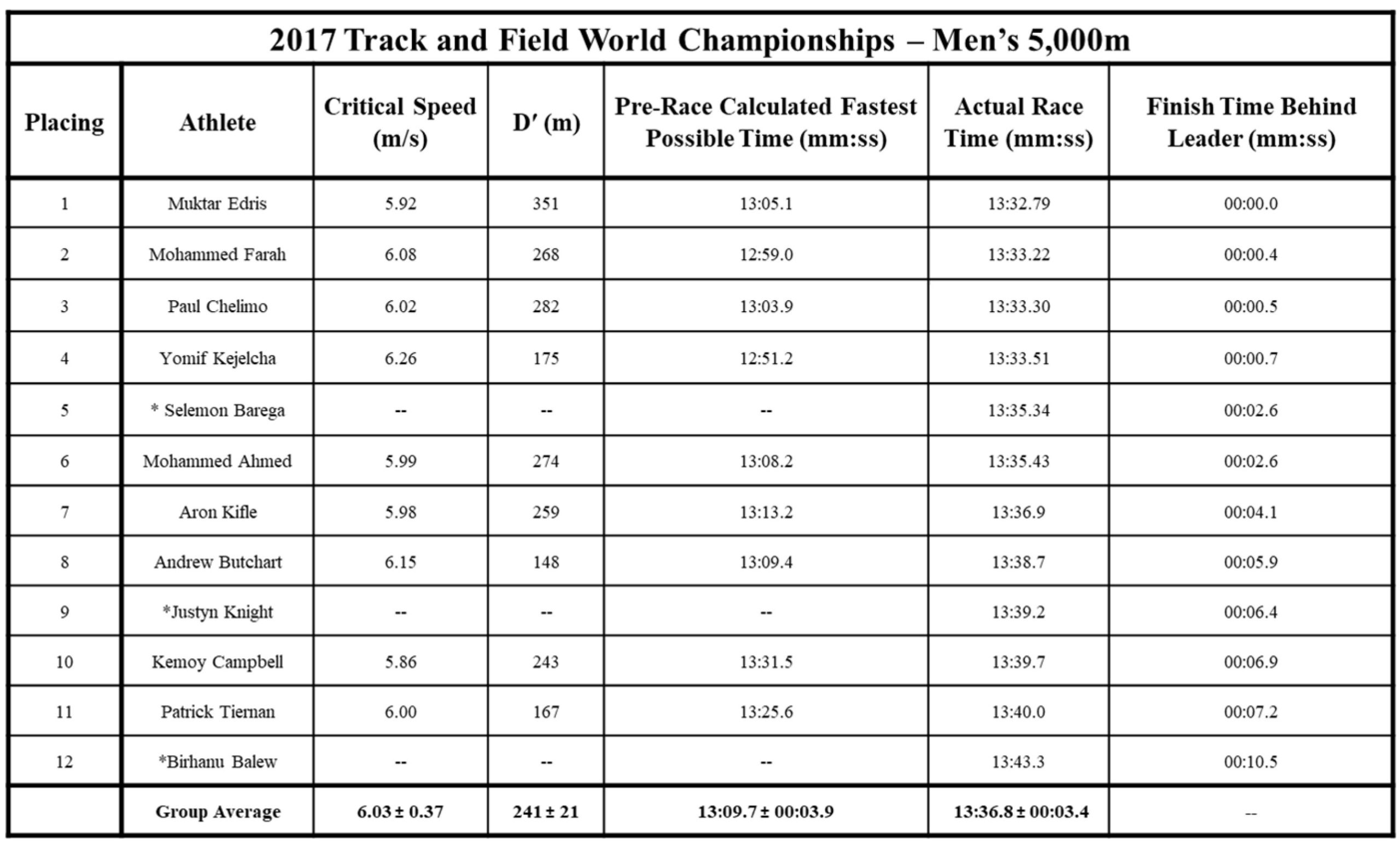 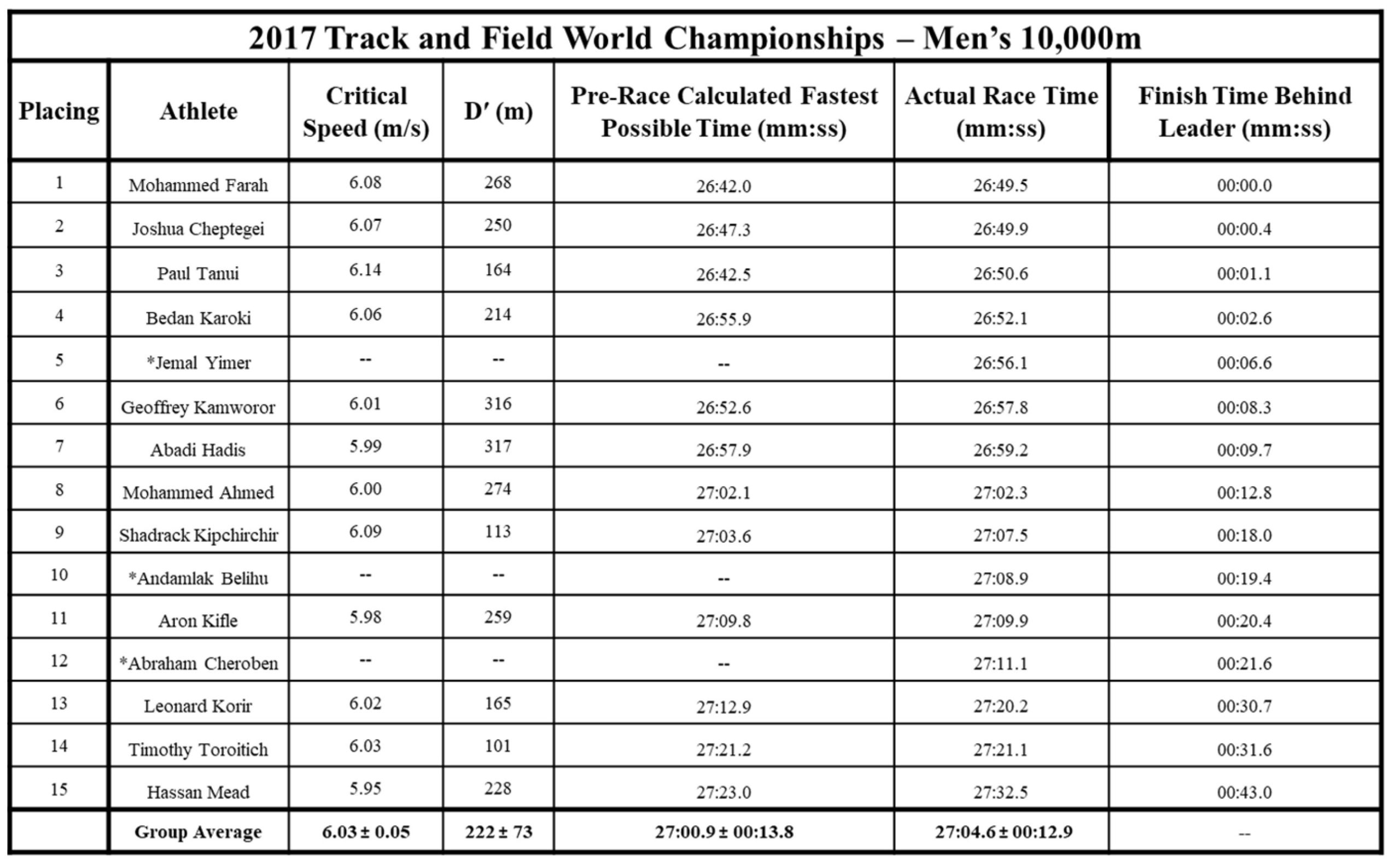 How fast can you go in the last round?

The authors also calculated how the stock of the ‘short-term’ energy systems D’ was consumed during the race. If you are forced to run faster than your critical speed CS during a fast race, D’ decreases. The figures below show the decrease of D’ during the 10,000 meters. 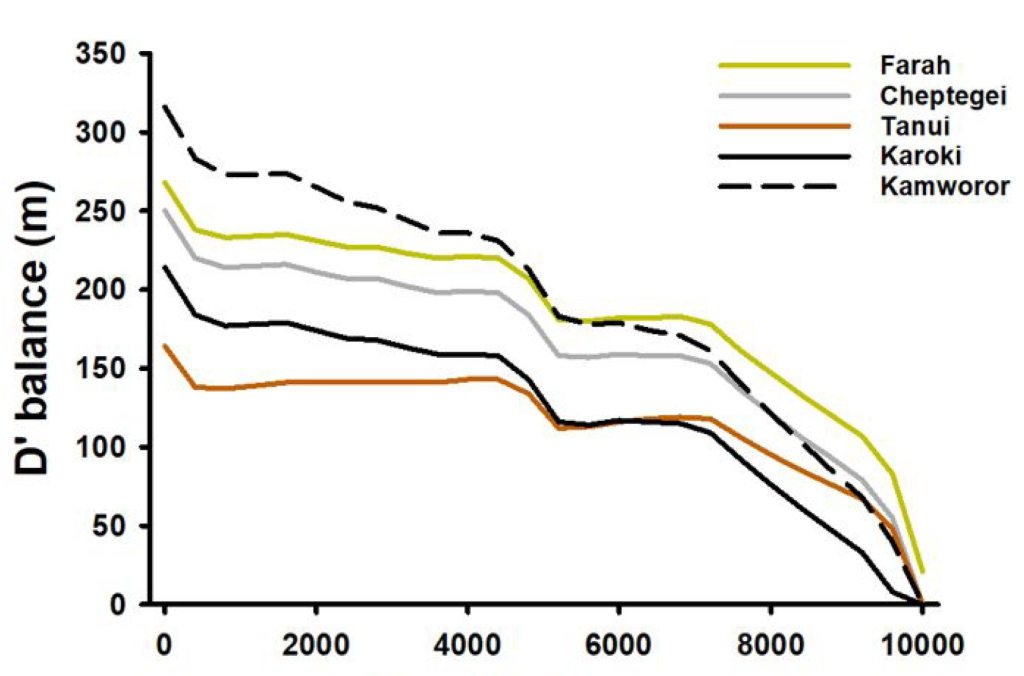 You can clearly see that the Kamworor did  not get a chance in the final sprint despite his high value of D’ at the start. The pace in the race was above his CS, causing his D’ to drop to 0. Mo Farah also had to dig deep, but in the last lap he had just some energy (and therefore a positive D’) left.

We also do not want to withhold a final convincing result from you, namely the relationship between the remaining D’ when entering the last lap and the lap time of the last lap, see the figure. 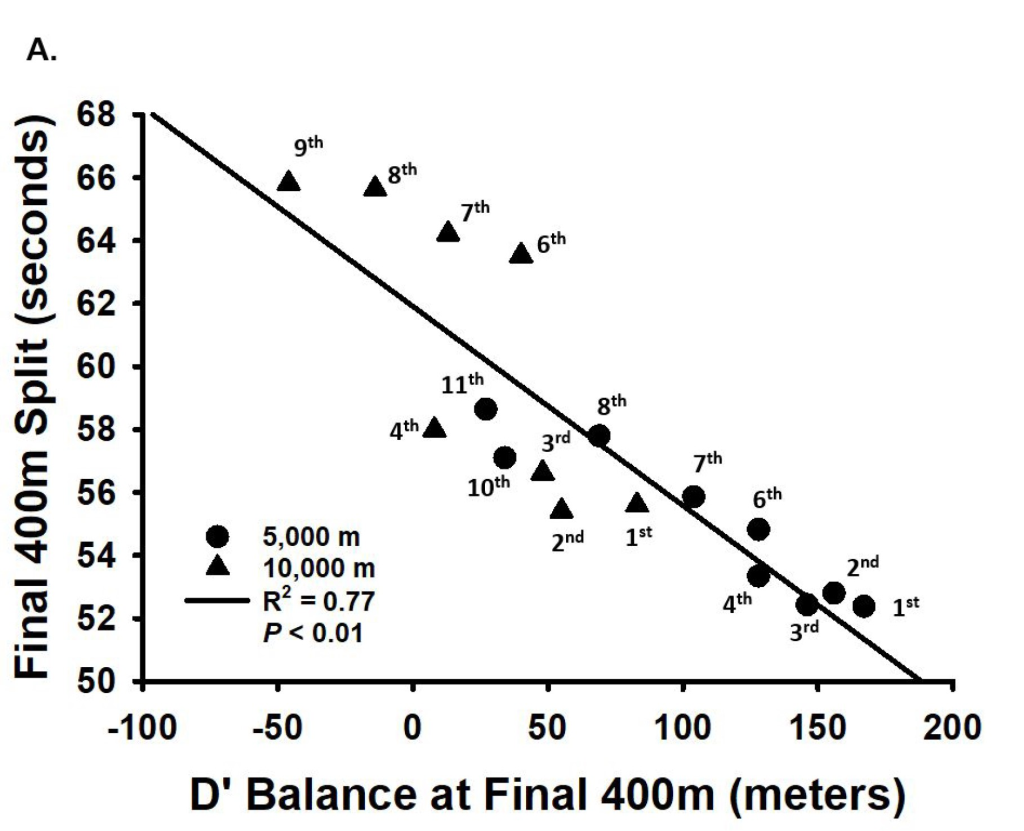 We find this a very impressive relationship with fast lap times of 52 seconds at a remaining D’ of 175 and ‘slow’ lap times of more than 60 seconds, when the D’ is completely used up (0 or less, then one only runs on the aerobic systems with the CS).

How much energy you can mobilize in the final sprint can be easily deduced from your PRs at the distances from 1500 meters to 15K. The result is a theoretical ‘sprint’ distance D’ in meters (order of 150-350 meters).

A higher value means that you basically have a good final kick. However, the result of the race and how fast you can go on the last lap is also determined by the race tactics. In a fast race, your D’ can become exhausted during the race, so you can’t keep up with the pace.

With these calculations it turned out to be possible to convincingly explain why MoFarah could win the 10,000 meters at the 2017 World Athletics Championships, but not the 5000 meters. The 5000 meters was a ‘slow’ race, allowing  Edris  to finish with a high D’ and fast final kick.

There also appeared to be a convincing relationship between the remaining D’ at the start of the last lap and the lap time of the final lap. If you don’t run faster than your CS during the race, you can make maximum use of your final sprint in the last lap.

With the described method, it is in principle even possible to make a prediction of the winner (the one with the best combination of CS and D’) before a race AND to adjust this prediction during the race depending on the pace of the race and the exhaustion of D’ among the runners.