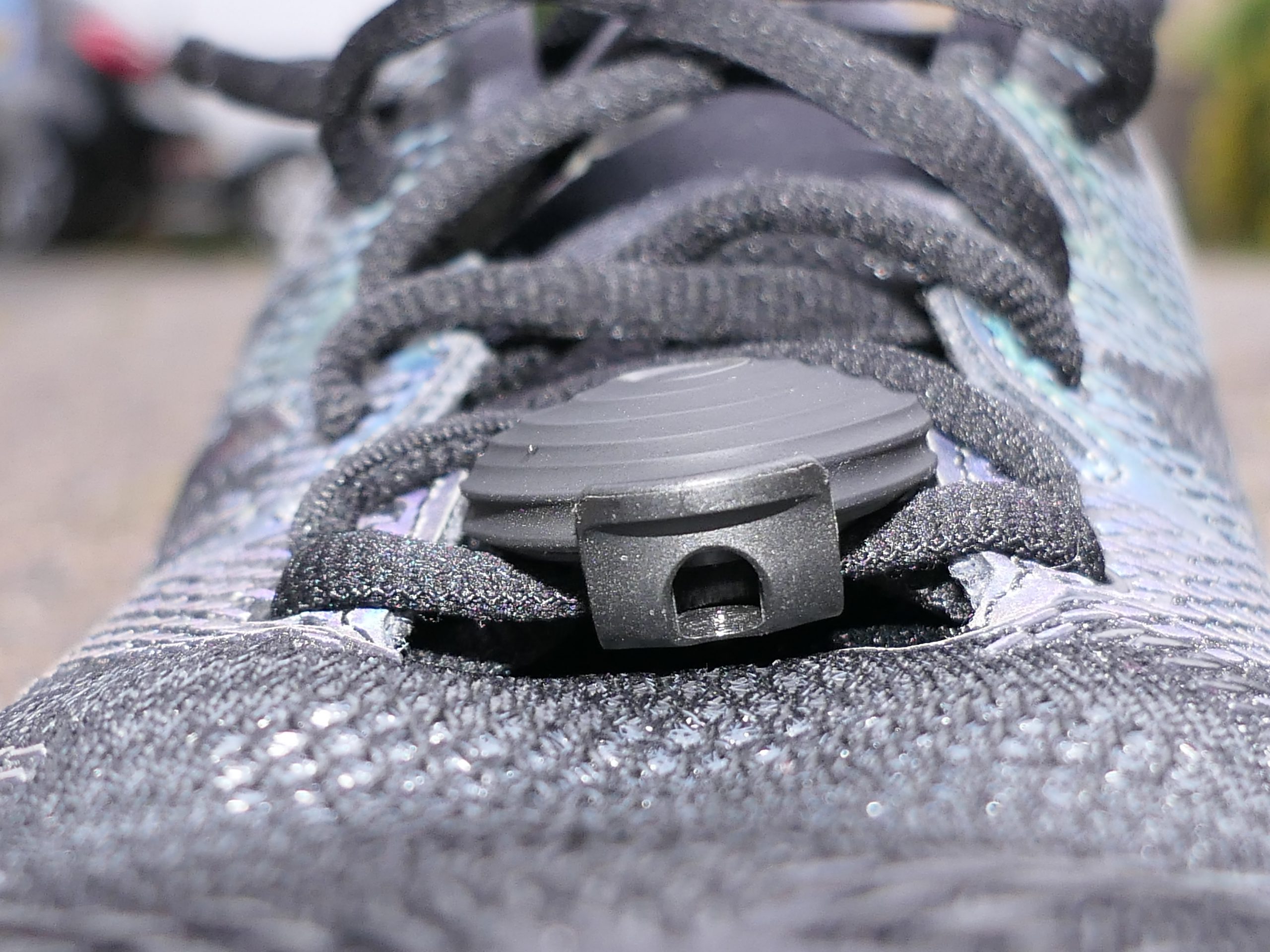 On Friday evening Ron was one of the first to pick up his new Stryd v3 with “wind port” at the DHL ServicePoint. According to Stryd, the interest is so great that the first production batch was already sold out upon delivery. Stryd says they are making every effort to meet the demand.

Saturday it promised to be a windy day. Ideal for testing the new Stryd v3 in practice. That was also the Saturday that part of the roof of the stadium of the Dutch Alkmaar football club AZ partly collapsed due to the wind. Exactly around that time, Ron used his new Stryd for the first practical test. Afterwards the media talked about a summer storm because of the gusts of wind. No shortage of wind …

The new Stryd looks almost the same as the previous versions v1 and v2. The blogging runner DCRainmaker has just evaluated all the improvements in a review. We are particularly interested in the small hole at the bottom, between the two contact points of the new charger. That hole is the much-discussed “wind port”.

The wind port works similar to a pitot-tube. A pitot-tube is an accurate instrument for measuring the speed of a gas or liquid flow. It is widely used in the aircraft industry for speed measurements. We also saw them in the wind tunnel of the Netherlands Air and Space Center (NLR) where we met first the new Stryd.

The new Stryd is also attached to the shoelaces with a clip. In that clip an opening has now been made at the front with a raised edge behind it so that the wind port can measure air pressure differences. The new Stryd needs these measurements to determine the air resistance and to calculate the influence of the wind on your running power. We show these elements in the image.

That Saturday afternoon the wind was blowing at wind force 5. That means wind speeds of 29 to 38 km per hour. We have explained earlier how the wind affects the air-resistance. We had the impression that at times it was blowing faster than wind force 5. That was particularly the case with interval 9 in the graph below with average power per interval. Ron really had to power up at interval 9 to keep his pace!

The pace was kept constant at 5:45/km during all intervals, both with head wind and with tail wind. That is not particularly fast, but this test was about the impact of the wind.

Intervals 1 to 8 (Ron ran four times back and forth) was on a flat stretch of cycle path along the Valleikanaal (Gelderse Valley channel). That was chosen because the southwest wind would provide a head wind. But the wind was just turning west. The track was therefore suddenly in the lee of the dyke with trees on the other side of the water. The wind was nevertheless noticeable and came back in the running power (in Watts) that the new Stryd registered. The good news from this part of the test is that the Stryd also records small differences in wind speed. 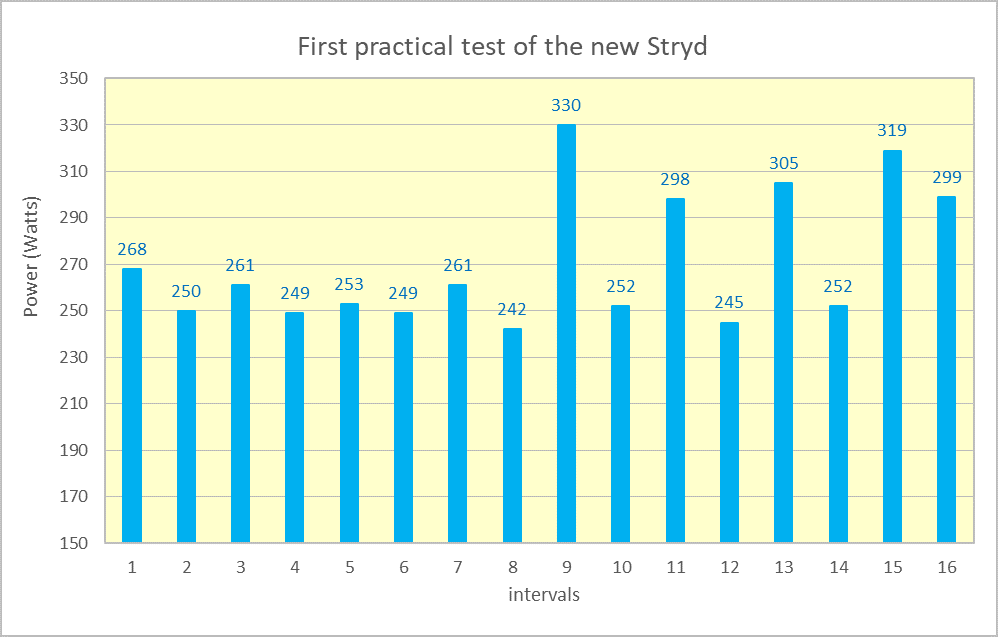 The second part of the test concerns intervals 9 to 16 on an asphalted road in the open terrain of the Gelderse Valley. The wind came almost fully head on, but varied in strength. The power values ​​are nicely in the range of what was calculated theoretically. It also fits well with the perceived effort of the different intervals.

The following clip of Stryd PowerCenter shows that Ron kept the pace (blue line) fairly constant. The purple line is the heartbeat. Clearly more work had to be done with ahead wind than with a tail wind. The yellow line is the power. Power lines always vary slightly. It is noted that the wind gusts caused some some variability. The Stryd seems to be able to follow the wind variations well!

The intervals back Ron kept the same pace and you can see from the falling heartbeat that this stretch was much easier with the tail wind.

So far we can endorse the good functioning of the new Stryd qualitatively. Of course we also needed to look at this quantitatively by checking the results with theory. The tricky part is that we don’t know exactly how hard the wind blew at each of the intervals. We have of course tried to get a feel for this. We show that in the graph below.

What have we done? We know that the new Stryd should represent the total power Pt and is the sum of the running resistance Pr and air-resistance Pa.

Of course the speed was slightly different per interval. We included this in the Excel and then subtracted it from the total power Pt according to Stryd per interval.

This yielded the blue air resistances in the graph, Pt-Pr = Pa.

At intervals 9, 10 and 15, the wind blew considerably harder. We have used 10.6 m/s for this and 8.6 m/s for the other intervals. We have calculated Intervals 9 through 16 in this way. This yields the orange theoretical air-resistances. The graph confirms that you can have 90 Watts disadvantage at  wind force 5 in a head wind and the same wind only brings you a 15 Watts advantage as a tail wind.

The intervals 1 to 8 were along the Valley Canal, with the wind protection described earlier in this paper and with wind that stood at an angle to the track. We have used 45 degrees for the angle. We have assumed 60% for the shelter. Thus, in the theoretical calculation, the tailwind appears to almost compensate for the ‘own’ wind. Consequently, the situation was by chance comparable to running on a treadmill.

With a head wind, the graph shows that the Stryd fits well with the theory. The measures advantage of a tail wind is still insufficient. We have informed Stryd of these results. They assured us that this has their attention. Their explanation gives us the confidence that one of the future firmware updates will correct the tail wind issure

For the calculation of the theoretical values ​​we refer for the sake of brevity to the information in our book ‘The Secret of Running’.

As far as we are concerned, the new Stryd v3 passed the first test. The Stryd provides realistic power values. The Stryd also responds well to differences in wind speed, even with small differences. It is unfortunate that the Stryd handles tailwind less well, but because of the limited influence of the tail wind on running power, this is less important. In addition, Stryd indicates that this has their attention and will be improved through a future firmware update.