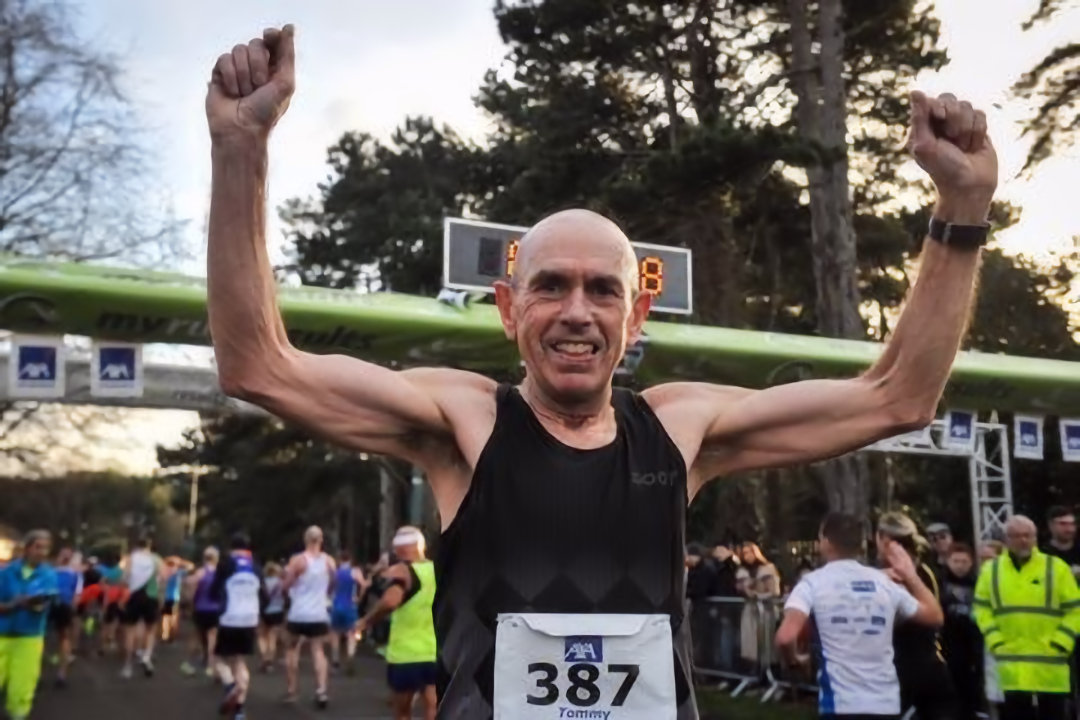 On Sunday 25 October 2020, 60-year-old Irishman Tommy Hughes (born 8 January 1960) crushed the world record in the M60 marathon. This was in the “Down Royal Marathon” in Lisburn, Northern Ireland. With a phenomenal time of 2:30:02 he improved the old world record by no less than 6 minutes. The Japanese Yoshihisa Hosaka had the record to his name since 2009. It goes without saying that this extraterrestrial achievement is world news. Our readers will undoubtedly be amazed by this achievement, just like we are: how is it possible to run another marathon in 2.5 hours at the age of 60?

In this article we will take a closer look at the performance of this super runner. To illustrate that Tommy Hughes is not the only one with special achievements, we also pay attention to our Dutch pride Cees Stolwijk, about whom we already wrote an article.

Who is Tommy Hughes from Ireland?

Tommy Hughes started running in 1981. He wanted to drop out as a player of a Gaelic soccer team – a cross between soccer and rugby. Tommy soon found out that he was a much better runner than footballer.

In 1992 he competed in the Barcelona Olympics marathon for Ireland. His PB is at 2:13:15, run during the Marrakech Marathon in 1991, qualifying for the Olympic Games. After the Olympics, running got a bit out of hand and he focused on his family (he had 4 children) and social career (as an electrician).

After the age of 50 he suffered from depression and an alcohol problem. With the help of his wife he was able to overcome this, partly because medical research showed that the problems were caused by his thyroid gland. After that was surgically removed in February 2018, Tommy was able to train again and the results were spectacular! In Rotterdam he already ran a time of 2:30 in 2019 and the highlight followed in the Frankfurt marathon in September 2019. Not only did he run a dream time of 2:27:52 at the age of 59, but the best part is that he ran that race together with his son. Eoin Hughes was then 34 years old and finished in 2:31:30. Their combined time of 4:59.22 is the fastest time ever for a father-son duo in the marathon! What a dream scenario and what a euphoria they both must have felt!

He was planning to run under 2:30 this year in Berlin, but that didn’t happen because of the Covid pandemic. In Northern Ireland he now stayed only 3 seconds away from the magic limit of 2:30.

Besides the marathon, Tommy Hughes also runs phenomenal times on other distances. In the table below we have compared his recent achievements with the official world records of the World Masters Athletics.

The table clearly shows that Tommy is good at all distances. So he already has the world records for the half marathon and the whole marathon, but his recent 1500 meter time is not bad either!

Our Dutch super runner Cees Stolwijk has compared his own times with those of Tommy Hughes in the table below.

The ages mentioned are the ages at which Cees Stolwijk delivered his performance: Tommy Hughes’ are all from this year, so when he was 60 years old. We see that Cees has to take his hat off for Tommy at all distances. At the shorter distances the difference is not that big, but at the marathon the difference is considerable. In our earlier article about Cees, we had already seen that his marathon performances are always a bit less than his times on the shorter distances.

Below we give a brief update of Cees’ performance, which turned 70 this year and immediately made 2020 another top year.

Who is Cees Stolwijk: the Dutch super runner?

Cees Stolwijk only started recreational running when he was 45 years old. He ran his first marathon in 3:51:55. He considered himself a recreational runner and looked up to runners who could run the marathon under 3 hours. But Cees persevered and slowly got better and better. At the age of 50 he became a member of athletics club Altis in Amersfoort and trained with the recreational runners. After 4 years he took the next step and started to train with the successful competition group Altis Masters. On his 55th he became Dutch Champion for the first time, he won the marathon in Utrecht in 2:56:10, so almost 1 hour faster than on his 45th!

Even after his 55th Cees still got better. On all distances, from the 800 meters up to and including the marathon, he belongs since then to the Dutch national top and since his 60th he competes internationally for the medals. At 65 he reached the absolute top here. He improved 2 world records and became World Champion in Lyon on the cross, the 10.000 meters and the marathon.

The older, the faster!

The uniqueness of Cees’ performance curve has already been outlined above. He manages to get better every year and thus beat time figuratively speaking! We have already seen the statistics of Prof. Sterken, which show that ordinary people are slowing down by 0.8% a year from the age of 45. In our book ‘The Secret of Running’ we show exactly how this works.

So ordinary people are on average about 15% slower at the age of 65 than at the age of 45. However, Cees is much faster at 65 than at 45. In the table below we give an overview of the amazing series of achievements of Cees on the road in the past 20 years. 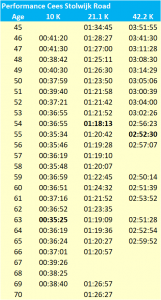 The table shows very clearly the continuous progress of Cees after a relatively modest beginning. The special thing about Cees, of course, is that where others are slowing down over the years, he has been able to at least keep his times constant for 25 years and even improve them regularly.

For the past 15 years Cees has mainly focused on the national and international championships on the track and indoors. This has led to phenomenal times on the regular distances from the tables below. 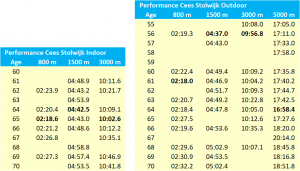 On January 10, 2020 Cees turned 70, so he hoped to have another top year with records in the new age group M70. The start was immediately promising with 3 Dutch titles (1500 meters and 3000 meters indoor, and the cross), where he improved 2 world records (on the 1500 and 3000 indoor). Just before the intelligent lockdown he also ran a Dutch record in the half marathon (1:26:27). Unfortunately all races were then cancelled, including the World Championships in Toronto and the European Championships in Portugal. Cees was in top form and would certainly have performed well there. In the summer Cees was slightly injured, so he could only run his first matches again in October. Although the shape wasn’t quite there yet, he improved the Dutch record M70 on both the 5000 and the 10.000 meters. In summary, despite the Covid pandemic and his injury, Cees is satisfied with his performance at the age of 70. He conquered 3 Dutch titles and improved 5 Dutch records.

What else is Cees going to give his fans and athletics enthusiasts in the coming years? We sincerely hope that he will be able to maintain his amazing performance curve. Cees himself is as always very modest in his expectations. He’s more than satisfied with what he’s accomplished and knows there are other things in life, like his grandchildren he loves to look after.

Cees is planning to continue training and he wants to participate in next year’s World Championships and possibly run a marathon again, maybe Berlin 2021. However, he is also a realist and knows that trees cannot always grow to the sky. In any case, he will continue to enjoy his sport and his sports friends..